Crossout: The Good & The Bad

Crossout: The Good & The Bad

Crossout is a free to play post-apocalyptic themed shooter where players acquire scrap resources and components to assemble their own battle vehicles and duke it out in team oriented PVP matches. With extensively customizable builds did the developers make something amazing from that pile of scrap, or are we left with a hunk of junk? Let’s find out!

Post-Apocalyptic Setting - Like something out of the Mad Max films the game has an awesome setting, with multiple maps and modes showing off various scorched Earth style maps with desert plains, abandoned facilities and fractured highways filled with bandits

Multiple Game Modes - Primarily a team based PVP game with various game modes, players can even work alongside each other in co-op battles against AI; taking out waves of enemies in horde mode or escorting an AI vehicle across a map and fighting off bandits

Targetable Components - Taking these vehicles out into battle, each individual component that is attached to the vehicle can be destroyed in combat; blow off weapons and wheels to leave an opponent defenseless and vulnerable

Grindy Content/Crafting - To acquire the various parts and components to build a new/unique vehicle then players need to earn them through playing matches; it takes quite a while to build up a good library of components, which means playing the same content over and over

Short Matches - Vehicles generally feel quite weak and easy to destroy (heavy armor not permitting) and so you can be knocked out of a game very early on quite easily and end up back in the garage; matches being a little longer would be more entertaining

Rarity Quality - Ranging from Common (White) up to Legendary (Orange), components such as weapons can be far better or worse; so weapons aren't made to be balanced, some are made to be far more powerful than others and then it becomes a game of gear instead of interesting vehicle builds and skill

Garage/Blueprint Slots - Players can only have TWO available vehicles in their garage that they have created, they can turn vehicles into Blueprints (but can only have 5, which includes the signature faction vehicle blueprints as well), but they can't switch between these at the beginning of a match without rebuilding them

Map Repetition – Whilst there are a fairly decent number of maps (albeit these are divided between PVP and PVE maps), due to the short game times you cycle through maps quite quickly and it soon feels like you are playing the same maps all the time 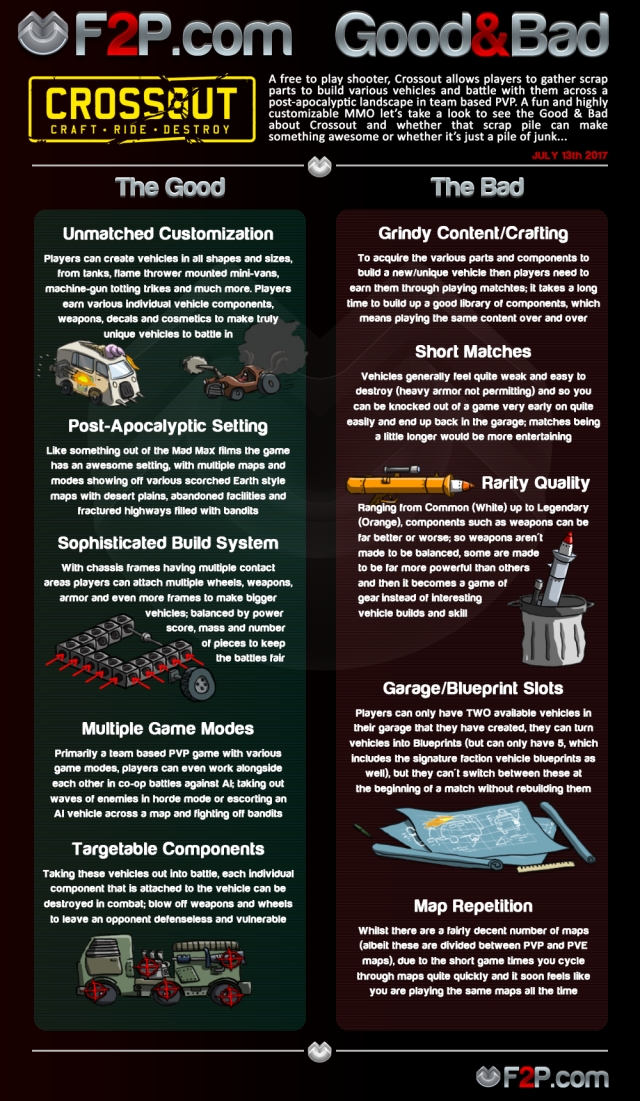