Protracted gameplay could put people off, though there are multiple modes where this is probably less of an issue

We took some time out to try the third person MOBA from Hi-Rez studios: Smite, a battle between gods and immortals from all manner of religion and mythology in a fresh MOBA setting with a few original twists. Let’s be honest the MOBA genre is filled with plenty of games trying (not particularly hard) to reinvent the wheel and many come across as being the same type of game in a different skin. With Smite we honestly feel the developers have managed to do something different and the third person perspective really does add something new to the game strategy wise.

And have been the biggest MOBA player myself, only having dipped my feet slightly in the League of Legends (LoL) pool and testing out a few new games such as Infinite Crisis and Merc Elite, whilst they all offer something different to the genre I really did feel like Smite played completely differently. Instantly I was constantly having to look over my shoulder, never quite getting the hang of comes to checking the overhead map I was paranoid that someone was coming up behind me going to fly from the jungle and invariably that was the case as a repeatedly got my butt handed to me on many occasions.

The core of the game is very familiar to LoL, you have lanes, towers, bases and minions that you must fight past, although the different variations of these dependent on which game modes you play as there are some that utilise only one lane and side jungles, one lane and no jungles, or the classic three lane and jungle. For our test we try out the latter, sticking to what we know in a classic three lane game, although prior to this really check out the tutorial mode pre-recording our first look video, but other than the controls being WASD keyboard focused it was pretty simple to pick up and we knew what to expect. 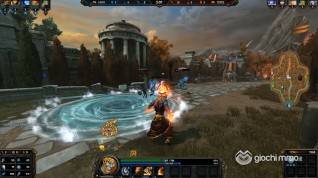 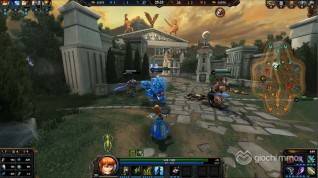 There are a few key additions to the game that changes the core expectation slightly, primarily this is with the Phoenix “towers” and the Titans. Each team has a Titan in their base, and AI controlled NPC that the enemy has to kill in order to claim victory, these Titans hit hard and have a lot of hp and really require a team to drop them successfully and creates an almost sub game to the battle. The Phoenix’s stand outside the bases at the end of each lane and act as super towers that hit harder than those found in the lanes, not only that but they constantly regenerate their own hp and even if they are destroyed they will respond a few minutes later. Second to this when a Phoenix is destroyed then the enemy minions that spawn become flaming minions that have an improved health pool and attack.

For our game even in the character selection lobby and chat between the team we realised that none of us have played Smite before and so were already prepared for taking a thrashing (that said, we don’t know how experienced give the team were either, the one did have a non-starter God already accessed…) The match started and into noob fashion we all run off and pre-much did our own thing, barely communicating and just tried out the game to see how it played and in all honesty it was pretty fun.

We quickly lost the majority of our towers in the lanes, but some reason the enemy really struggled to push past our Phoenixes, taking one down resources and an even getting a few shots on the Titan before we respawn and managed to push them back again. After over 30 minutes the battle will still going and the enemy still have managed to claim the victory, even though their position hadn’t changed much in the last 15 minutes to register and seem to be able to make that final push. For many players this is one of the biggest problems with MOBA games in that they are just not casual enough to pick up and play a couple of games and players can really be locked into a stalemate battle far too long. That said even through our obviously crushing defeat and protracted game length it was still extremely enjoyable.