Marvel Heroes: The Good & The Bad

Marvel Heroes: The Good & The Bad

Marvel Heroes (2016) has been around for a few years now and this superhero Action RPG adventure is still alive and kicking and in many ways stronger than ever. With exciting combat, huge amounts of customization and the chance to play with, alongside and against some of the most loved and hated characters of the Marvel Universe, what could possibly be bad with the game? Well let’s see..

50+ Characters – The game does a fairly decent job of covering a wide spectrum of Marvel heroes (and some villains) and covers the obvious releases of the big movie franchises (Guardians of the Galaxy, The Avengers, X-Men) but also some fairly unknown characters to most that are big hits in the comics (Squirrel Girl, Nova, Taskmaster)

Unique Character Abilities – Each hero is customizable in various ways, with players choosing which powers to pick up for their characters, the different builds still stay true to the feel of the character but offer completely different playstyles between each hero

Team-Up System – Players can co-op with their own AI partner in Team-Ups, some different famous characters from Marvel that will join players on their quests, who themselves can be upgraded and customized to complement their played hero

ARPG – The developers have most definitely not forgotten to add the Action to their ARPG, combat is extremely fast paced and dynamic, providing lots of challenges and a degree of skill focusing on timing, positioning and actively dodging enemy attacks

Costumes and Gear – Players can arm themselves with a whole host of armor parts, weapons and items for their missions, even able to craft much of their gear themselves, as well as this each hero has their own unique cosmetic outfits that can be worn showing off different looks of the character through the ages from current iterations to classic comics and even some quirky random costumes

PVP System – Pretty much a broken system in every way, it’s buggy, boring and imbalanced and in turn has made even most PVP lovers just shy away from the system, leaving it unpopulated and hard to find a match, and with no one playing in PVP it has become a system that is at the bottom of the priority pile for the developers

David Brevik Leaving – The creator of Blizzard’s ARPG Diablo, Brevik started as the Creative Director for Marvel Heroes, becoming the President and COO and then the CEO; in January 2016 he left the company to start his own indie development studio; a big loss for Marvel Heroes to see him go

Overly Simple Bosses – With the exception of the odd boss, most just feel like they are quite standard battles but with more and more hitpoints thrown on top of them to increase the “challenge”

Costume and Inventory – Marvel Heroes is quite renowned for having an extremely taxing inventory, with so many collectibles, crafting materials, various types of gear your space is already taken up; throw on top of that the six different costumes many characters can have then the game is in dire need of a Wardrobe inventory just for cosmetics

Popular Character Focus – Whilst financially it makes sense, and it draws in new players, the games heroes are at times too lead by the blockbuster movies and current TV shows, with the main heroes of these shows getting more focus in game (because they become popular picks) for balances and costumes, leaving some of the other heroes behind 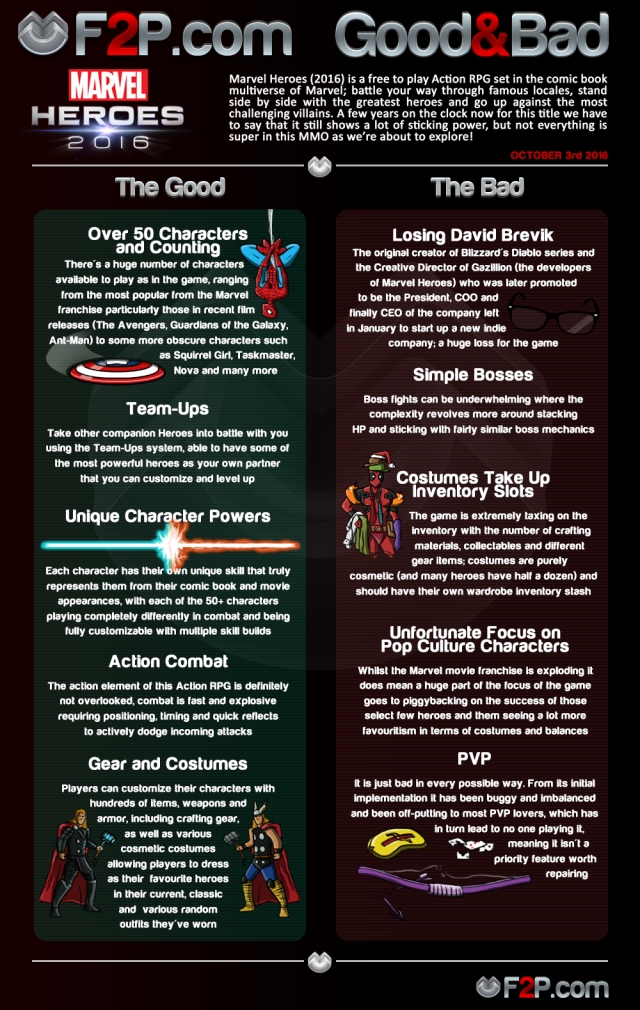