Hearthstone: The Good & The Bad

Hearthstone: The Good & The Bad

Set in the Warcraft universe, Hearthstone is a free to play cross-platform card collecting MMO where players build up decks of cards from the various heroes, enemies and characters from the franchise and battle in 1 v 1 matches. The game has pulled in a huge crowd of followers, but when the cards fall what’s Good & Bad about it?

Awesome Graphics - The game has its own style which emulates the more cartoony style of Warcraft but without feeling childish, from the UI and animations to the card artwork the game looks fantastic

Fast Gameplay - With the more casual approach to Hearthstone in comparison to other Card Trading/Collecting Games, with the lack of turns and phases, it means games are a lot more fast paced

Multiple Class Heroes - Taking from the iconic World of Warcraft classes players can build different decks around key characters that define these classes, having their own unique abilities and cards to play with

Skill vs RNG Balance - Whilst there's always going to be a an element of luck of the draw when it comes to the cards in your hand, combined with having a high tier deck, the fact that some players are consistently at the top of the ranks show that the game does still have a skill element to it and takes some practice

Multiple Game Modes - From Arena Battles where players get rewards for winning as many matches as possible, to Tavern Brawls with their own unique rules that change every few days, with both ranked and unranked play

Mobile Play - Blizzard identified that Hearthstone is the kind of game players will want to play on the go, with the Android and iOS compatibility players have full access to the game to play matches and craft

Meta Decks - At high levels of play there is little to no deviation between top tier decks, with players having the exact same deck build for specific classes, to reach the top ranks players need to essentially stick to a very strict list and removing any original decks and some cards are nearly always part of a deck because they are so strong

F2P Ceiling - Whilst the game is free to play, and players can advance pretty far in the game and reach upper tiers, ultimately to go fully competitive players will need to drop a fair bit of cash to build truly competitive decks capable of reaching the upper echelons

No Chat Options - Players are reduced to only a few pre-made phrases to talk to each other with no options for chat, presumably to avoid abusive chat to each other; but isn't that what the mute button is for?

Limited Co-op Modes -There's no Co-op mode for PVE or PVP, which plenty of other TCG/CCGs have and would be a great addition to the game

Simple Mechanics - For those big into trading card games who grew up with games such as Magic The Gathering, the lack of phases with Hearthstone provides a much more casual gameplay and lack of complexity that just isn't for everyone

EU & UK Price Hike - Recently the prices on card packs for European (Euro) and UK (Pound) players has increased, the EU has seen price increases at 11% across the board whereas UK players now pay between 21% and up to 50% more depending on how many packs they buy 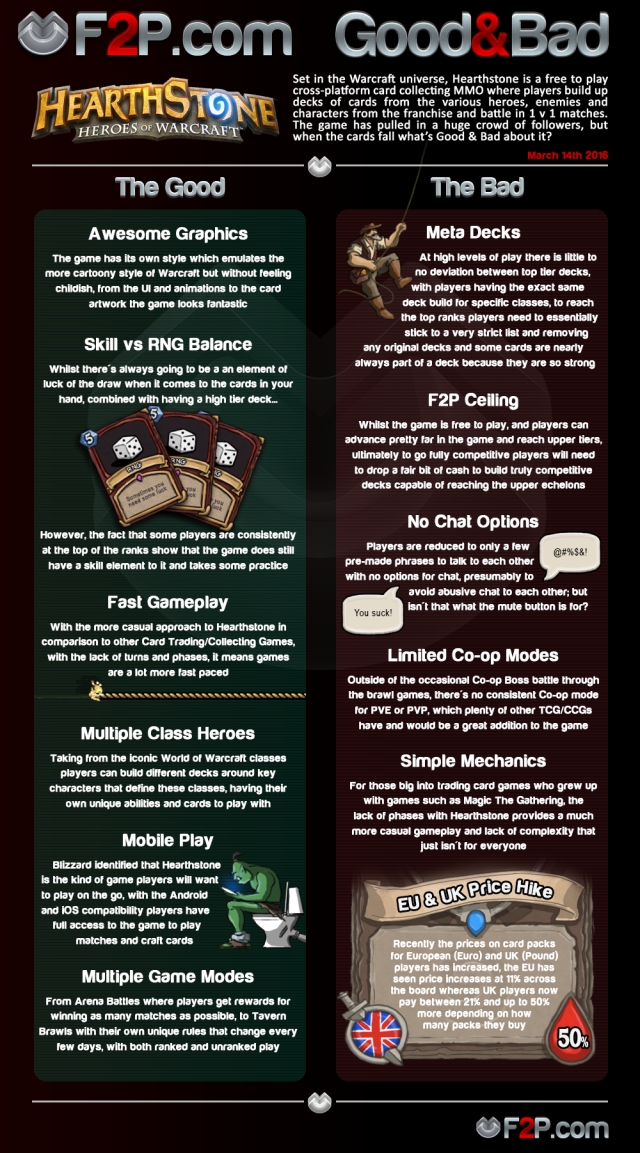