In Goodgame Empire players are the rulers of a medieval keep where they are responsible for protecting the populous, acquiring and managing resources, constructing various buildings and building up an army to defend their territory and invade neighbouring rivals. The game has in depth PVE elements with AI factions and ongoing PVP conflict where players form Alliances and rivalries against each other.

As we put Goodgame Empire through our F2P Meter we’ll find out how free the game really is: 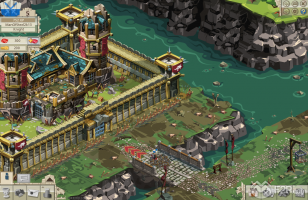 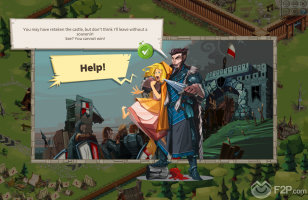 Does the game require an initial purchase?
'No'
The game can be accessed for free through your web browser after an account registration.


Does the game require any continued paid subscription?
'No'
There aren’t any subscription options currently available.


Does the game require spending money on DLC packs or expansions?
'No'
There aren’t any DLC or expansion available for the game, all updates and patches are offered for free.


Does the game support micro-transactions? Can anything be purchased in-game using real world money?
'Yes' -5%
Players have the ability to purchase the premium Rubies currency using real worl cash, though this currency is available by playing the game and completing certain tasks, though it is acquired at a slower rate.


Do any of the micro-transactions give players any advantages?
No (but…) -10%
Rubies can be spent on instantly completing various builds in a city, from buildings, to units and defenses, there are also certain constructions that can only be bought using Rubies as opposed to using standard resources and currency. A Ruby Mine can be purchased by players under level 25 for 30,000 Rubies, that will give them 250 Rubies per day for a total of 360 days (a net profit of 60,000 Rubies). Although Rubies can be earned in game, the main advantage is the ease at which players can buy them which gives them a speed advantage building up their empire in comparison to other players.


Is the user interface customization restricted to paid options?
'No'
The UI cannot be modified.


Does the game give access to all available Factions?
'Yes'
The game lacks any choice on race or class.


Does the game require have limitations to how the 'Auction House' /Market/Trade system is accessed?
'No'
The in-game Market building is restricted by resources and level pre-reqs, and allows players to trade between each other, but is otherwise free to purchase.


Are personal inventory and/or bank slots limited at all?
'No'
Inventory comes in the form of Storage, a building that can be used to store resources, this building is only restricted by level requirements and the resources needed to build it, but can otherwise be accessed freely.


Are all dungeons and zones accessible without purchases?
'Yes'
There are no area restrictions to players in the game.


Does the game restrict high endgame content (PVE, Raids or PvP)?
'No'
End game PVP and PVE is available to all free to play accounts without any restriction.


Can the game be fully enjoyed without ever having to spend a ‘penny’?
'Yes' +10%
The game is completely free to play and the advantages that are in place for Rubies premium currency can be mitigated by spending a lot of time playing the game; casual players who don’t want to spend cash will see an obvious penalty in comparison to paying players, but otherwise there is no real pay to win in place.