InnoGames, Germany's leading developer and publisher of online and mobile games, invites players to the May Celebrations in the building strategy game Elvenar. It is time for festive decorations when players join in the celebration of spring and fertility. Young and old alike gather to take a look at the majestic May Tree, which blooms in the most beautiful of colors. The May Celebrations take place from May 11th through the 30th.

A trailer for the May Celebrations is available here on F2P.com:

Players will be rewarded with all kinds of prizes for their participation in the event. By completing quests and searching the outskirts of their city, players can find Spring Seeds that can be used to open Flowers. Each opened Flower contains a random reward and provides Life Force. This Life Force in turn can be used to acquire Blossoms. Once each Blossom on the May Tree blooms, the next Grand Prize is unlocked.

Every day there is a set of 16 Flowers, which can be opened with the Spring Seeds. These Flowers contain one of many possible rewards, including daily rewards, consisting of a collection of new and recurring prizes. Three of the 16 Flowers contain a special item, each with a different special effect: 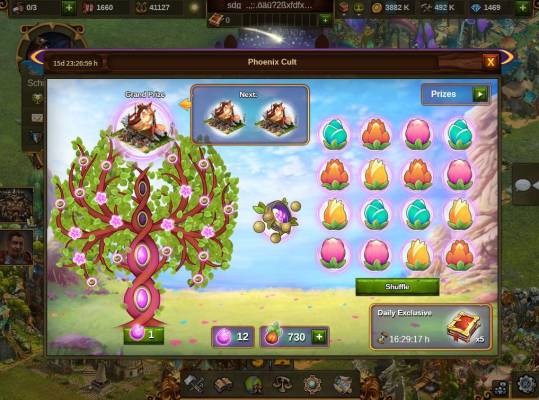 Once all 20 Flowers of the May Tree have been opened, the tree is complete and players will be rewarded with the next grand prize, which includes the festive May Tree Artifacts that can be used to create a very personal and festive May Tree building.

The May Celebrations bring with them some new mechanics. One of them is the Daily Login Reward, which gives players enough Spring Seeds to open a Flower immediately. Daily play of Elvenar rewards players and allows them to open even more Flowers.

Another new mechanic comes in the form of the Quest Milestones. The more quests players complete, the more additional rewards they can unlock, including more May Tree Artifacts. There is also a limited story questline. Once this is finished, players will unlock the additional episodic quest series. With each new day of the event, one of these quests will be added to the series of available quests. Each quest rewards players with ten Spring Seeds.

Elvenar is available for the browser and on iOS and Android devices and is free to play.

Elvenar is a city-building Strategy-MMO set in a fantasy world. Tasked with creating a flourishing city, players can choose between Elves or Humans. This choice affects the appearance of the cities and their inhabitants, as well as the available technologies and units. The elves live in the midst of magical creatures in harmony with nature, while humans are ambitious builders and engineers. Between managing resources, leveling up buildings and unlocking new perks, players should also pay attention to the multiplayer-map if they want to find valuable relics. Yet, players might have to fight numerous fantastic creatures for them. Since its release in May 2015, Elvenar has been receiving continuous content updates, and as a cross-platform MMORTS, players can switch between browser, iOS and Android devices at any time.