DarkOrbit Reloaded: The Good & The Bad

DarkOrbit Reloaded: The Good & The Bad

DarkOrbit Reloaded is a free to play space-themed MMO available through web browsers where players battle against each other as one of three major future factions. Whilst the game is one of the older browser games on the shelf that paved the way for newer MMOs, it’s not without its charms. So let’s take a look at the Good & Bad of one of Bigpoint’s flagship titles.

Easy to Pick Up - For a casual pick up and play space simulator then DarkOrbit is pretty decent; the simple controls provide a casual element to the game but with enough details and complexity in other areas. Although the game doesn't have a mobile App, players can play it through 3rd party programs on their devices and the mobile platform is ideal for the point and click combat

Decent Graphics - Whilst DarkOrbit is an older title, it did get a graphical upgrade that at least kept the graphics looking reasonable; but even for a browser game it's looking more retro and dated by the day

Fun Team MMO - The solo experience in DarkOrbit isn't much to be desired, but playing with a group of friends or being part of a Clan is a lot more exciting, whether taking on PVE bosses or battling against your rivals in huge Clan v Clan battles

Global Servers - With the inevitability of diminishing server populations, the Global Servers are able to pool together players from larger regions to then make a more active community; unfortunately a lot of people are high level and it's a long journey to catch up to many of them

Regular Events - The developers try to push out new PVP and PVE events every few weeks to keep the community active and give them the chance to earn new items, materials and rewards to improve their ships

Grind Quests - The vast majority of PVE quests are simple grinder quests that instruct you to go to a certain location, kill X number of enemies, then come back, just to send you out and kill X number of another enemy. Added to this every enemy, apart from having different graphics and stats, plays exactly the same

Slow Travel Time - It takes far too long to get from one galaxy gate at one end of a level map to the other just so that you can travel to a new area. Combined with the majority of quests making you go back and forth to the same area it can be a tedious journey

n00b Unfriendly - Want to go exploring? Happy to take forever to get there? Travelling alone? Wait... you're new? Prepare to get one shotted by high level players that will blow your ship to pieces the moment you enter contested open PVP space

Pay To Win Elements - The cash shop has become more extreme over the years trying to entice players to buy powerful upgrades, with the cost creep increasing drastically. DarkOrbit is renowned for selling off an in-game virtual "Zeus Drone" that cost €1000 cash each...

Boring Combat - Whilst the simplicity makes the game easy to pick up and play for new players, it comes at a cost and that is the point and click combat lacks skill or any real strategic thinking and gets very boring 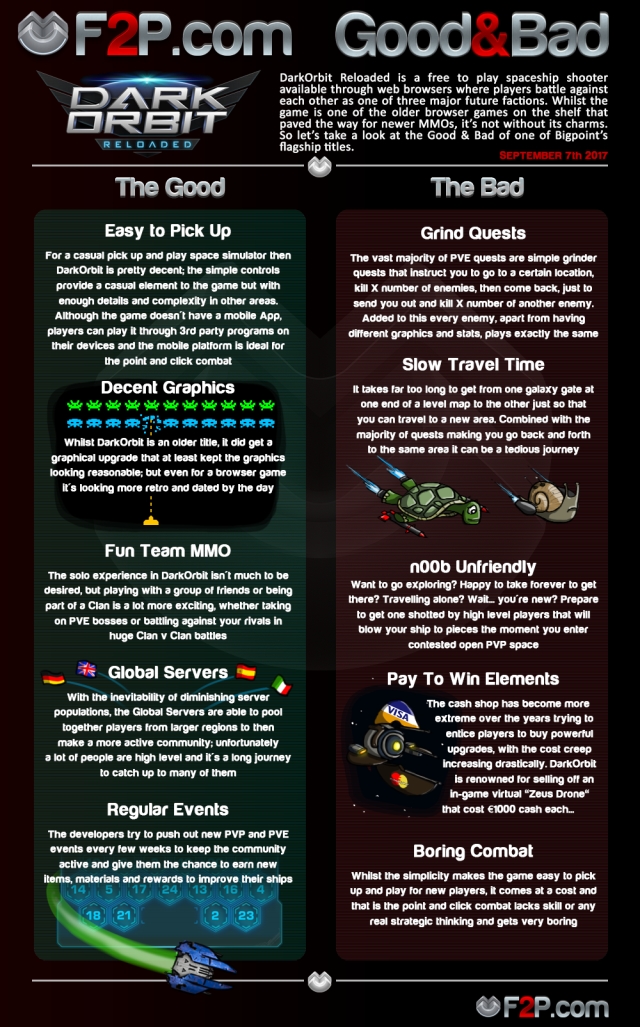