Crossout Celebrates its One-Year Anniversary in the Open Beta, This MMO Combat Vehicle game developed by Targem Games and published by Gaijin Entertainment, Crossout, is officially celebrating the first year in Open Beta.

For this from May 31 since 7th June, all the players who log into Crossout (with a new account or old one) will receive a special mountable fireworks launcher and all the players win multiple battles can earn other exclusives in-game items.

Since Crossout is launch last year, Gaijin has added three new factions, hundreds of parts, mountains of weapons, eight new locations, and 12 new gameplay modes, including the new “Battle Royale” mode. There have been an incredible amount of custom vehicles made, from trikes to gunships, and Crossout has crafted a new vehicle, using only the most popular parts. It has been dubbed, “Blendorama”.

The Blendorama possesses two of the most popular in-game weapons, the ‘MM5-4 Vector’ machine gun and the ‘AC43 Rapier’ automatic cannon. On the battlefield, players have preferred vehicles that possess a combination of speed and maneuverability, and so lightweight cabins that offer plenty of energy for weapons without slowing down their vehicle are very popular. The most popular lightweight cabin has been the ‘Growl’ cabin, used together with wheels as the favorite choice for propulsion. Year two for Crossout will have even more game modes, story missions and tons more parts and weapons to create your dream machine. 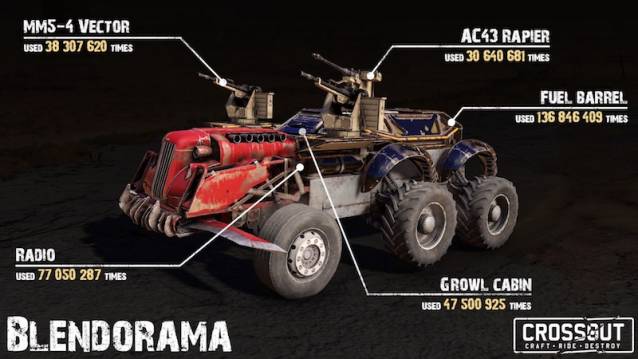 Come here and play Crossout and have all the updates here in F2P.com.