Call of War: The Good & The Bad

F2P Network headtitle: Call of War: The Good and The Bad

Set at the beginning of World War 2, Call of War puts players in command of their own real world nation, tasked with rising to power in a conflict that engulfed the globe, can you reshape history? With strong elements of strategy the game marks the sequel to Bytro labs earlier browser strategy Supremacy 1914, and sits among a popular genre, but which is truly The Great War game?

Call of War: The Good and The Bad

Dozens of Playable Nations - Players control one of several real world countries (or some fictional countries in the 50 player "Pacific Conquest" scenario game mode) situated in their real world location, with each country having its own strategy to lead them to victory

Daily Newspaper - The newspaper reports all major events that have happened each day, from attacks, conquests, defeats, declarations of war and alliances; players can even write their own articles for other players to see with included uploaded images

Real Diplomacy - Whether opening trade, sharing intel and maps, or simply having a mutual "non-aggression pact", all the relationships and benefits gained between players is done with real world negotiating and trying to convince some players to help you and other players to not attack you!

Day to Day Progression -The progression system works off real time and has a day to day advancement system, where certain buildings and units are only unlocked a set number of days after the game has begun; this means players can’t focus on heading straight to the end game units and provides more balance

Alliances - Whilst the game can be played solo there is something more rewarding about playing cooperatively with other players in an Alliance and looking out for each other, having a shared goal, the same enemies and working towards victory together

Slow Progression - Whilst entirely intentional and structured, and part of the gameplay experience, it takes hours to get even the smallest tasks done and so it means that players aren't able to just keep playing the game and are forced to keep popping back

Gold Progression - Players can, and do, spend money to acquire premium currency that allows them to rush construction of buildings, training units, and fill in resources where they are missing; whilst it is expensive and doesn't guarantee victory it has become a staple to competitive play

Limited Options - Whilst the progression system is decent, the problem is that there just aren't enough buildings and units to add much customization or individual strategy; ultimately all players will aim towards the same end units and try to create them in force

Unbalanced Nations - There are some nations that are far superior than others, demonstrated by the same nations always being picked first when in an open game, some games are known for their higher "difficulty"

Dated - In comparison to other strategy titles the graphics and gameplay are extremely basic and there's a lot of competition out there that is superior to the title, including those from the same developer 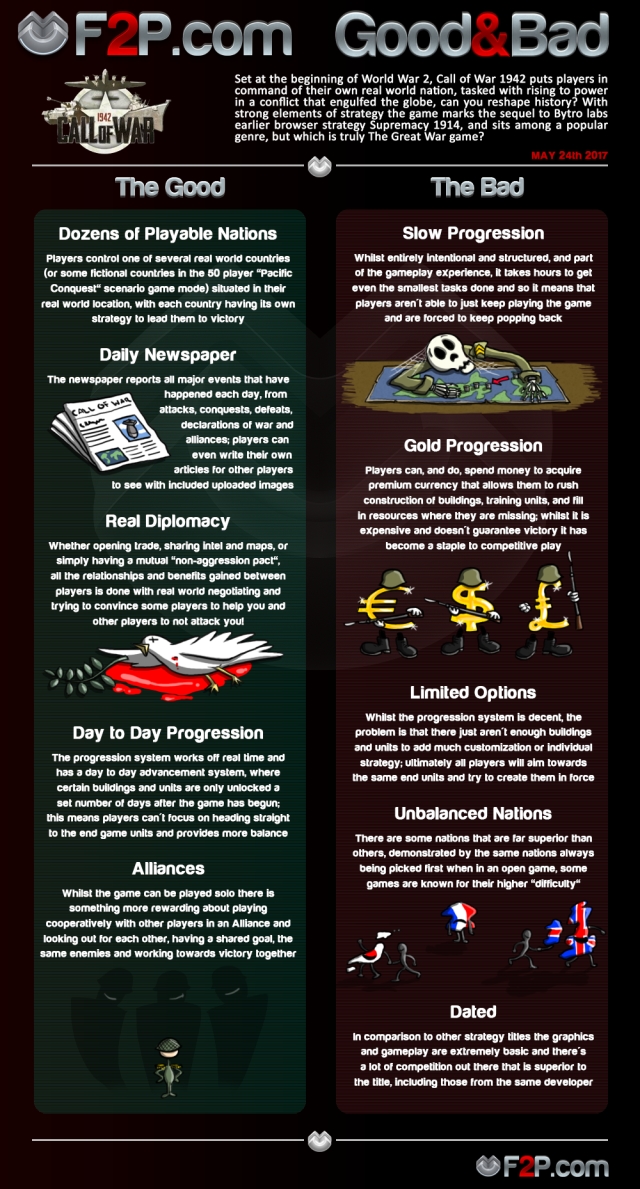 Call of War: The Good and The Bad - Call of War Free to Play Multiplatform MMORTS

Call of War: The Good and The Bad here in F2P.com