Bytro Labs GmbH publisher of Call of War World War II collaboration with F2P.com, to bring you this special Giveaway for all the new users for Call of War plus a nice event. 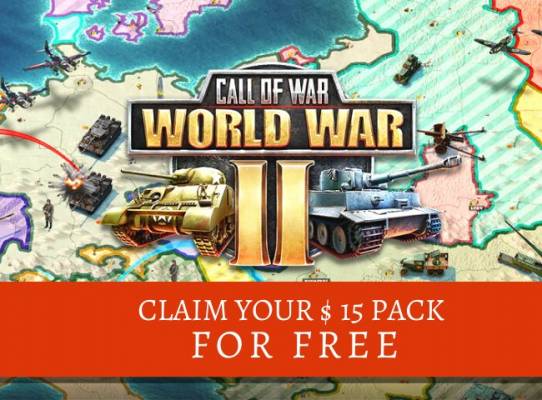 25.000 Gold in-game currency and one month of high Command premium account for every newly registered player for Call of War.

It will be available starting today until April 12th end of the day.

Step 2. Register to the game use this link Call of War for PC, Android devices Call of War or iOS here Call of War only the new users who use these links will win the Starter Pack for 15 Euros / dollars.

Step 3. To redeem your 15 euro starter pack, create an account and pass the tutorial. Once you do, you will have 25,000 gold coins and one month of High Command premium account on your profile on Call of War.

Event for all the users New ones and actual players for Call of War.

The time has come for another speed round event! Cancel all your plans and prepare for some short nights and long fights during the next 14 days. If no player or coalition has achieved a regular victory by that time, the player with the most victory points is declared winner. The end time is displayed in the game information within the newspaper and as a countdown on the right side of the screen.

Settings for this speed round event on Call of War:

If you want to participate in this event simply go to the game list: Within the sign-up period new event rounds will be created on-demand and shown on top of the list of new games. As soon as the map has started you will receive a notification to your inbox.

Call of War, also known as 1942: Call of War, is a free-to-play browser-based multiplayer strategy game developed by Bytro Labs where players can command forces and fight in battles of World War II. In Call of War it is the year 1942 and the world is full of conflict. The most powerful nations in the world are warring with each other and need a leader, which is where you come in, you can play on PC, iOS, Android, ...