Good morning Bytro Labs and F2P.com like to give to our users these great event and promo for Call of War for all the platform’s IOS, Android and browser. 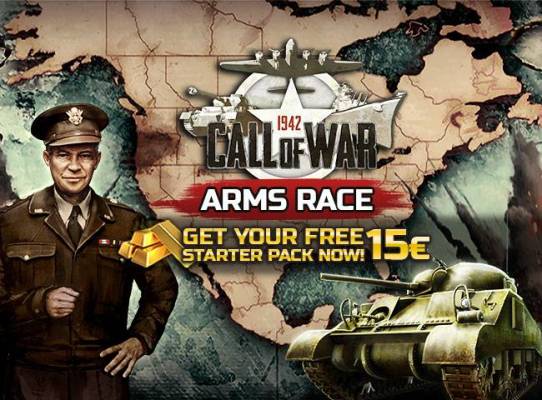 Arms Race Event these is the information for the event from Bytro Labs for this weekend 9th November since 11th November;

It is time for another challenge. However, you won't be alone in this upcoming fight. 150 strong troops will unite and fight for you in this week’s event Arms Race.

At the start of the game, five light tanks, four regular tanks, three artillery units, two mechanized infantry units, two anti-tank units, a commando unit and an air defense unit will be stationed in each urban province for each player to complete the already complete protecting converted buildings, ready to take orders. In addition, three additional infantry units can be found in all non-urban provinces."

Arms Race Event for Call of War and win these assets;

Call of War or CoW, is a F2P MMO game, Call of War puts players in the command seat as they are leaders of their country at the beginning of WW2, able to rewrite history as they choose who they shall fight and who they shall become allies of in exciting PVP real-time combat.