More details about the achievement reward system can be found in the game Call of War look for the news post from last week.

New Updates on Call of War

● We implemented a button in the top middle of the profile which allows players to switch between human and AI for killed and lost unit statistics.

● Clicking near the score and ranking in the profile will open the ranking of that player, this can also be used in every player's own profile.

● The arrow to show individual unit statistics will now open the information for all units at the same time, which allows the players to get a better overview and compare their statics more easily.

● Global popularity is now again shown in the in-game profile for Elite-AI rounds.

● A new achievement reward system has been implemented, enabling players to collect Gold rewards for completing any of the over 40 achievements they did not complete so far.

● Rewards can not only be collected for achievement levels gained after the update, but also for any that have been completed since April 1.

● The full details on which achievements have been changed and how much gold the players will be able to collect can be found in this Google Sheet.

● Players are now able to find the map-specific winning reward for their game round in the newspaper.

● In the research menu as well as the production menu players will now find Anti Air, Artillery and Anti Tank units in the Infantry tab. Mechanized Infantry can be found in the Armor tab.

These units now count towards their new category for certain achievements.

● The small icon next to each unit on the map will always display their current armor class.

● Users that are invited to an alliance should now be able to see a message instead of the default alliance text.

● You can now also compare your profile with other players. 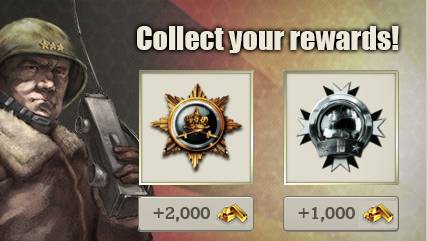