Bytro Labs GmbH publisher of Call of War World War II collaboration with F2P.com, to bring you this special Giveaway for all the new users for Call of War plus a nice event for the 5th Anniversary for Call of War, start today at 10am CTS and end the 30th of April 2020.

10.000 Gold in-game currency and three month of high Command premium account for every newly registered player for Call of War.


Step 2. Register to the game use this link Call of War for PC, Android devices Call of War or iOS here Call of War only the new users who use these links will win the Starter Pack for 15 Euros / dollars.

Step 3. To redeem your 20 euro starter pack, create an account and pass the tutorial. Once you do, you will have 10,000 gold coins and three month of High Command premium account on your profile on Call of War. 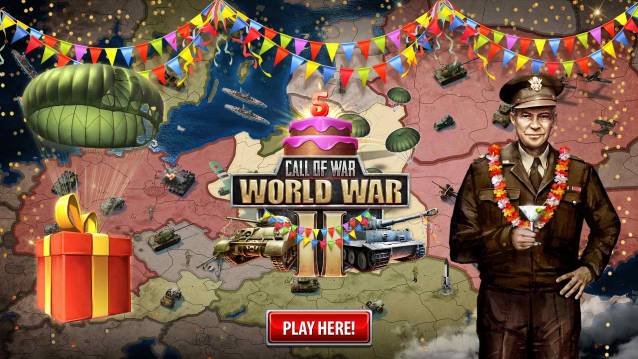 Event for all the users New ones and actual players for Call of War WWII for the 5th Anniversary here on F2P.com

Time flies, as they say! Just like the fighters and bombers these days. The Germans are rearming, the Russians are on the move and the Royal Navy is on high alert! It looks like we are only hours away until war breaks out in Europe once again.

Mobilize your troops and prepare yourself for whatever enemy you may face! “Rush for Europe” is a special event map which runs on breathtaking 6 times the speed of normal game rounds! Even the tiniest decision could have severe consequences at this pace. Experience the war for Europe in a way you have never seen it before!

If you want to participate in this event simply go to the game list: Within the sign-up period ( new event rounds will be created on demand and shown on top of the list of new games here Call of War World War II

We hope you enjoy the event and which you best of luck on the battlefield!