Aura Kingdom: The Good & The Bad

Aura Kingdom: The Good & The Bad

Aura Kingdom is a free to play anime MMORPG where players adventure across a fantasy realm in a PVE focused quest based experience. The game offers high level of class customization, PVP, PVE and a variety of features; but how well are those features implemented? Let’s find out in our next Good & Bad...

Fantastic Artwork - The graphics are pretty impressive, extremely vivid and perfectly enhance the anime style; from the characters, animations and lush environments it does make exploring the world interesting

14 Playable Classes - There are 14 classes to choose from, which for a game that was released three years ago is pretty good going; ranging from the classic melee, magic and ranged combatants there is something for every play style

Envoy's Path - The game's talent tree system allows for a much more fluid method of improving and tweaking your characters, with no fixed path players can branch out across the talent grid as they prefer, with each class having their own path grid

Flying/Gliding - Players are able to fly and glide around the area at speed, helping them maneuver around the nearby environment quickly and in style!

Ability Customization - There is a ton of ways to customize your character's skills, stats, Masteries, Eidolons, weapons, Envoy Path, allowing for some unique builds that differentiate players from each other

Auto Pathing - The auto-pathing system is very well done, allowing you to find NPCs, quest locations and even auto-path you across regions and loading screens; however it does make exploration redundant and feels like the game plays itself too much at times

Limited Appearance Customization - With only a handful of face options and hairstyles, different coloured hair, eyes and skin tone, there really isn't that much in the way of character customization to make your character look different from everyone else

Boring "Tab" Combat - Combat gets quite tedious which is focused on tab targeting to your next enemy, hitting a button to attack (which automatically brings you within range) and then just cycling through attacks

Scheduled PVP - The PVP Arena is only open up on set days at set times, meaning not only is it a system that you can only occasionally play, but if that schedule falls at a regular time that doesn't fit into your play time then you don't get to experience it at all

Early Multiplayer Dungeons - Players have to make a group in the public Dungeon Group Finder and actively join them, instead of being matched up automatically. The result is long wait times for people making groups (especially at lower levels) and being unable to solo attempt multiplayer dungeons

Questing - Ranging from quests that are extremely unheroic, fighting cute wildlife instead of dangerous beasts, or the masses of dialogue and lack of voice-overs the questing feels like a grind

Invisible Walls - Low amount of effort to fence players off from accessing those inaccessible in the game areas by simply putting huge invisible walls in the way, which is a real immersion breaker 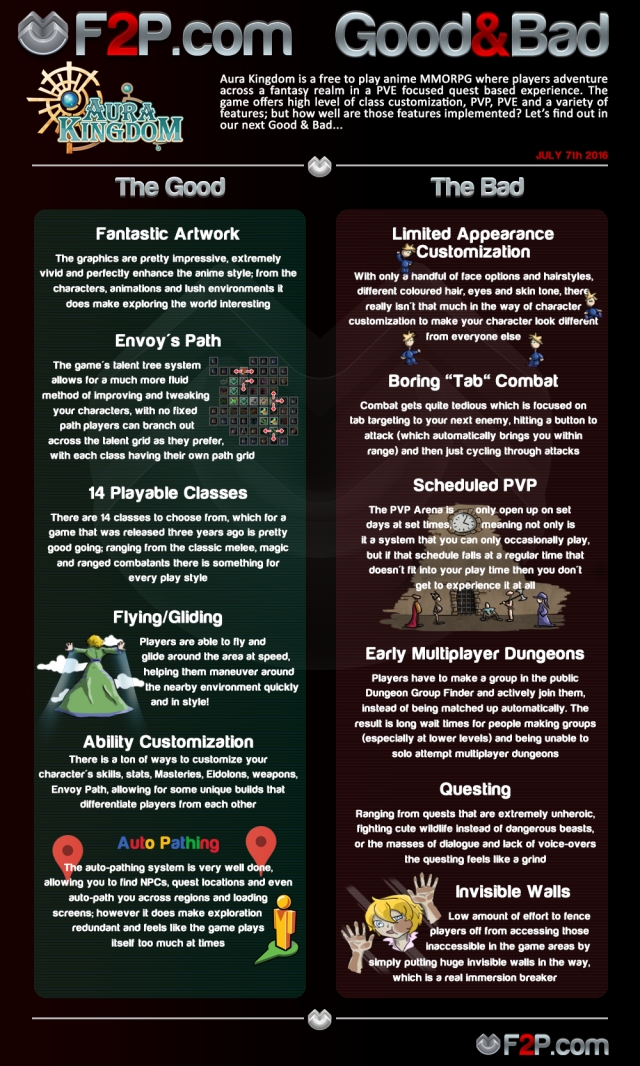