World of Warplanes: The Good & The Bad

World of Warplanes: The Good & The Bad

World of Warplanes is a fast paced aerial team based shooter where players battle across the skies in WW2 themed airplanes and engage in exciting dogfights. With customizable planes, multiple maps and modes, the game brings a new life to the aerial shooter; but after weight up the Good & Bad will this MMO soar into the skies, or be spiraling down into a crash landing? Read on!

Arcade Combat - The combat in the game is very fast and fun, players will be able to perform aerial acrobatics and insane spiraling stunts as they try to jockey for position in the skies and outmaneuver their opponent in excising dogfights.

7 Available Nations - The game has a wide selection of planes from some of the main forces in WW2, players will be able to fly some of the most iconic planes of the war designed around the strengths and weaknesses of those actual vehicles.

Crew - Players can acquire different Pilot and Rear Gunner AI crew, which can be trained in new skills that give the player different options in the game. Crew can be injured during battle which reduces the effectiveness of their personal skills.

Customization - Players can customize their own planes to best suit their strategy equipping their vehicles with various modifications from a large list, some of which are specific to certain nations, as well one time use consumables such as heals, boosts and ammo.

Supremacy Victory - Other than annihilating all the enemy team members, when a team has more active planes or surviving ground units then they have "Supremacy" and they start to fill up a gauge, which continues to fill until the other team has Supremacy and their gauge fills. The first team to fill their gauge to 100% is the winner.

Standard Wargaming Leveling System - The game forces players to purchase, level up and spend in game currency on low end planes and work their way through a tech tree in order to access later game planes; the result being buying, playing in and leveling up planes that you might not even want.

Lack of Realism - The game prioritises fun and casual accessibility over realism, which is a matter of personal taste, however due to this some of the mechanics and movement options it doesn't feel as believable when compared to other flight/dogfight shooters.

Plane Health - In some ways following on from the Arcade vs Realism this brings with it a planes overall health and hitpoints, where a successful attack deals damage to the plane overall as opposed to individual plane components and parts.

Weak Graphics - Even at release the graphics weren't the most impressive, but two years on and the game is starting to really fall behind when it comes to graphical fidelity, with both terrain and plane models, especially when compared to other vehicle based MMOs.

Too Many Bots - The population of the game seems to be on a nose dive into the ground, the result is that so many games are now filled with AI Bots that for the most part are inept, and the only real threat is when they group up and swarm the same target

So that's what we feel is the best and the worst of World of Warplanes, let us know in the comments below if you think there's anything we've left out! 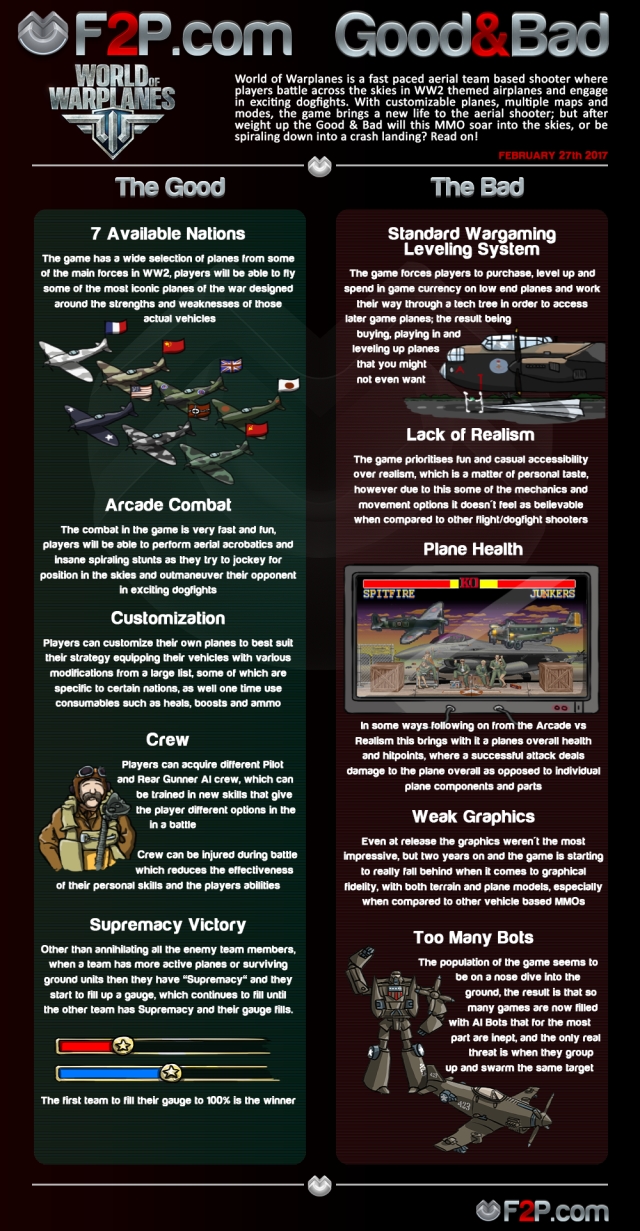