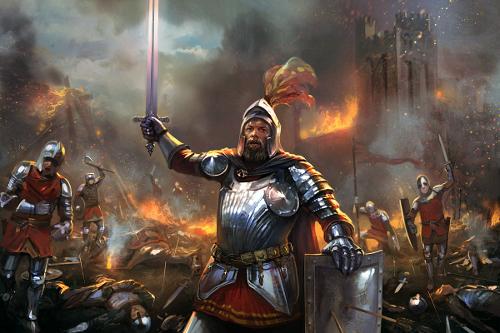 For 15 years, Tribal Wars has been about all or nothing. For this year’s anniversary, the new endgame “The Great Siege” once again provides new challenges for the online strategy classic. In the center of the map a mighty city appears. Tribes can now try to conquer and also hold the city in a large siege, in order toprove who is the most worthy. The Great Siege: New Endgame in Tribal Wars Starts Worldwide.

While the city can vary in size from world to world, it will always be divided into four districts: the Town Square, the Financial Borough, the Craft Borough, and the Harbour. These districts function mainly like normal villages, but with some distinguishing features, such as a defensive malus that makes defending difficult. By holding these districts, players gain influence points. These are distributed daily, at a different time for each district. In order to gain influence points, a tribe must therefore hold the district at exactly those times. Planning with foresight is essential, as is weighing up whether a last-minute attack on the city make sense or not. To win a world, a tribe must reach the points of influence set for the victory condition. Watch our video which explains the new endgame "The Great Siege":

Thomas Raimbault, Product Manager Tribal Wars on the new endgame: “With the Great Siege we celebrate 15 years of ‘Tribal Wars’. The game is an absolute online classic that we continue to develop every day to offer our community new and exciting content.”

The new end game is online since the end of August in Sweden, Norway, Switzerland, the UK and the USA. Germany, France, Italy and Spain followed in September. By the end of September, the new endgame will be live in all 30 languages of Tribal Wars.

“Tribal Wars” is available at Tribal Wars in the browser and on mobile devices.

Tribal Wars was released in 2003 and was one of the first browser strategy games ever. In more than 15 years, Tribal Wars has been released in 30 different languages worldwide. Launched as a browser-only game, it is now cross-platform with apps for iOS and Android devices. Tribal Wars takes place in the early Middle Ages. Each player starts as the chief of a small village and fights for fame and glory. In addition to the right tactics and diplomacy, the key to success is the skillful expansion of your own troops.