Summoner’s Legion, the free to play browser Card Collecting Game, is up for our F2Peer Review, a very different take on the card games that many players might be used to (Hearthstone, Hex, Magic The Gathering, etc.) and incorporated classic card collecting, deck building but on a more tactical three lane map where positioning of cards/units plays a vital part in trying to overcome the enemy opponent. We put the game to our featured community members to gather their thoughts and let us know what their verdict is on the game. 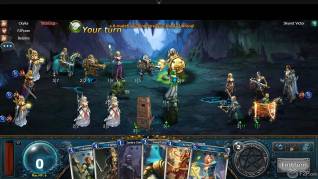 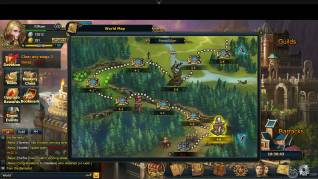 JimSlam:
I really like TCGs, particularly Hearthstone, so playing Summoner’s Legion was extremely fun for me as even though the gameplay is completely different from your traditional TCG it is still really fun, though quite easy for quite a few levels once you’ve learned what the cards do. Building up strategies with your available deck and getting into the crafting side to improve cards is always fun and seeing if you can implement them through the course of the fight. My experience with Hearthstone definitely helped here and I managed to build a fairly decent deck with just the cards I was earning through gameplay and buying with gold.

The biggest issue that I found was that the higher you get in level the more drastic the imbalances are, certain cards such as really dominate/ruin an otherwise fun and strategic game and the Mage and Ranger class seem to be a little overpowered. Combined with being matched up against players that are always way higher in level in the Arena it just got very frustrating to keep playing.

IAMJohn:
Very very easy to just start playing, the progression through the early AI modes was at a good pace that helped me learn what I needed to do, though it was pretty straightforward even if I’m not familiar with these lane/RPG/stategy style card games. At first I thought it might just be a poor TCG, but was actually surprised at how enjoyable I found it. Whilst I don’t think I’ll have the time to keep playing the game I’d say it’s definitely worth giving a look even if you’re not familiar with this style of game (honestly it’s quite hard to call it a straight TCG/CCG) it reminds me of Pox Nora or Fire Emblem, one of those kind of tactical games.

Kittypride:
The game is surprisingly involved for a Card Collecting Game, with lots of mechanics and features involved (thankfully they’re implemented over time as you level up so you get the chance to learn new things as you go). I found the game pretty fun, though I stuck more to playing against the AI and dungeon co-op mode, which was surprisingly fun, however as long as you are with players who are somewhat competent it did feel like we were constantly walking over the AI; going up against other players was the real challenge though one that I have to say I didn’t always do too well with so stuck with the story. Earning new cards and playing around with decks is a real time sink, I spent a lot of time pondering over “builds” but I’m not that experienced with CCGs so a big part of my strategy was luck!

Ballgon:
R2 Games… do I need to say anything else? In all likelihood this is the eighth version of this game that has been reskinned, renamed, but has the same fundamental mechanics as a bunch of other games (at least that’s what they normally do). The AI just makes the game boring because it’s so dumb and ridiculously easy to defeat, but then your only other alternative is the terrible matchmaking in the Arena that puts you up against players ten levels higher than you that have probably bought some of the best (read: completely overpowered and imbalanced) cards. Ultimately the only valid tactic in the game is “Rushing” by spamming fast creatures, damage pushers and direct spells, which means everyone is doing it.. so it gets extremely samey. Save your time and money, there’s plenty of other far better Card Games out there, before R2 Games can try and dupe you out of your cash.

Tenebrae:
Not my style of game, nothing to do with this particular title, I’m just not a big TCG/CCG lover and this one felt a lot more involved than others out there with the extensive features (which I guess should be a positive). For me I was hoping for something a little more casual but with all the different abilities, extensive number of cards, deck customization and card upgrading it was a little full on for something I’d probably only want to play as some quick pick up and play fun. I didn’t really have the patience to work on a good deck, just using what the game gave me, and whilst I can say that it does seem well put together, great artwork and at least an attempt at a story, ultimately I just couldn’t get that into it.

Elijah:
There’s a lot that is really good with Summoner’s Legion, a lot that I enjoyed in my time playing it; the combat system itself is great and extremely strategic, constantly having to shift your tactics based on what you and your opponent have drawn or just keeping your fingers crossed that your much needed card comes out. As this isn’t a game I’ll consistently play I didn’t feel the desire to put any cash down, but it felt that the further I got into the game the more it felt like being a few user was hindering me. Whilst the combat starts out really fun it does get a little tedious as you see the same cards coming out a lot and whilst there’s a lot of diversity in the cards you use, some of them are so poor that it greatly limits the sensible choices.

Your_Nemesis:
As a huge TCG/CCG fan I was interested in the combination of tactical combat and CCG elements that Summoner’s Legion had incorporated into the game, it really does create a different experience which I generally really enjoyed. I enjoyed the card upgrading, it was an interesting feature to let you keep your original cards and improve their stats yet retaining the same cost to play. There’s plenty of features focusing on PVE and PVP, even a co-op mode where you fight with other players against tougher enemies, presumably trying to introduce amore RPG flavour to their game, which was pretty cool. 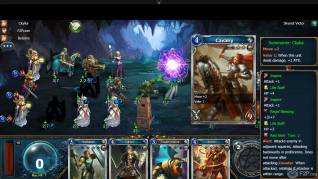 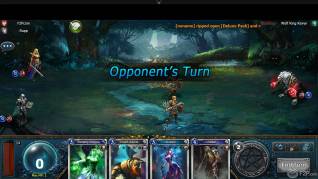 So that’s what our players think, but what about you? Do you play Summoner’s Legion? If not then why not? What do you like or hate about it, and what do you think about our players’ opinions? Let us know in the comments!