Games: the final frontier. These are the articles of the starship F2P.com. Its continuing mission: to explore strange new MMOs, to seek out new story-arcs and new features, to boldly go where no man has gone before. Star Trek Online embodies the TV and Movie series where players can be the captain of their own ship, read on to find out what we love and dislike about it!

Character Appearance - Players have some powerful character appearance customization tools, with a whole host of sliders on top of baseline looks of the most popular species from the series, to the ability to make your own new and unique alien races as well as those that the game might not cover

Land and Ship - Players take on the role of a Captain of their own ship and crew; able to fly their ship and experience space-based gameplay, they can also head to planets on expeditions and experience third person shooter land based content

Expansions/Episodes - The game does a good job at bringing out expansions and new story content to keep the universe alive, adding new quests, locations and features for new and older players. In particular...

Agents of Yesterday - This expansion covers time travel in a way that allows players to go back to a 23rd Century Cpt Kirk Era with graphics, techs and uniforms that mimic the The Original Series in all its retro glory

Highly Customizable -Players are able to customize their character, crew and ships in a variety of ways to best suit their own playstyle and going beyond simple aesthetics

The Foundry - Create your very own instanced based space and land missions where creators are able to place down thousands of different assets that range from terrain features, decoration, items, NPCs, quest text and enemies

Combat Focused Content - Diplomacy in the game is just a term that is banded around every so often in a mission text, the reality is that the vast majority of missions end up in some sort of fire fight that generally goes against a lot of the Federations key principles

Player Notification Spam - The game constantly notifies the world when players unlock certain items, mounts and achievements, not only is it a long list constantly spamming, but the fact is that NO ONE CARES if some stranger acquired a cool ship...

DPS Builds Dominate - The weakness of non-DPS focused classes/ships is a big issue, particularly in late game PVP, and whilst Engineering and Science ships are useful they are greatly underpowered in comparison to the Tactical career path

Weak Ground Combat - Whilst the space combat is pretty well designed and has a lot more tactical strategy to it, Ground Combat is extremely weak, a little clunky and gets a little boring after a while

The Foundry - We have a love-hate relationship with the Foundry, for everything it can do and its potential, it has some frustrating restrictions: missing NPC types, item limits, no branching quests, and much more... worst of all is that it is an older version of the Foundry to what's available in the Neverwinter MMO and so it constantly feels like using a system that we know isn't living up to its full potential

So that's what we think is Good & Bad about Star Trek Online, let us know what you think about the article or the game in the comments below. 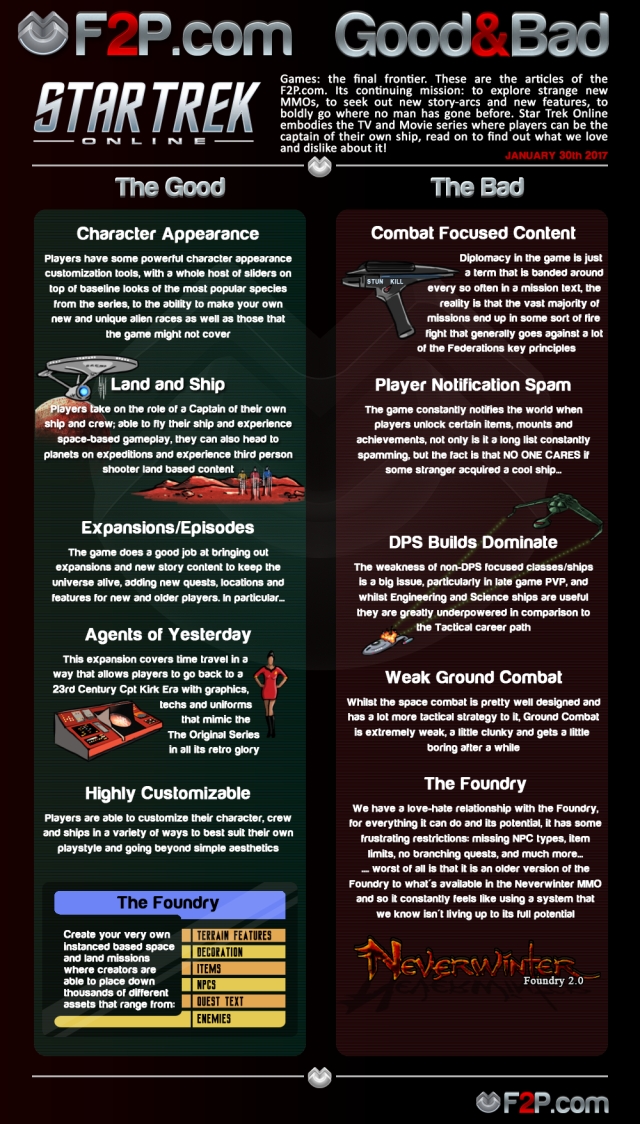