Eutechnyx is subjecting its free-to-play online racing game Auto Club Revolution to a massive update to offer more flexibility and a deeper player experience. The Progression Update includes a myriad of improvements and new systems which will engage with racers on a new level.

In a Q&A session, Christoph Vietzke, Executive Producer on Auto Club Revolution explained the details of the update:

Q: What is the Progression Update?

A: ACR’s Progression Update is a more robust and balanced version of Auto Club Revolution. From looking at the free-to-play market and taking on board player feedback, we have implemented new systems to improve performance and stability into the racing environment. New progression systems have been introduced to enhance the player experience, making ACR a more engaging and competitive game.

Q: What does it mean to be a ‘Progression’ game?

A: Previously a player could purchase any car or upgrade at anytime, as long as they had the necessary credits, or ebucks. With the new progression system a player must unlock cars and upgrades as they increase their rank. With the Progression Update, ACR is encouraging the player to progress through the game car by car making Auto Club Revolution into a driver journey.

Q: What are the benefits of the new system?

A: Having cars unlocked by levelling up adds a more honest and free approach into the ACR experience. EXP points are earned by players participating and completing races, the more a player races, the more EXP they will earn. Earn enough EXP and a player ranks up, giving access to new cars and upgrades that will always be available for Credit purchases. As a player climbs the ranks they will be rewarded with access to better cars with higher levels of performance. Higher performance cars will also earn a player more EXP and Credits per race, increasing the return of investment the player has made to unlock and own the car. 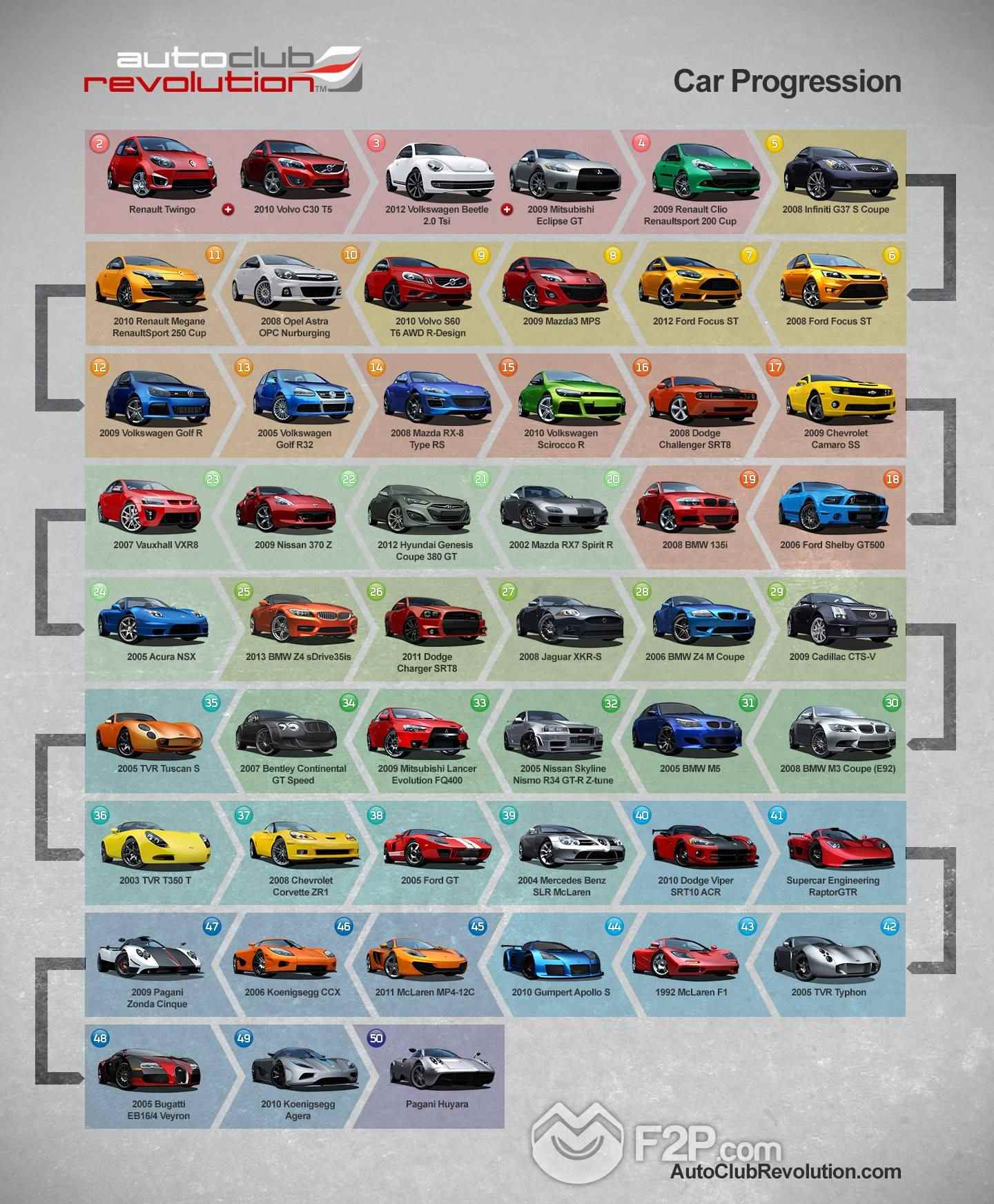 Q: What happens to a current players ranking, how does that cross over to the new system?

A: A player’s rank will be transferred to the new system so they can continue on their progression paths.

Q: How are damage and repair models being implemented into ACR?

A: New damage mechanics have been introduced in the Progression Update. This is something that the community has been asking for, for a long time. We now feel that the game has the right balance to fully integrate it into the game. Damage will only be active in competitive races (A.I. and multiplayer) and will not affect single player practice races. During a race, a car can lose up to approximately 10% of its performance through damage. A car will never be damaged beyond a point at which the user could not complete the race. After the race a damaged car will be unavailable to race again until repairs have been made. Repairs cost a small amount of Credits, corresponding to the amount of damage a car has taken.
Unlike other games repairs happen instantly meaning a player can race their favourite cars again quickly. The damage and repair system adds another dimension to the car racing experience Auto Club Revolution aims to be.

Q: Are all cars available for purchase with Credits?

A: 50+ cars (that’s almost 90%) are now available to purchase with Credits, but they have to be unlocked in the showroom through ranking up. This includes five brand new cars that will be available for players to unlock (details on which cars these are will be revealed soon!). The remaining cars are available as Premium cars only, which are purchased via E-bucks. To be absolutely clear the premium cars allow player’s access to higher level cars direct, but these cars will never be the strongest cars in the game.
The most powerful cars in the game still have to be unlocked through proper competition; completing races and participating in events. This results in the game being fair to players that are willing to compete in and complete the racer journey in order to race the top cars of the world.

Q: What are Premium cars?

A: Premium cars are a range of special pre-upgraded cars that will give the player an accelerated rate of rewards, earning them additional EXP and Credits when used in a race. They cover a range of performances, but are not the best cars in the game. The benefit of Premium cars is that they will help to accelerate experience payouts and help a player achieve ranks quicker.

Q: What happens to cars which current players have purchased?

A: Veteran players, or anyone who played the game before the implementation of the Progression Update will still retain the cars they own, these will be exempt from the progression system. This will reward our existing community with a bonus for being part of our community so far.

Q: How is the upgrade system going to work?

A: Rather than being able to attribute a large number of upgrades to a car we are making players take a more tactical approach by giving the player a choice of applying up to three upgrades. Each car has 14 different upgrades which can be applied to increase various elements of performance, but players can only use three of these at a time. Players can customise their load outs for specific tracks, offering a more tailored experience. There will also be two additional Premium slots available to purchase allowing for further customisations. Upgrades will count for approximately 15% of overall car performance, so it is down to the player to pick their upgrades carefully to suit their driving style and the tracks they are racing.

Q: How will rebalancing of car upgrades affect players?

A: Stock cars (cars with no upgrades) have been re-valued to reflect their real-life counterparts more accurately; particularly, the tyre grip of the stock cars has been improved resulting in a quality driving experience for each car instead of only upgraded cars. All the other upgrades have been made to fit specific situations.