In Planetside 2 there is an exciting feature known as the Alerts system, dynamic server-controlled events that gives a huge announcement to all players in the game at that moment and directs them to a single objective leading to awesome massive battles that rewards all players online based on their factions performance and players in the area generate 30% extra XP. Alerts are really exciting moments in the game, but they are unpredictable when they will begin and they only last for 2 hours meaning players can easily miss that window of opportunity to make the most of the action and the huge XP boosts.

Well players will be excited to hear about a new app available in the Apple Store and Google Play that was released this week that will ensure they never miss out on another Alert in the game. Available for both the PlayStation 4 and PC versions the conveniently named “PS2 Alerts App for PlanetSide 2” app allows players to keep up to date with what’s going on in the servers they play on, with a full list players can subscribe to one of more servers to be instantly informed when an Alert has begun and how long it has been going on for. 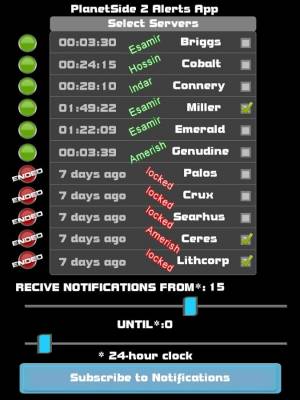 The Alert notification will reach your phone as a text message through the phones default built in system, however, so that you aren’t being disturbed at all hours or inconvenient times, users are able to set the start and end time that they wish their notifications to come through and just leave the app running in the background. Alternatively if you don’t want any notifications coming through your phone users don’t have to use the subscribe feature and by opening the app players will see an overview of the status on all the games servers.

Reaping that sweet sweet XP has never been so easy, so tool up soldier and make sure you’re at the ready to do your part for your nation!