Webzen has just announced that the open beta for its so awaited MU Rebirth is going to start today and every player with an active WEBZEN account will be able to access the game. This title is based on the original game but will offer a way more PvP-Centric gameplay style, with a seasonal reset system that will make competitive players happy. 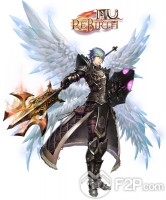 The most important feature in the game is PvP and everything will be focused around it, with systems such as faster levelling, progression system that continues after level 400 and more.

There will also be seasonal competition with valuable rewards and smaller tournaments.

Very soon we'll publish a profile of this new title, so stay tuned.