Recently we had the opportunity to participate in the beta of Wizardry Online, the new hardcore MMORPG developed by Gamepot, and that is based on the Wizardry saga. And of course we bring you a full report about the features of the game. 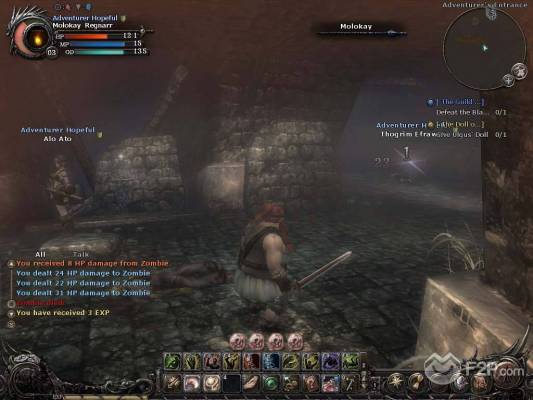 Upon entering the game we have seen a cinematic scene where a group of adventurers confronts a monster. After thinking "it's the typical video where the heroes defeat the monster", we saw how the monster dismembered the group of heroes (Yes, literally dissecting the heroes), and a survivor fled from the dungeon desperately, to die crushed by the foot of a huge monster...

The game is a hardcore MMORPG which focuses on exploring dungeons, defeating monsters, and where you can die permanently. After the trailer, we entered into the character creation screen. 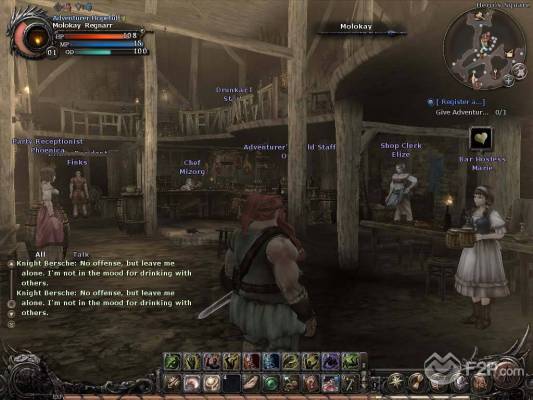 Once there, we started to look at the different races to choose from: Human, Elf, Porkul (a kind of small Humanoids), Dwarf and Gnome (this race differs from what we are used because it is a short girl with horns). The game has 4 classes, Warrior, thief, Mage and priest. We chose to be a Dwarf Warrior, and we saw that the customization parameters are somewhat limited, but you can customize your character decently. The game has some details that we liked, for example we can choose our alignment, and we have a random number from points to assign to our character attributes, in the purest style of the classic RPGs. After assigning the points and deciding the last details of our mighty Dwarf Warrior, we entered into the game. Upon entering we realized that the game reminds us the classic Japanese RPG for its aesthetic, all narrated by a text which you have to move forward by clicks. We entered into the game in a rather unusual way, being massacred and being saved by a mysterious and powerful Warrior.

After that we arrived to a city with a strong anime appearance. The first thing we saw in our interface are the skills bar, the possibility to sheathe or unsheathe you weapon, in order to obtain different skills (e.g. with an unsheathed weapon you can jump backwards to dodge attacks and with a sheathed weapon you can run), and 3 bars, one of HP, one of MP and one of OD (energy which can be used when you run, jump or block attacks). It counts with typical stuff of any other game in the RPG genre as a skill tree, an inventory and the possibility to be able to equip yourself with different pieces of equipment. 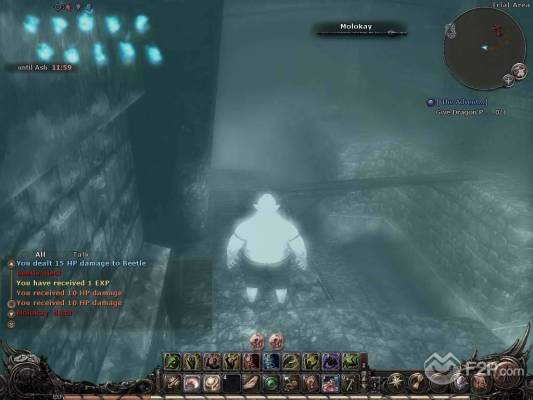 After learning to move our character, we decided to start with the tutorial that the game offered us (which can be skipped if you want to), where a NPC presents us the different game shops. We found from the typical Inn, a blacksmith to trainers and recruiters. After completing some tedious missions to pick up certain NPC items, we were brought to our first dungeon, to get the title of adventurer and with which we can join the Adventurers Guild.

The Dungeon has a very gloomy appearance, and after two steps a NPC taught us one of the most important mechanics of the game: death and resurrection. To do that we died but that served to look how this system works. When you die you become a ghost and you have to get back to an angel-shaped statue in a certain time; once you've arrived you have to overcome a "trial" which is reflected in a balance that shows you your chances of returning to life, which can be increased by sacrificing items that you have in your inventory or with certain special objects. If you succeed resurrecting, your character comes back to life with a small negative effect, but if you fail, your character dies permanently. You have read correctly, your character can die permanently, a point of no return.

Back to life, we explored the Dungeon and we faced a few monsters, realizing the importance of dodge or block attacks. We move forward a little more and we found some traps that we dodged cleverly. After this we found an interesting chest, and we tried to force it. The game showed us our possibilities and options and told us that it was possible that the chest had a trap. In any case, we forced the chest. Big mistake. We activated a trap of poisonous smoke that killed us in few seconds. The worst thing was when we returned to where the chest was, we found that forcing it broke the items inside and the chest had only garbage... A very interesting detail. Then we completed a couple of puzzles and we recovered the item that the mission has commanded us to achieve. 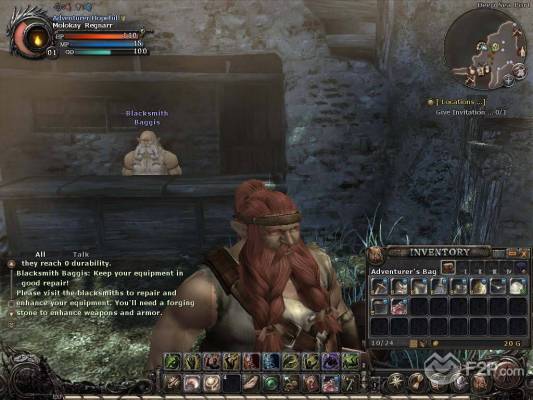 Once finished the tutorial, we moved more freely through the city, and thus we discovered a few more surprises. The first is that you can hit other players and NPC's with your weapons, harming and killing them. If you do it within the city guards will punish you, and if you insist killing players, your eyes will turn red and you will be the target of the city guards and other players. Another interesting thing: when you kill players you can steal some of their items. When this happens in the city you have some protection, but outside the city, in the dungeons, you have to walk with thousand eyes if you don't want to die and be plundered. Also you can change your class completing certain missions.

After buying a couple of pieces of equipment, we decided to delve into our first Dungeon, because the main mission of the game took us there. So we went to the gate of the city, and chose to join an instance for the first dungeon, the Caligrase Sewers. Once inside we found a couple of missions and some players fighting against the monsters. The first thing we realized is the enemies can kill you easily and that the traps (as we had already seen) were lethal. After completing a pair of missions of the first level, we decided to move to the next level.

At each level, enemies are harder and tougher, and puzzles and traps are more abundant. That is why we decided to group with a couple of players who passed through there. The game rewards going in group, regenerating your energy faster and getting more experience. With our small group we were advancing, defeating all the enemies we faced and going with extreme care by passing through places where traps could be. After a while we found a monster which looked like a boss and a pair of adventurers fighting against him, so we joined the battle, and we managed to defeat the boss, and got our first dropped item. Then we explored a couple of levels more, completing several missions, and we can say that the game left us a positive aftertaste. 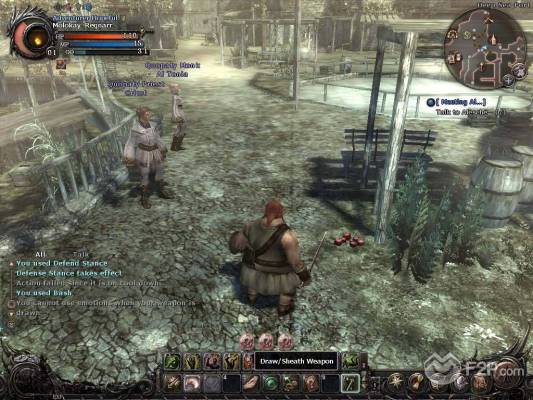 GRAPHICS AND SOUND on Wizardry Online

The graphics of the game are somewhat poor, despite being functional, the truth is that the game seems old; on the other hand the classic RPG aspect is very well achieved. The overall anime aesthetics are very well achieved, either in the characters and the environment with colorful graphics in the city and in the dungeons with grim and dark graphics (full of traps). 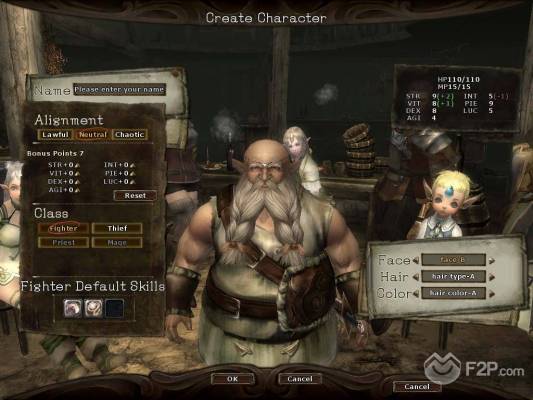 THE ONLINE STORE on Wizardry Online

In the game store we can find a lot of items, ranging from weapons and armor to potions and aesthetic objects. There are also several bonus that increase experience and gold obtained, among others. All of these special objects can be obtained by paying a small amount of real money. 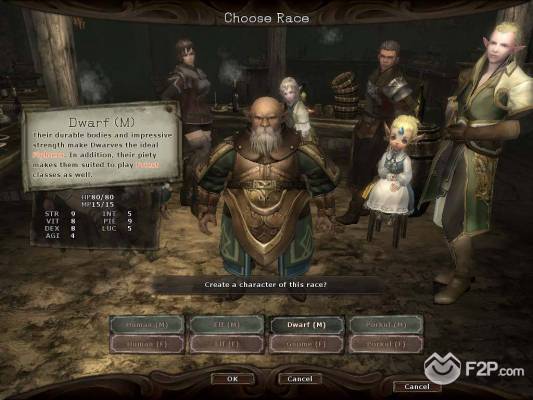 Wizardry Online is a quite entertaining game, perfect for those who are fans of the classic RPG and the anime aesthetic. The game is pretty hardcore with things that make them unique as permadeath, or the difficulty that the game has. But it looks something weighed down old graphics and controls that at times are annoying. In conclusion if you like this kind of games where any breath can be the last, we definitely think, you should give it a try!