Same strategy based gameplay from the original series, exceptional graphics, high levels of customization for units

Extremely reliant on players being good at the game, hard to have a unified strategy with random groups

This week we got the chance to check out the current Alpha version of new free to play RTS Total War: Arena from Creative Assembly (watch our first look video), the newest in the line for multiplayer focused online RTS battles and part of the Total War franchise (if the name didn’t give it away) following on from such greats as Rome: Total War, Medieval: Total War and Shogun: Total War. As big fans of the franchise and avid players of the previous games we couldn’t wait to get our hands on Arena and put it through its paces with a more extensive playthrough.

For those unfamiliar with the spinoff title it has taken a huge step away from the epic campaigns and single player content offered in the previous games, instead focusing on an online only game mode where players will be put in a team with nine other players and each of them control only three units in a battle, bringing 30 units total per side into the war in an objective focused base capture game mode.

Stepping into the game for the first time was a little unnerving, whilst we’ve always enjoyed the games we’ll freely admit that we have always struggled with the finer complexity of assembling your units and keeping them in formation, where our battles start out with well-meaning strategy and units in position, but end up a huge mass of everyone piling in for a huge punch up. So much so we’ve never really explored the multiplayer aspects of the standard titles, so being put out there in a multiplayer only game was done with trepidation. Thankfully the fact that we only had to control three units made things a hell of a lot easier and is pretty much the defining aspect of the game; it takes the micro-management of being an overall army Commander and breaks it down into a much more manageable group. 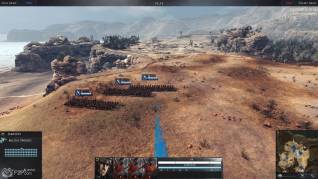 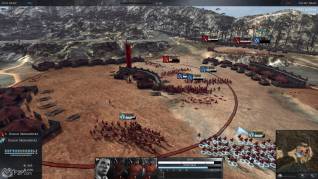 On the one hand only controlling three units is great, on the other hand you are pretty much relying on nine other players to know how to use their units well and how to use effective strategy; it is every team based game everywhere from FPS to MOBA where if you suck at what you are doing then you can pretty much forfeit the battle for your entire team as you are exposed as the weak point. From our experience as much as you have players who clearly don’t know what to do, you have just as many who do understand strategy and how the game works and are quick to tell everyone over the public chat; particularly to be disparaging when people do bad. RTS, FPS or MOBA, people hate being on a team with noobs.

The Alpha doesn’t have a working tutorial in place and so we were playing by the seat of our pants, using some obvious controls and our experiences from the previous Total War games meant we could get by relatively easy. We understood the basic controls, the general idea of advantage from height , cover and other terrain and the general idea that using your ranged fighters in melee won’t end well. That said you do feel extremely vulnerable with only three units, in a normal Total War game if you make a bad choice with three units, well, they’re typically expendable and if they die you still have another 20+ to fulfil your objective. Whilst the same can be said for Arena the fact is that once your three units are gone then you’re pretty much done in the battle, though you have the ability to spectate you can instead leave the battle and start up another battle with another Commander.

The Commanders are currently from the main factions of the Romans, Greeks and Gauls, known legendary leaders as Julius Caesar, Leonidas and Vercingetorix, each of which has their own preferred units and particular traits and abilities they can pass onto these units. That said the units themselves are completely customizable, ranging from the actual unit type you can put under your command where players earn Command Points to travel down an extensive tech tree style unit tree to unlock improved infantry, ranged, cavalry and even siege units. More than that each unit can be customized with its own upgrades and gear to make it more powerful and better optimized for the players preferred style of play. It was definitely interesting to see just how much customization was available for players simply having three different units and made is think more towards MOBA where players would choose a tank, assassin or support type role, so too can players do that in Arena.

There are a handful of maps available right now which have quite diverse terrain features, everything from dense forests and swamps to huge cliffs looking over a lower road (ideal for a ranged ambush). At the beginning of each battle as a Commander you get to choose which of the pre-determined starting locations you would like and then lock in your choice, when everyone is locked in then the game is soon to begin. This moment of grace allows players to chat with each other and come up with a plan of attack based off the units you can see your allies have, players are able to also draw the map to suggest formations and strategy, but as this is Alpha with a mixed range of abilities, understanding and different languages all this time was really used for was drawing penises on the map.

As with any team based game we can definitely see where the advantage will lie with organized group who have an understanding of the game and how to work together. Working with other players will definitely up the fun level of the game, feeling like you had a winning strategy instead of just being lucky adds so much more to the victory, but unfortunately right now we don’t see much of that happening in a team of ten players where you kind of need everyone to be on a similar page. This game more than most others will be extremely difficult to play as a solo effort and, in all honesty, we don’t know how fun it would be to win your part of the fight whilst the rest of the people around you might be losing the greater battle; it doesn’t have the same rewarding feeling as a headshot or a takedown, you get the chance to do one or two big plays at the most before the battle is won or lost and the match is over (usually taking around 10 minutes for a game). 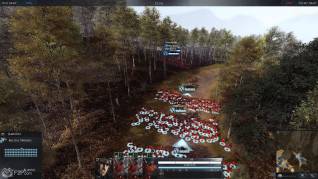 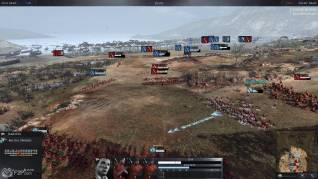 Later games with those who rise to be professional players will definitely be interesting to watch, whilst there is the capability of knowing a map inside out and the best vantage points, you never truly know what points an enemy is going to try and use depending upon the makeup of their army, whether they will be aggressive or defensive. There’s a lot of strategy and being able to change your plans on the spur of the moment will separate those who are great strategists to those who just commit to the original plan knowing it is likely to fail just because they don’t know how to react. The end game is going to be a struggle for players that can’t think strategically and extremely hard for those who are flying solo to really make much of an impression at all.

The graphics, sounds, maps, layout and customization are all excellent and there is a lot of fun to be had, though the long queue times were our primary bane, but to be expect given that Arena is only phase. It didn’t feel buggy or that there was necessarily a lot to develop, things seem to run pretty well and we feel that providing a constant source of maps are put out and maybe some secondary objective maps instead of simply capturing the base or destroying the entire enemy, then it’s definitely going to be a fun game to play.