There is a war. There is an evil giant dragon who descends from the Giant Tree of Eyrda. There is a legion. There are powerful relics lost in previous wars. There is a forsaken world waiting for you.

Forsaken World is the newest Perfect World Entertainment's free to play MMORPG (massive multiplayer online role-playing game) title. And, in case you don't know about it, here we are to review it for you.

Screenshots | Wallpapers | Videos | Profile | Full review
First of all, if you are wondering, Forsaken World is a great looking game which runs smoother on all types of computers. It uses an updated proprietary 3D engine, Angelica, and is not only limited to high-end computers. Graphics are spectacular; it has some of the best visuals in the MMORPG genre. You will appreciate in our full HD videos and our screenshots.

Let's start from the beginning. After a quick download of the client and the updating process (right now, we have a 3GB file), we get an easy-to-use window to set our settings (plus the usual tabs: register, website, patches, forums, support, etc.) and launch the game. Nothing unusual. After selecting the optimal configuration, if you are done with the window and you start the game, you will be taken to the select region and server screen. Once you choose yours, finally, you will be on the login screen. At this point, we have to say that it's a quite beautiful one. The music is awesome and the sound effects are spectacular. Once the music is over, you can hear the wind blowing and the giant hippogryph roaring and beating its wings. 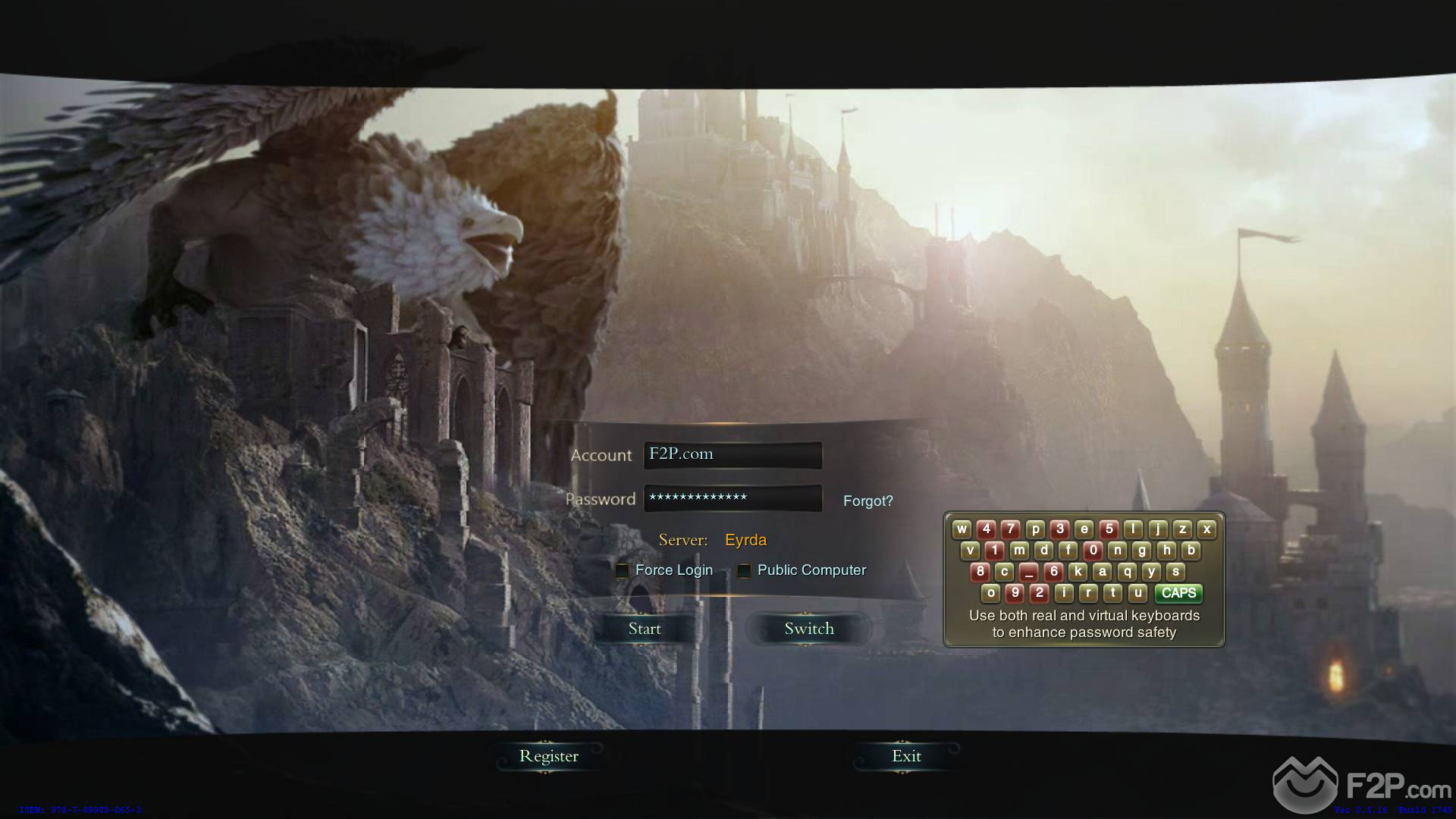 While you think of what you want to be, we will talk you about two very interesting features you will find in the process. In the character selection screen there is a "Micro-Meter", which shows you the difficulty level of each class. Three stars is a low difficulty level, whereas five stars represent a difficult to play class. For MMORPG beginners, we would recommend a low rated class such as the Protector. The assassin and the warrior, with five stars, represent the most difficult classes to play. The second feature we want to talk you about is the Zodiac sign. At the last step in the character creation process you will have to choose under what zodiac sign you were born. Depending on it, you will receive different revelations from the Gods.

As we aren't very skillful players, we choose the bard, a four stars class, to live this Forsaken World experience. And Virgo as zodiac sign, because symbolizes wisdom and talent and we are suppose to be smart and sensitive. 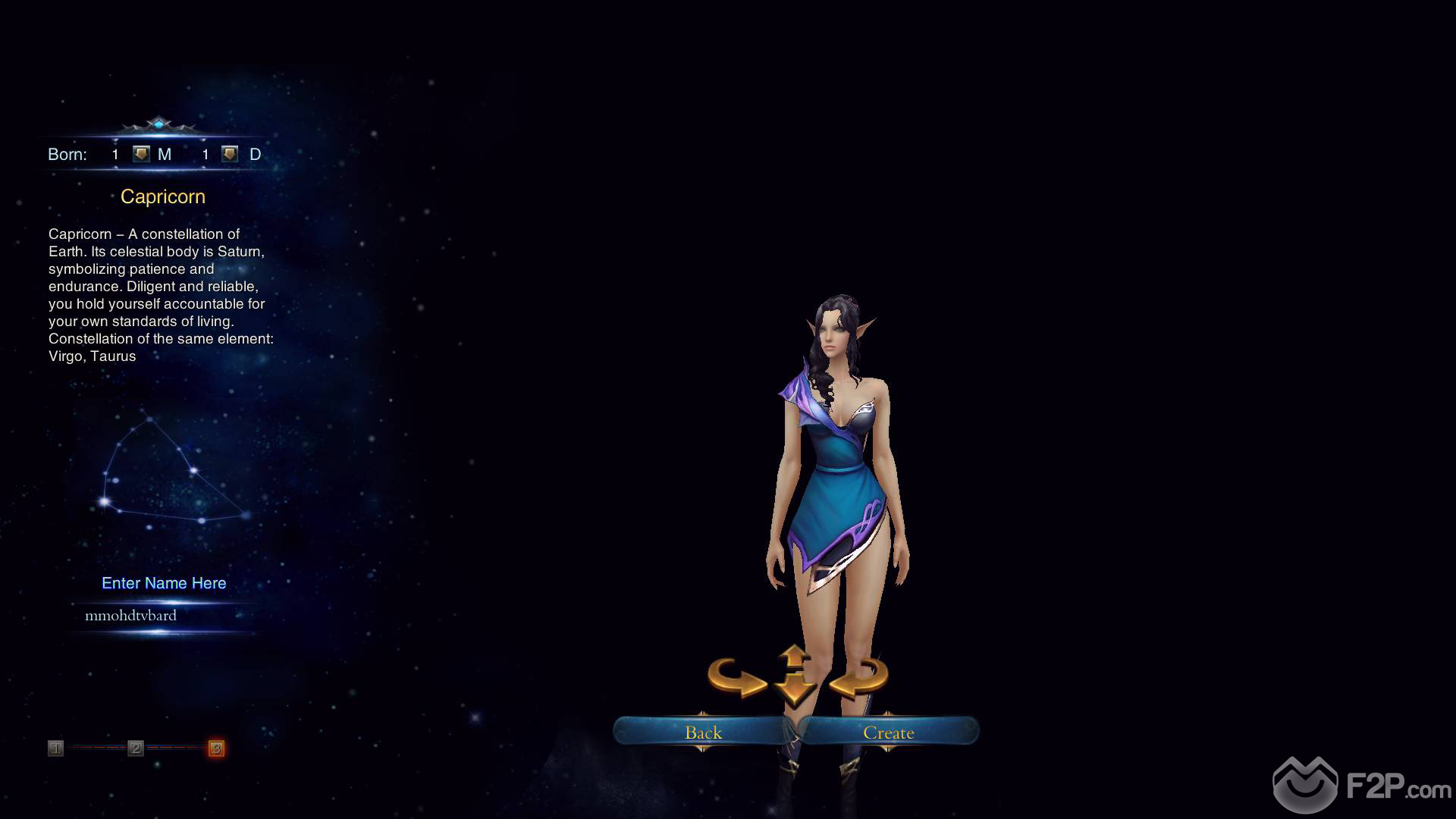 Our adventure starts at Osloh village, the largest of the elf cities (the future doesn't look so good to elves; there aren't so much of them around here). Our first impression is good. As you can see, Forsaken World offers a quite intuitive and simple interface. The ambient music is really immersive. And graphics are beautiful. At the top of the screen, a yellow arrow marks our zodiac symbol. From the very first moment in game we can pray and receive revelations from Gods. With the first one we get a basic equipment: Jacket, pants and boots. 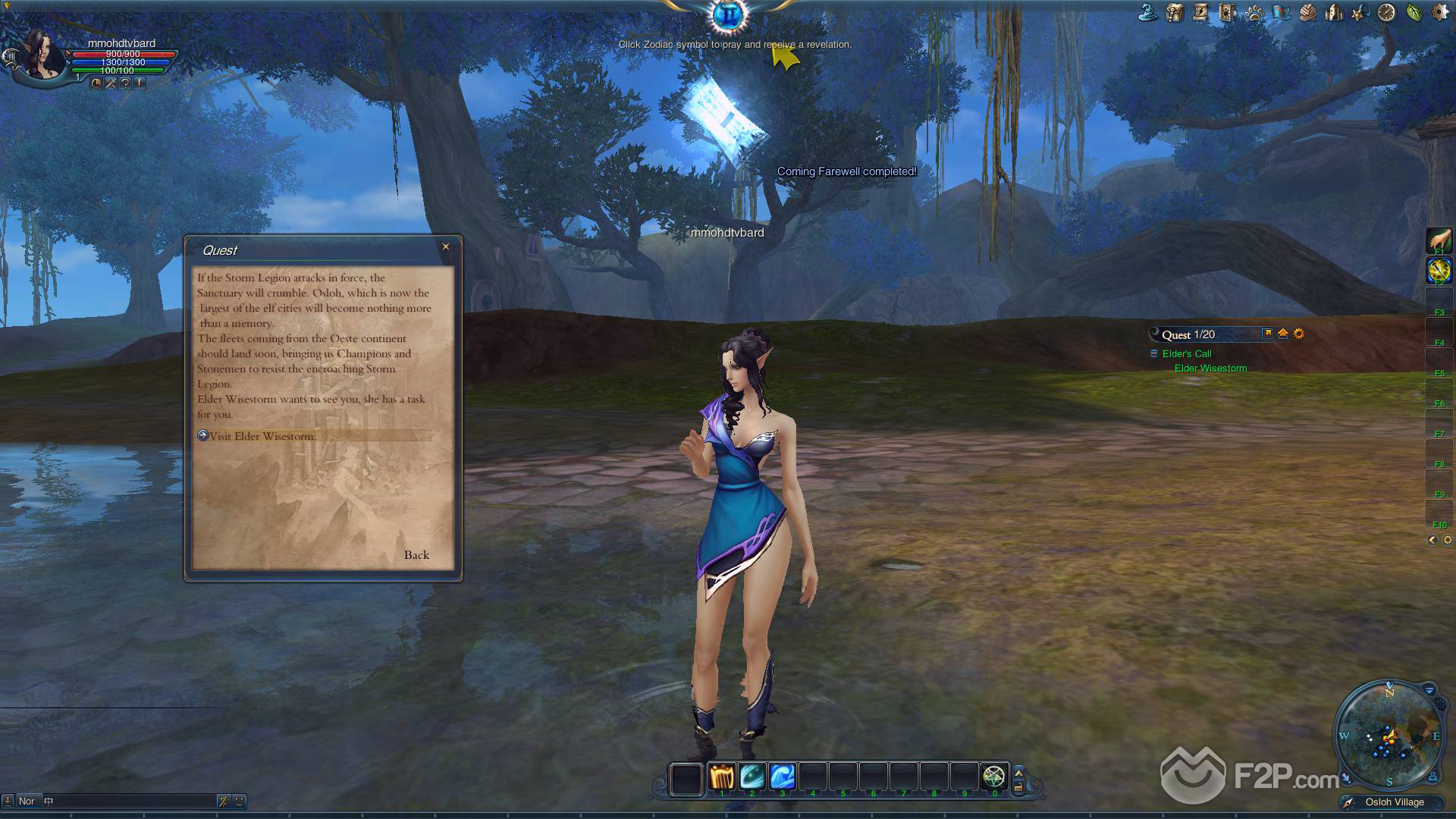 Elder Wisestorm wants to see us, so here we go. The movements are fluid and animations seem natural. She gives us a harp and, immediately, the tutorial arrow teaches us how to equip it. Questing looks pretty easy. On the quest log you will see green words, which you can use to auto-route. If you click on the green words, your character will move by itself to the destination. Às you can see in the screenshots, you will find the key words available to auto-route: NPC quest-deliver and quest target. Nobody forces you to use the auto-route system, but it's a good complement while questing if you don't like to think so much. You don't even need to read the quest to know what to do. 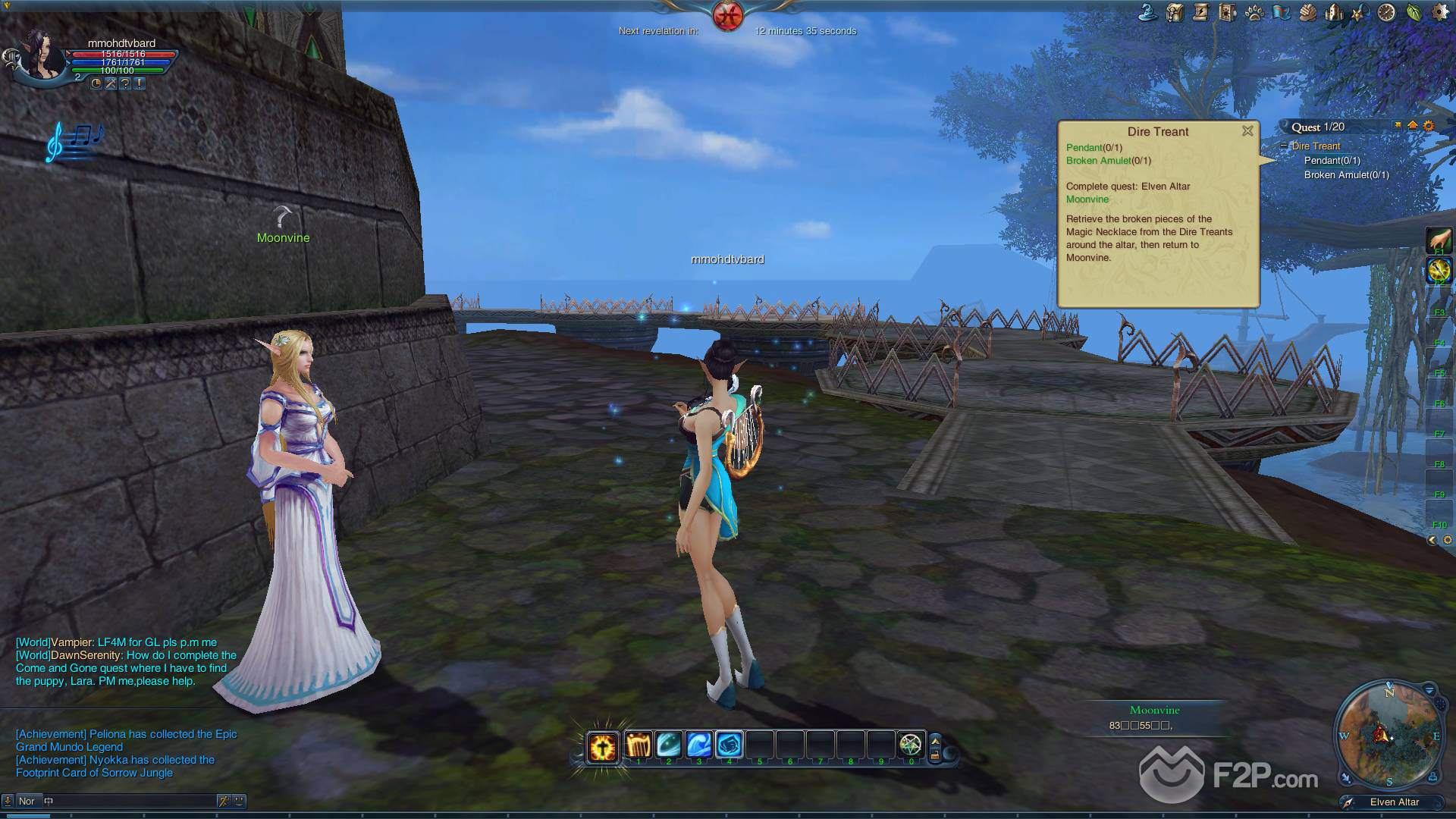 While we were killingw treants, the next revelation was ready. This time, the Gods give us a soulforce skill, which does lethal damage to common monsters within 10 meters and requires 100 soulforces to be used. We can see how many soulforces we have on the green bar under the mana (blue), top left corner. With each enemy you kill, you will get one soulforce. Revelations keep coming and we get very useful stuff, like a potion to increase our combat capabilities the next two hours. The first four prayers of each day will give you EXP and a chance to get gifts from the Gods.

We should talk about the bard class now. As musicians, we can perform tones. Each ability produces a chord (C and D, for now). To perform our first music skill: surge, we need to complete a CCD chord combination. Once we achieve it, our base attack will be increase by 50 for 20 seconds. 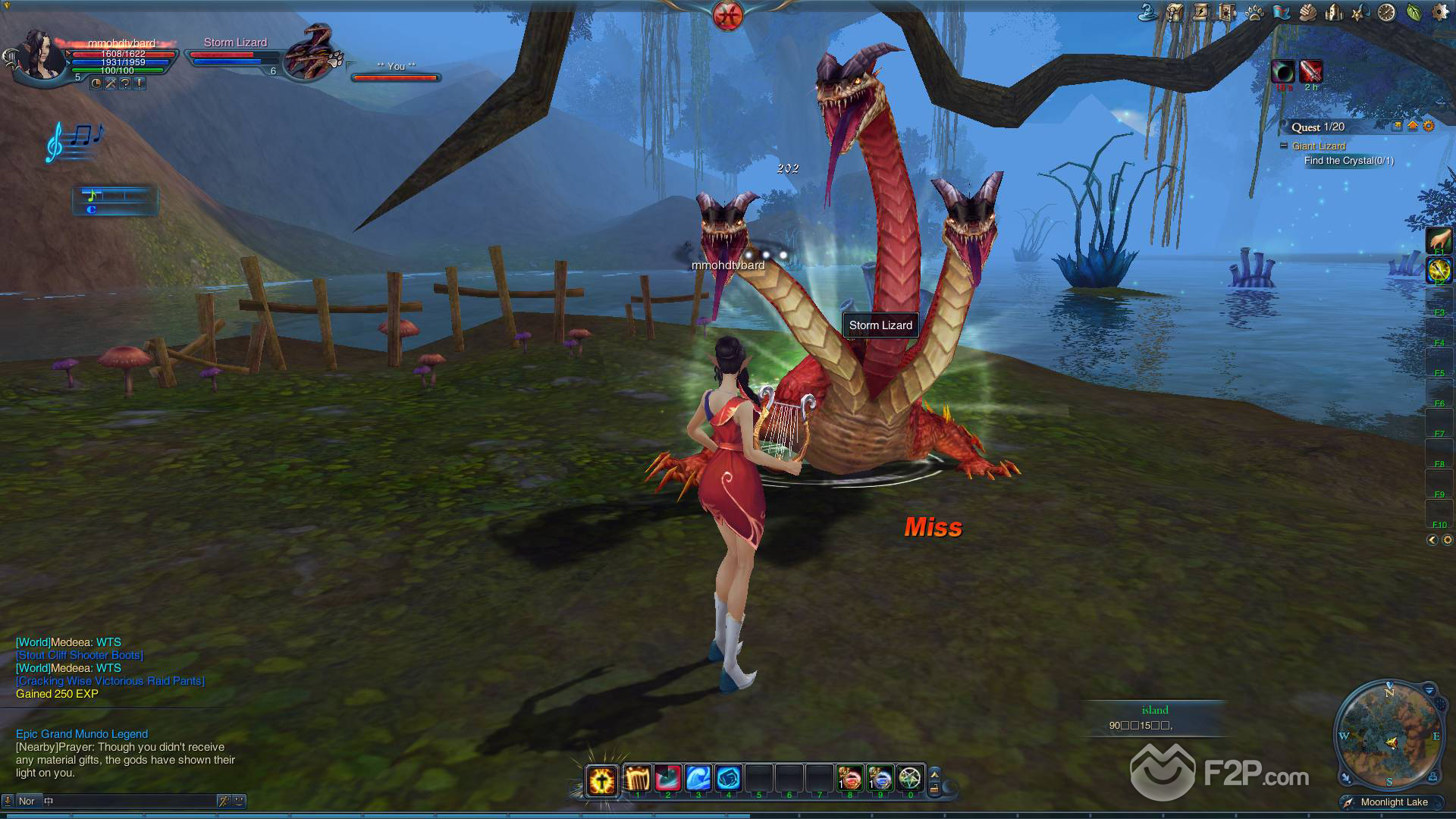 Take a look in Full HD quality at the gameplay experience.

Another funny aspect of Forsaken World is the possibility to change your character's appearance. You can wear and show your gear equipment or your fashion equipment. It's just a visual effect, so you don't have to be worried about yours stats. From our point of view is an interesting role-playing component, a cool social feature to have fun with yours friends and other players. 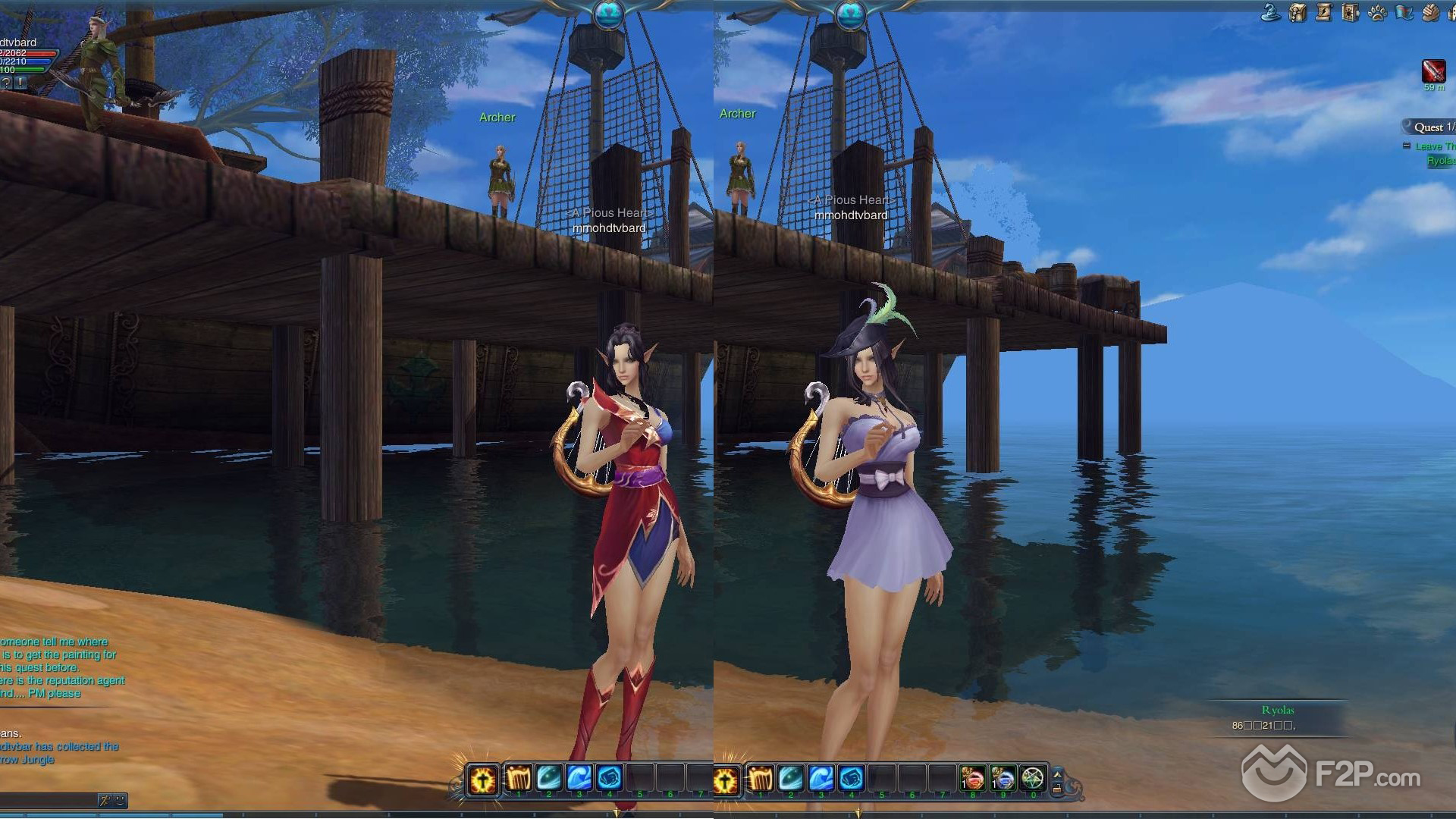 Let's talk about the Eyrda Boutique, a digital store within Forsaken World. Pushing the J key, the catalog will pop up. The currency of this particular shop is the Eyrda Leaf, which you can acquire charging directly from the shop (the conversion rate at this point in time is 40 Eyrda Leaves per 1 US Dollar) or going to the Eyrda Leaf Exchange to exchange with your Gold Coins. The store is organized by tabs (Utility, refine, pets, mounts and fashion). 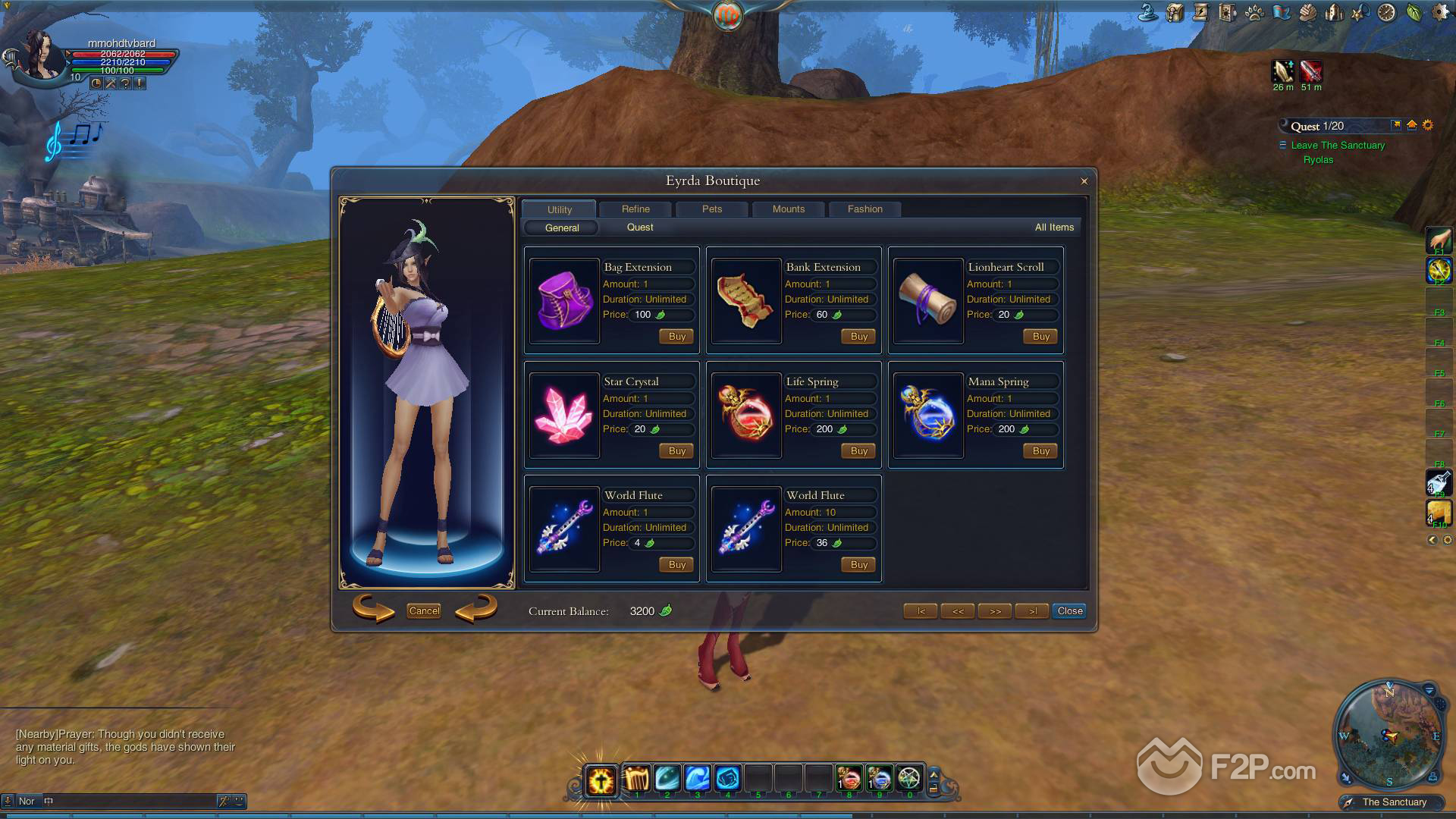 To give you an idea of the cost of items for sale, you can buy pets and mounts for 600 Eyrda Leaves. We tried the Boutique buying a Corrupt Panther mount and an Eggshell Dragon pet, but we will have to wait till level 50 to see them in action. Fortunately, once we left the starting area and arrive to Freedom Harbor, the largest harbor city, we found a high level player. So we can show you the Corrupt Panther. 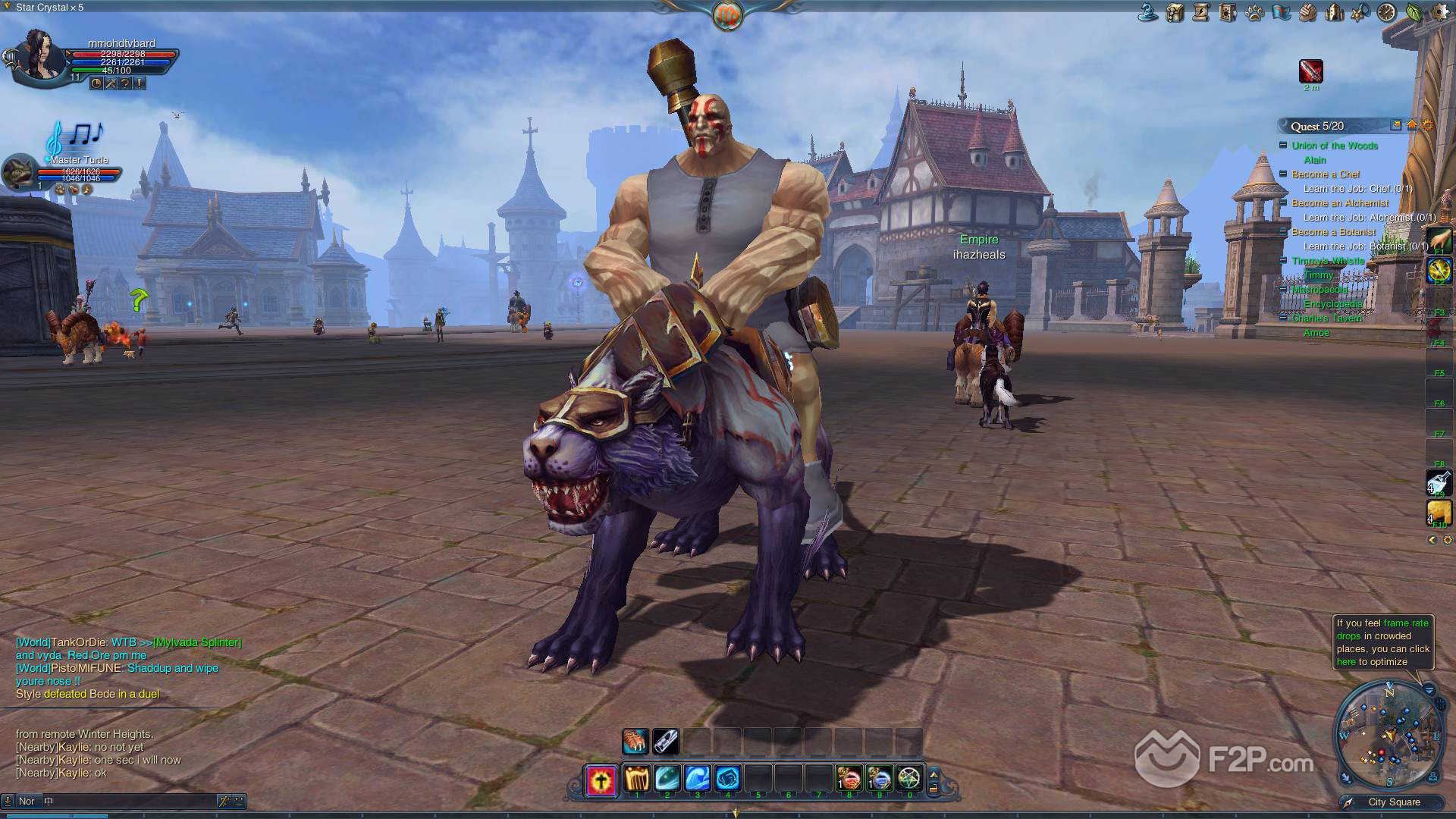 In the city, Rachel, a lovely pet dealer, gave us a free pet. Like if were living the Pokemon tv show, she offers us three pets to choose. We took a turtle. Immediately, we clicked right-mouse button to summon it but our turtle appeared in the Hatch slot of our pet window, which it says that our turtle is being hatched. If the duration of hatching is over 10 minutes, you may get a better pet. Once the time is over, we get a cool level 1 Master turtle. Pets play an important role in Forsaken World. Pets have strengths and weaknesses. For example, Our turtle is weak against darkness attacks but strong against physical and water attacks. We have to feed them and teach them different talents. And they will help us in different ways. 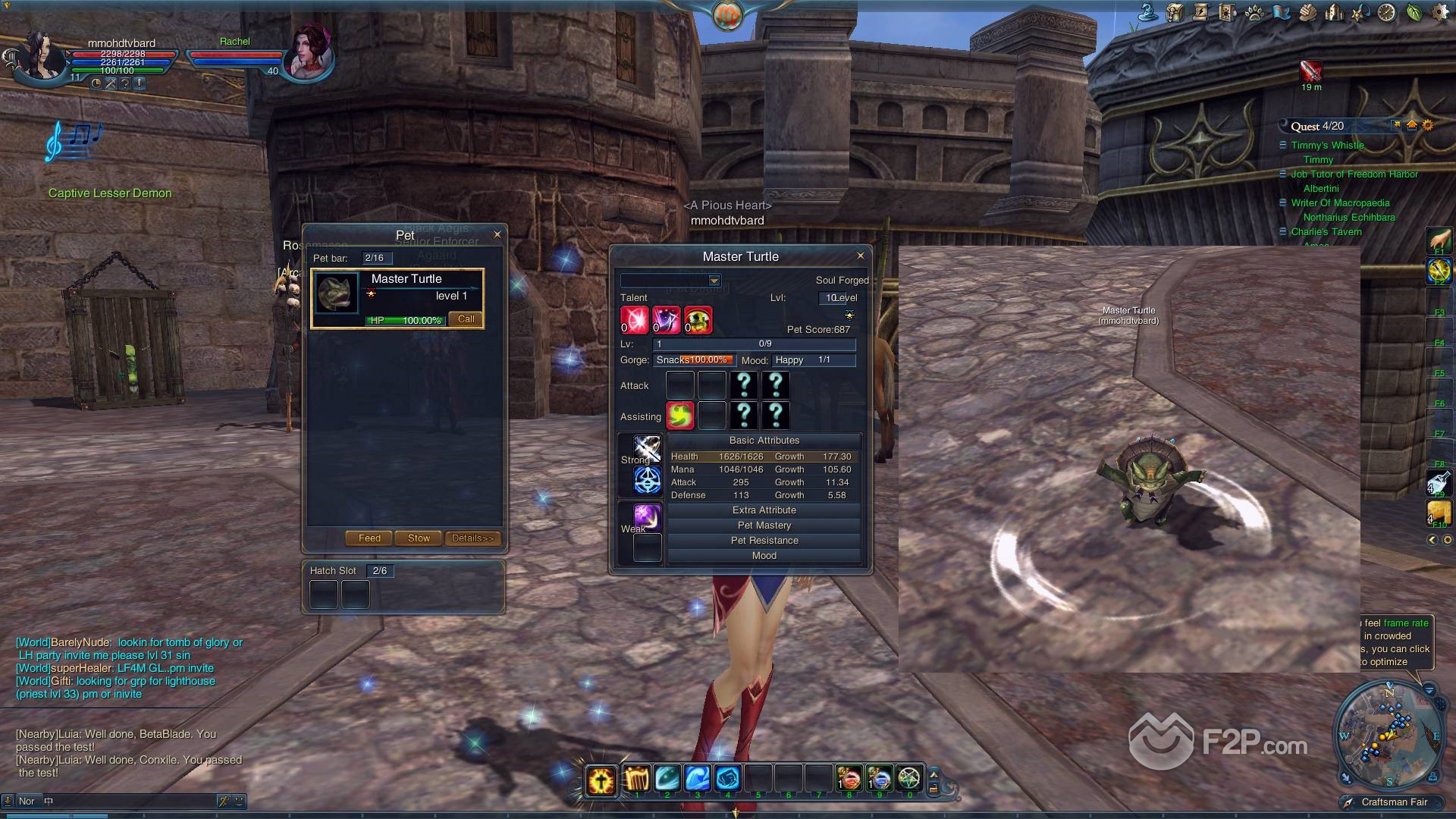 Do you want to visit with us Freedom Harbor? Take a look at the city in Full HD quality.

Work time. At level 10 you will be able to get a job. As we like the art of making potions, we chose botanic and alchemist, spending all our job points. If you want, you can freeze a job to restore the job points, except for socialite, adventurer and merchant. Those jobs can't be frozen. The different jobs are: botanist, alchemist, chef, fisherman, socialite, miner, artisan, adventurer, archanist, tamer, merchant, scavenger, weaponsmith and armorsmith. Once you are botanic, you will have an extra option to display resource points on the minimap; plants, in the case. Our alchemist tutor showed us how to create some potions, but we need to collect some plants in the first place, so we left the city. Plants appear on the minimap as a small picture. We can click on the icon, in the minimap, to auto-route our character to the plant. Now we have all the ingredients we need, we can create our potions. Jobs look quite useful. Almost everyone in the city is crafting. 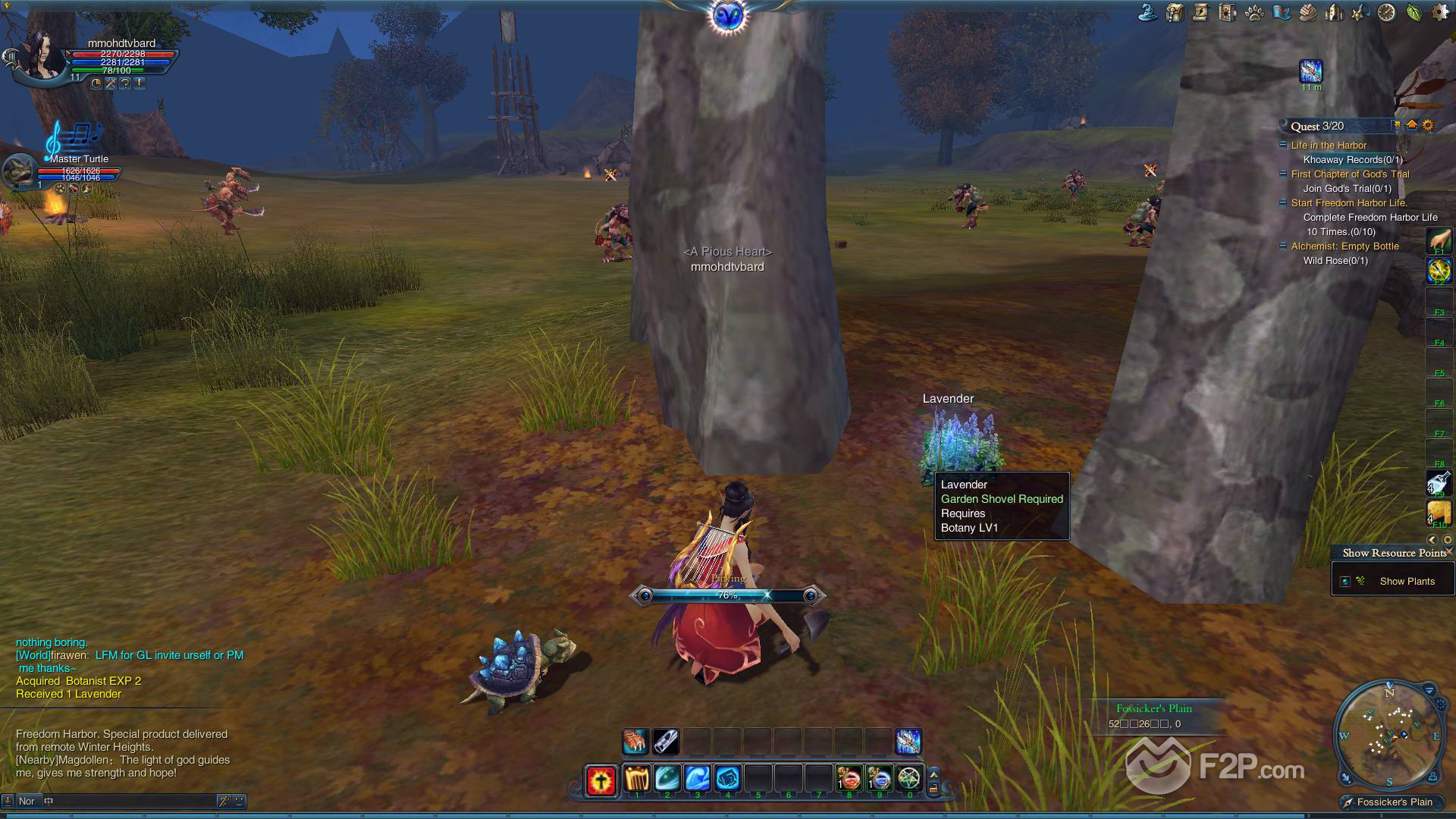 Talents are the last feature we want to introduce you. At level 20, you will start to receive talent points (one per level. At the moment, 50 is the level cap). Each class has three talent threes. Perfect World, the developer behind Forsaken World, has enabled an official talent calculator website. You can find it through this link. It's a perfect place to take a look at how a class could evolve. As you can imagine, talents are the usual: to increase critic hit rate, resistances, mana cost, reduce cooldown, evasion, damage, effective radius, speed, attack power... etc.

CONCLUSION
Given the fact that Perfect World are an experienced developers, we do think Forsaken World is a high quality MMORPG. The game is really fun, immersive, complete and beautiful. During this experience, we have not had any problems at all with the client: no crash or lag. It has been a quite good gameplay experience. We do recommend everyone to give it a try. And do not remember is best feature: free to play. You won't regret it.