Repetitive gameplay, defies some of the expectations for performing stunts due to realism, a little too sandboxy and free-form that some players may feel they have nothing to do

Recently we were given the chance to try out the Alpha access of free to play MMO SNOW, a realistic free skiing sandbox game that offers players a chance to ski at breakneck speeds down beautifully designed mountains, participate in dedicated skiing events or simply relax and explore the huge open world. As said the game is currently in Alpha with the Closed Beta to be released soon, and so many of the features of the game are currently unavailable to test and the game is, as expected, packed with bugs and crashes. What we didn’t expect was what type of game Snow really was.

Players have a choice of three different maps currently available, one being a ski jump, another a downhill obstacle course in the third one being a more open sandbox mountain region with villages, lakes, frozen rivers, and a little extra scenery as well as an area with some man-made jumps and rails. With all the ramps and ledges to grind along, as well as two maps pretty much dedicated to performing stunts, it would be safe to assume that the game focuses on smashing out tricks for points. Surprisingly that isn’t the main focus at all. Whilst you can perform stunts and do indeed earn points for doing a backflip-tailgrab-360-ollie-with-a-twist whilst we were expecting something along the lines of SSX Tricky or the old Cool Boarders games with gravity defying feats and helicopters style spins, the game focuses on considerably more realistic stunts. A single slow forward spin, a slow and calculated ski crossover, a barrel roll with a well-timed land in third person view mode is more what players should expect.

On the one hand it’s more realistic, on the other hand as it goes against what we were expecting/perhaps hoping for, it almost felt a little slow and a little boring. What was a little more entertaining was trying to make your way down the mountain without ending up as a crumpled pile among a rocky outcrop. The free sandbox movement allow players to make their own ski runs, finding out the best “lines” and throwing in the odd jump, twist and roll as they merrily make their way down the mountain and beyond; a vast difference to other skiing/snowboarding type games where players are generally fixed to a set route or course. Every time a player wipes out they have the option of respawning where they were or choosing a different spawn location from around the map, so they can quickly try out different areas without having to manually ski there each time.

This is undoubtedly where most players will find the most fun in the game; trying to go further, faster, finding as many mini jumps and ledges to drop off and perform a quick trick and make the most of their individual runs. The problem is that, currently, that’s about all there is. Whilst it’s done well and with the Crytek engine that the game has been developed on it all looks pretty decent, particularly for Alpha, but unfortunately it feels like Snow really falls short of things to do. With currently no objective-based goals there is only so many times you would think there’s only so many times you can go down the same mountain, regardless of how many routes you find, before it starts to get a little stale and so we can only imagine the number of maps the developers are going to need to churn out to keep people entertained.

The maps are pretty big, with all the possible routes there are near infinite ways to make your way down the mountain (again adding to the realism of a real skiing experience) and the various landmarks break things up a little. The problem is that as you get further away from the main starting locations the graphic details really start to dip to the point where the trees were like cardboard cutouts as opposed to the more impressively rendered trees at the starting area; hopefully they will be replaced for beta release though there are just temporary. 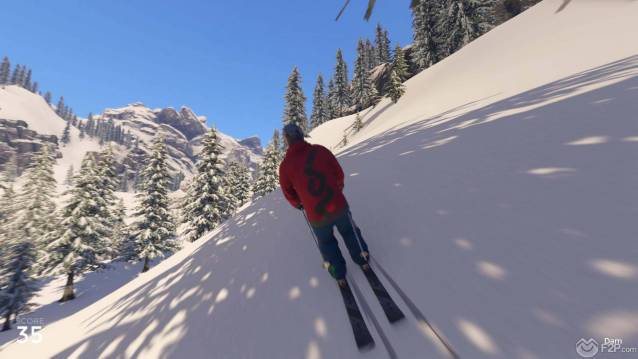 The customisation is actually pretty good, players can go into the store and currently there are a wide selection of gear and apparel to dress your character up in, ranging from helmets, masks, skis, gloves, sweaters and more with hundreds of available items. Most of them are branded with real-world clothing brands as well as a few humorous items such as top hats and pumpkin masks (though it kind of breaks away from the “realism” that the game is so ardent on keeping in the game).

The game looks to be promising a variety of features, from events, leaderboards and multiplayer play, which is done by joining or hosting rooms /lobbies, though that feature was unavailable or incomplete during our test so we had no choice but to play the Solo game option (presumably the same maps but with no other players on them). The game still has a few issues, bugs and crashes between loading screens and maps, but nothing we don’t expect to be fixed come release.

…. right up until we switched to First Person mode. What a complete game changer! Suddenly we were hurtling off huge drops, clenching our butt cheeks as we skimmed past trees, the roar of the wind in our headsets and suddenly this game came alive. It was no longer a poor mans’ SSX, it was the game it was designed to be: an immersive skiing simulator. As we felt our hearts racing a little faster and our smiles growing a little wider it was with this that we remembered that this game has been designed for the Occuls Rift. Albeit it may be a bit niche for those gamers that never invest in the hardware, but for those that do then we’d definitely put Snow at the top of the games we look forward to trying out on it. Even without a Rift of our own it was a much more meaningful experience and skiing down a frozen river and jumping off a waterfall was suddenly infinitely times more exciting, challenging and fun; if you do get access to the game then do yourself a favour and leave the third person viewpoint behind; first person is how the game is meant to be experienced.