Nords: Heroes of the North Review


This week we took some time out to check out the new free to play RPG strategy from Plarium Nords: Heroes of the North. Recently published, the game is available on Facebook and through your web browser and we spent a couple of hours playing through some of the earlier content. Now anyone who has read our previous reviews of Plarium’s games (Soldier’s Inc, Total Domination, Stormfall: Age of War) you will see that there’s a similarity to the reviews; we review every game on its individual merits but it’s worth mentioning that each of Plarium’s games is essentially the same game in terms of mechanics and systems but with a different theme/skin/graphics/storyline.

Nords isn’t any different, well, not entirely. Whilst previously we’ve felt that the copy/pasted format of the games has just come across as being lazy we can hand on heart say that with Nords the developers have been anything but; this is the game that the rest of their titles should have been copying. 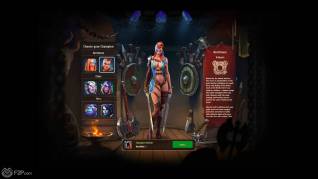 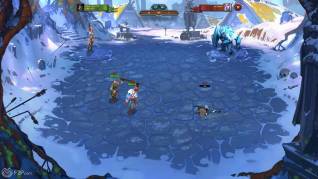 Starting out we’re put in charge of our own stronghold as a new Lord Marshal tasked with building up a base, constructing buildings, acquiring resources, training up units, before all that starts though you get to choose your Champion from the three united factions that have come together to fight the frozen undead that are tearing up the kingdom. Your Champion can be from the Orcs, Elves or Northmen (essentially Vikings) and gives you a male or female avatar (no customization unfortunately) but depending on the faction it will change the appearance of your main keep building, but that’s about it (we wouldn’t have minded seeing more buildings adopt a unique theme otherwise it seems kind of pointless). That said if we’re talking about the look of things then lets address the graphics; they are fantastic, not just in comparison to their other games which were always a little on the weaker side, but Nords looks colourful, well design, and follow the same humorous tone to the rest of the game. The detail of your stronghold itself is pretty impressive, the little nooks and crannies, the ton of detail, the characters, the UI.. it rivals some AAA browser games for its sheer look and we can see it being a big hitter particularly on Facebook.

As with the other games Nords offers a rather linear quest progression, both King Björn and his bard Skald being the primary NPCs that tasked us with missions and guided us through the UI for our tutorial, but as ever the “tutorial” continues for a long portion of the game. Being guided from one section to the next, told what to train, what “Blood Pacts” to sign, what to build, it does get very boring but rather necessary to reap the rewards that completing quests gives you. Unfortunately the result is that for the few hours of gameplay that we had we just felt on autopilot, clicking on shinning button to the next as commanded without any real thought or input, it is handholding to the extreme and we’re honestly not sure how many levels it goes on for. The dependence on quests is quite restricting and rather mindless; it’s not that complex a game to work out. 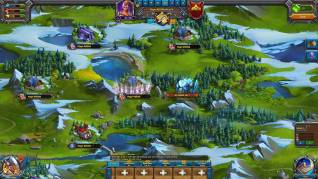 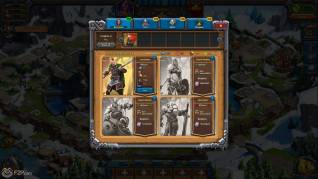 As far as questing goes the NPCs are a saving grace, albeit their presence is more predominant in the earlier portions of the game, with fully voiced characters and a light hearted and actually quite funny script, it was at least interesting to read/listen to what they had to say for once. The developers have brought in professional voice actors including Patrick Warburton who has done plenty of voice over work in his time (most notably for some he does the voice of Joe Swanson in Family Guy) but has also appeared as a key character in Seinfeld, Men in Black II, Rules of Engagement and other shows. Once more this emphasize how bigger the budget and how much more effort has gone into the game in comparison to the previous titles.. and it really shows.

Constructing buildings and building units is still the same old rote, players are required to sign Blood Pacts “with other town and regions of Shingard”, essentially this is just a technology tree and you can trade with other players. The Blood Pact tree itself was also rather linear, long stretches of technology chains with no deviations meant little personal customization when it comes down to what you can build/train, which is the same as the other games but we were hoping for a little more. 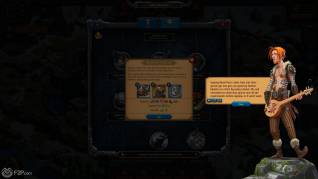 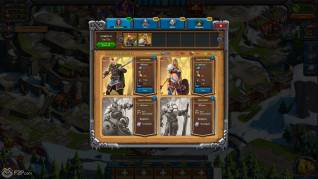 Training units and sending them into combat was improved with some flashy animations where you could watch the battle play out against the minions of the Ice Queen or fighting against other players, again it was a vast improvement but still has the same “just build a huge army made up of different units” style of “strategy”, which wasn’t particularly interesting.

Our biggest issue was still there, combined with the linear technology tree and likely similarity of every player’s stronghold in terms of what they can train, the Black Market is still a primary feature where players can still spend cash to buy unique things to give them an unfair edge. In particular the towns wall defenses still require premium paid for currency to construct as do a lot of the more powerful buildings and units, albeit they are level locked, the fact is that Emeralds (the premium currency) aren’t that easy to come buy unless you’re one of the higher ranking players, so whilst great for keeping the game competitive we feel it only servers to make a snowball effect where the powerful stay powerful unless you start pumping a lot of cash into the game… and people do.. these games are really popular and do really well financially. Whilst it’s great for making money it ends up becoming a battle of the wallets for those that want to stay in the running and really pushes out the more casual player.

All in all the game has absolutely ramped up the polish of the game in comparison to the previous titles, it looks fantastic and considerably more appealing, at various elements throughout you can tell the level of detail and care that has gone into its construction and there’s plenty of elements that make the game shine. Unfortunately all that glitters isn’t gold and, for us, under the surface the game still suffers from the same tedious gameplay mechanics, linear progression and dubious endgame financial crutch that players need to rely on to keep ahead; fine for a business model where you want to make money but for a F2P game that remains some integrity with casual players then we think it falls short. Of all the games in Plarium’s arsenal then Nords: Heroes of the North is definitely the one to go for, but for us the grind was just a little too much to make us want to keep playing. 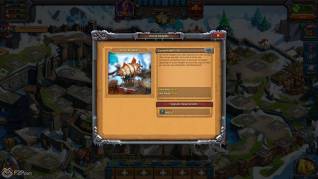 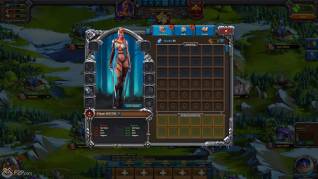 Play Nords: Heroes of the North

Nords: Heroes of the North profile

Nords: Heroes of the North wallpapers

Nords: Heroes of the North screenshots

Nords: Heroes of the North videos

First Look at Nords: Heroes of the North