Good - gameplay that delivers exactly what it promises, an action packed slog-fest in the search for Epic Loot

In our first look at The Mighty Quest For Epic Loot (TMQFEL), the MMO… actually we’re not quite sure what type of MMO this is because there really is nothing like it on the market. Either way it’s from Ubisoft and it is, as the title says, indeed quite epic. In the game you get to invade other people’s castles, fighting past their monsters and traps that they have so lovingly prepared for you and try to steal their hard earned loot from the treasure vault. In the meantime those dastardly adventurers are no doubt trying to do the same to you in your castle.

You jump into the game pretty quickly, some fluff animations (though nicely done) tells you the backstory of the game and why you’re out doing what you do; robbing other people’s castles for their loot. Character creation is little more than choosing from one of three currently available classes; Mage, Knight and Archer, though the Mage is currently locked up to premium members and you get to name your character. Making a unique identity for your character isn’t the point with TMQFEL, your name is all that anyone will care about when they see it at the top of the scoreboards. 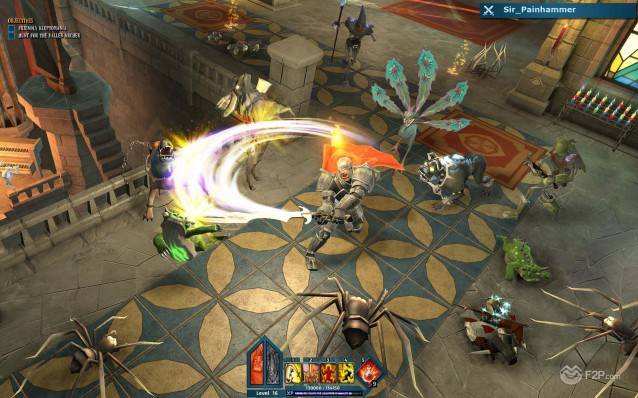 The game walks you through an initial tutorial, step-by-step showing you how to level up your character, equipped gear and fight your way through your first few AI castles. It’s simple, it’s casual, it’s a pretty basic idea… but dammit if it isn’t fun. The first tutorial quests revolve around some frog dude called Lord Snottington, fighting through some of the lower castles in his realm as you get to grips with the controls until you slowly get a high enough level to successfully take on his own castle, fighting through waves of frog like mobs and eventually reaching the end room which culminates in an epic boss fight against the snotty frog himself. His mooks were quickly dispatched with a few well-placed charges and swift kicks, but when going toe-to-toe with his royal wartyness we quickly realised that we should have stocked up on more health potions. A battle of attrition that resulted in a few misplaced attacks by us meant we were killed, unexpectedly you can actually pay some of your coin to reappear where you dropped and carry on the fight, but you lose a lot of the reward bonuses you could have otherwise gained.

The game also walks you through your own castle design, helping you lay down foundations of some basic building components as well as your first mob defenders (to be honest though in these early days they don’t do much and don’t pose much of a challenge). One of the things we really liked with the mobs is that each of them also comes with one of three different attack types they can employ in battle, meaning that even when coming across a monster you are familiar with that isn’t to say they will always attack in the same way. The defending portion of the game picks up in pace after a few levels when you have gained a variety of different traps and mobs to place, as well as a high enough level to start adding extra rooms to your castle. That was one thing we particularly liked about the tutorial, it didn’t feel separate to the game but instead slowly introduced features at an easy to digest pace. 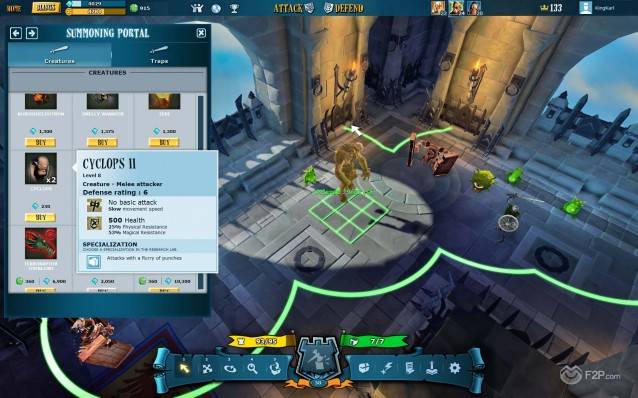 As a player you level up both your hero, through successfully completing castle attacks you gain XP and unlock new abilities/attacks, and also you can level up your castle which in turn will enable more mobs and features that you can take advantage of. It’s an interesting duel system, but the reality is that to have any success you have to focus on each aspect of the game; the loot you steal from attacking one players castle goes into your own, if you don’t build up your own castles level and defences then you’re not going to keep any of the horde you managed to acquire. Which would suck.

As you level up you’ll also be able to equip new gear; weapons, armor and accessories that will boost your stats and make you an all-round powerhouse. Available through completing quests, buying them from the shop and also as loot drops in game when killing monsters, gear has the classic World of Warcraft tiered levels, from white common items up to orange legendary, and as the castles get more difficult it pays to have your gear in tip top shape (plus what kind of hero runs around with second rate armour?!).

The game isn’t particularly amazing graphic wise, they’re not trying to push the envelope and raise the bar, but they’re sleek, colourful and really fit the tone that the game is trying to set.  Character movement works well and the style used in both the game as well as the illustrated animated still images adds to the casual and charming nature of the game.

The sound is light and atmospheric and adds well to the pace of combat, the music is subtle and not overly imposing to drown out the feel of the game nor to annoy you with any monotonous repetition that can so often occur. 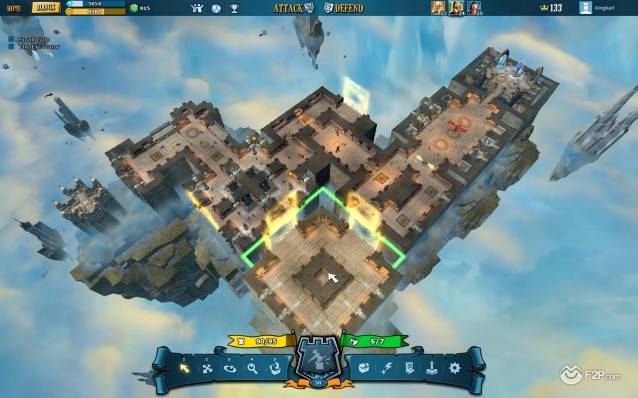 It really is a different game, like nothing we’ve played before, and the ease at which you can simply pick up and play for 10 minutes or being engrossed for hours is why this is going to appeal to both the casual players and those hard-core gamers who want to compete to be on the top spot of the leader board. With the potential of constantly adding new mobs, traps, rooms and items we think there’s going to be constant replayability with The Mighty Quest For Epic Loot, and one that we look forward to.