SkySaga is a new soon-to-be-released free to play sandbox developed by Radiant World. A new phase of Alpha testing was recently released and we got the chance to check it out and see the game in action ourselves for the first time.

With a cursory glance, the game is a Minecraft style game on the surface only with much better graphics, you can destroy the block based world to gather resources and then combine them to make items and build in the open sandbox. However, digging a little deeper we began to explore some of the more unique elements to the game that set it apart from Minecraft and really starts to make itself stand alone.

To start with you get to choose from a handful of different races in the game, monkeymen, lionmen, dragonmen and… simply men (all with female counterparts of course) and they can be customized in a variety of ways giving you the type of identity players expect of an MMO. We could choose what our home island terrain was going to be; forest, desert or jungle, as we’d picked a lionman type race with red hair we had some Final Fantasy VII flashback with Red XIII and so we went with a Cosmo Canyon desert theme. Your home island is your safe haven where you can build up your base of operation, create different workbenches to craft various items, destroy and rebuild it in whatever shape you like and generally have a place to chill. Quite the contrast between Minecraft where you’re plopped in the middle of nowhere and have to survive by building your first shelter before monsters spawn at night. 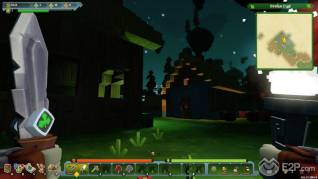 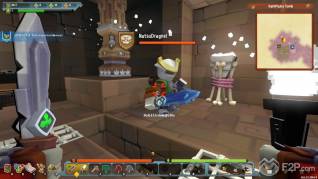 So is SkySaga just minecraft on easy mode? Far from it. The action we were looking for came in the form of Portals, our home island came equipped with its own portal that we had to open by crafting different keystones from unique resources; depending on the resources used would depend on the environment type that the portal would open up to. These new locations are dynamically generated so they are never the same, owing to the games full title Sky Saga: Infinite Isles, we were transported to these new lands and the only way out was to quit them or find the exit portal back to our home island.

The portal lands were pretty big, but as often as not come with key landmarks and map indicators to show you where you need to roughly be heading, our first forest map houses a large castle filled with undead and skeletal knights, heading deeper down into the crypts the enemies grew a little tougher and appeared more grouped up. We died at least 4 times on our descent down into the crypts simply to these mobs alone, with crappy weapons and no armor at this stage the enemies hurt, each time we died we dropped all our stuff (except bound gear like our starter weapon) and had to recover our items each time. It was a little frustrating at times, but then we realised that with every swing of our sword our stamina was dropping, then realised a lot of our deaths were because we’d been jumping into battle, swinging like mad, then standing there like a lemon with no stamina left and unable to fight. At the end of our portal was a huge skeletal knight with a massive shield and sword. Yeh he killed us as well. However, when we came back with lots of food and a bit more know-how we managed to hold our own; attacks from the front were doing no damage as he was blocking them, so we had to keep flanking and circling him trying to attack from behind, which felt a bit clunky, but overall the PVE experience had been fun. By killing him we got access to a big treasure chest filled with loot and access to the return portal. 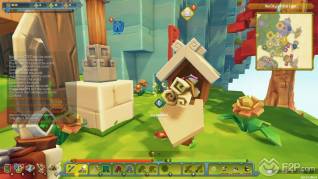 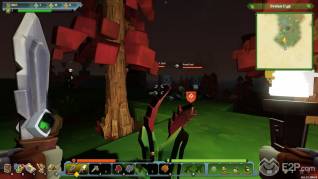 After our foray we were lead to the City of First Light, the main city in the game and quest/social hub with lots of NPC vendors and the three main Guilds: Settlers, Gladiators and Explorers. You can pick up quests for all three and by completing them you get not only rewards and unique guild coins to spend on their Guild vendors, but faction points that increase your rank with them. The Settlers guild focused mainly on helping us build up our home island, teaching us how to craft then tasking us with making certain items or gathering specific resources and rewarding us with new item schematics along the way. Crafting is pretty easy, either using handcrafts or specific workbenches, you can open up your schematics book and choose the item you want to craft, drag the appropriate resources from your backpack into the schematic slots and start crafting. With workbenches you can choose how many you want to make and actually leave the resources at the bench so you can let them make themselves and pick them up once they are done.

The Explorers Guild focused on the PVE aspect of the game and sending us into unique portals, to hunt down specific enemies, and would reward us with gear to make the job easier such as a Forest Sword that would do more damage on enemies in forest environments. Some of the keystones acquired could only be used for a certain amount of time, leading to unique areas with unique bosses that get more difficult as you level up and drop even better loot. 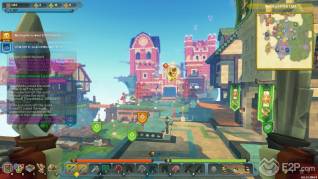 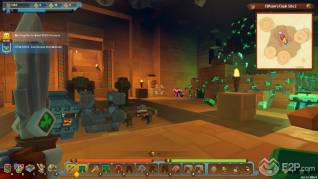 The Gladiator Guild, for us, was probably the most fun aspect as it revolved around PVP and competing in the instanced based arena battles; there were Team Deathmatches or Capture the Flag. We’re a sucked for objective based combat instead of an all-out brawl so we concentrated on Capture the Flag. Our first battle was a 1 v 1 and was kinda fun even if the map was a little large and complex for just two players, however, it was simply that we were the first to join the new game and other players slowly filtered in with a max of fifteen players per team. The problem we saw was you could choose which team you wanted to join, so what was a 2 v 1 for a little while then became a 3 v 1 when the new person joined our team prompting our single opponent to “WTF?” in chat and leave. I decided to try and balance things up and just took it on the chin with a 2 v 1. Right up to the point where I got to the enemy flag and they had one guy guarding it in full armor with a huge axe and me with my starter sword… not only that he had built blocks all around the flag so I couldn’t get access to it and the blocks were seemingly too high a quality resource that my started pickaxe couldn’t destroy them… so yeh I quit.

My second battle was a lot more fun as the teams were heavily filled out already with around 10 per side, even though a lot of the players had a lot of high PVP gear (bought from Gladiator Vendors) there were enough players on my team that whilst they fought I could do other thing. Taking my knowledge from the previous game I started by destroying the main stairway blocks leading up to our flag to make it difficult for the enemy to get to it. I also focused on trying to destroy as much as their base as I could leaving huge openings in the walls to quickly get inside, and making alternative stairs at the back of the building for us to run up. Unfortunately seeing what I was doing our entire team, even the geared up guys, started following suit and everyone was focusing on building and destroying that no one was going for the flag! With some organized PVP guilds we have to say that PVP is going to be really really fun.

SkySaga has a lot to offer and we definitely enjoyed our time playing with very little in the way of complaints at this point. There’s lot’s to see, build and fight, it covers the main elements of MMO gameplay very well (social, PVE, PVP, crafting) and allows you to enjoy it whichever area you like to focus on. With a group of friends or a guild then we think the more challenging PVE, greater crafting opportunities and tactical PVP will be an even greater pull to the game. 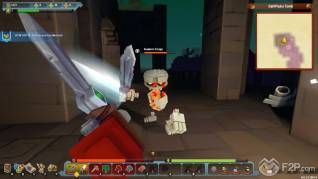 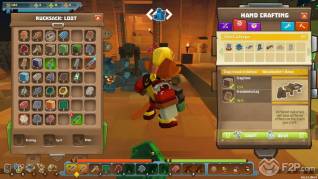