We had the chance to try out the early access of Epic Games’ new MOBA Paragon, a free to play third person title that players who have paid for access have been lucky enough to try out in preparation for the open beta this summer. Another MOBA on the scene isn’t a surprise, it’s a constantly growing genre but one that we feel isn’t bringing enough innovation and way too much copy/paste of the same mechanics from the big hitters such as Dota 2 and League of Legends; we were keen to try out the game and see where we felt it fit in terms of the genre as a whole.

We should preface this by saying that the few hours we played the game wasn’t enough to get us to rank 3, which is needed to start PVPing, so our experience was based around fighting with and against bots (after unsuccessfully queueing for 20 minutes to get into a co-op Player vs AI match where people kept dropping in and out of the group as it was forming, possibly down to the time we were playing). It was enough for us to see what the game was about if not enough to start utilizing tactics to see how heroes work together, but that is a detail to the game that we can overlook for now. 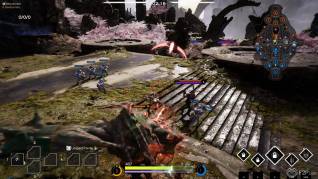 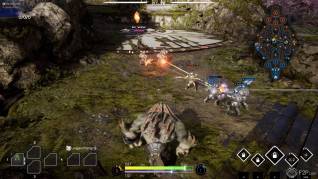 Our first impression has already been formed for us by the cinematics and videos we’d seen of the game using in game footage, it’s hard to deny that insofar as best looking MOBA on the market the prize definitely needs to go to Paragon. The game looks stunning, from textures, characters, ability special effects and more, but the beauty is more in the level design of the map (currently there is only one map, whether this will always be the case we’re not sure). As a third person game Epic Games have most definitely used this in a way that Smite didn’t, whilst Smite was a third person game it was still essentially played on one level, in Paragon you have full verticality with vision and attacking, characters jump up into the air and can be targeted, they can take up positions on bridges and higher ledges to shoot down at their enemies, or they can head down into the jungle canyons in search for camps.

The game looks and feels like a third person shooter, but retains many of the combat elements needed to retain its MOBA status, most noticeable with the range distance of abilities, playing the archer hero Sparrow it was noticeable that our attack range wasn’t as huge as we’d expected so sniping players across the battlefield is never going to happen. Instead battles are generally more close quarters, forcing you to keep behind the backline and pick away at the enemy, if they get close to you then you are most definitely in trouble and when this happened it perfectly highlighted one of the things we really don’t like about the game; the mobility. 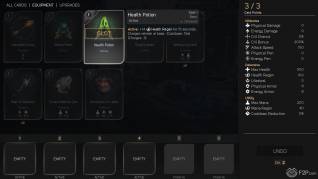 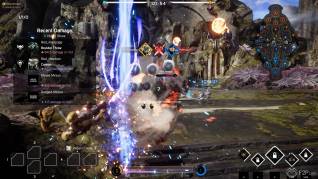 When in combat you move so slow, it feels like you are at a walking pace and definitely removes that more frantic shooter precision that we have seen in other more recent third person MOBA-style games (Gigantic, Paladins) where you can jump and juke out of the way of attacks. When the enemy is on you in Paragon you simply have to turn tail and run, and not particularly fast if you aren’t in “travel mode” which allows you to run at greater speeds, but doing so in combat and taking a hit will stun your character, making it only really useful for traveling between lanes or moving from base back to the front line.

You will have to travel to the base quite often, easily done using the B key teleport feature, first and foremost outside of items and allies, there’s no way to heal yourself or replenish mana in lane, but more importantly you’ll have to go there to add your Cards. Throughout the game you acquire Card XP (CXP) that will grant you a card point each time the bar fills up, with enough points you can then spend them to add cards into your card slots (bound to the 1 – 6 keys) for a variety of passive boosts, abilities and items such as healing pots, scouting drones and other items, which have a number of uses on them but are refreshed when you go back to base. Cards are customized through your own deck, earning them by completing games players are able to customize their hero with more personal attention outside of their QER abilities. Every card has a cost, so players need to decide whether to unlock multiple low level cards, or save up for more costly/powerful ones, which can be done by a player focusing on gathering CXP through Harvesters and Camps that can be found in the Jungle areas. Thankfully you can also discard cards taking up a slot and replace them later into the match, so you can juggle your build around a little during the game, which we think is a pretty great idea and one of the more innovative ideas allowing players to react to the battle. 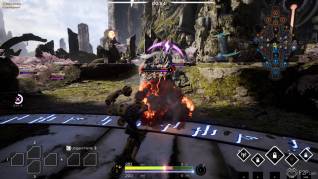 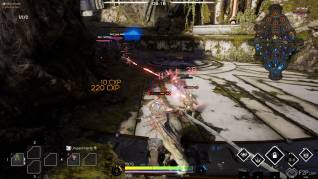 Our games all felt fairly similar, as we’d stuck with the same character to try and get to grips with her instead of switching between different heroes, but even outside of that there doesn’t feel like there’s much to do outside of push your minions down the lane and occasionally try your hand at clearing a camp. On a personal level we (the royal we, but actually the author) have gravitated quite heavily to Heroes of the Storm where there are multiple different objectives in a single map, and each map has unique objectives, and.. there’s multiple maps. Paragon has gone more traditional with a single map, pushing the lane, killing minions and snagging last hits, dropping the towers, destroy the core, and getting your “carry” to pick up boosts from the Jungle camps.

It’s all been done before.

The two stand out things with the game, outside its graphics, are the verticality of the maps, which in fairness do change gameplay quite a lot, and being able to change your cards in a game (though there’s elements of this in other MOBA and we’ve seen the “collect cards to customize your character” in the more recent MOBA Paladins, which is also a third person game), but is it enough? Game length Paragon certainly leans more to the LoL and Dota2 way of thinking, with more than one of our games drifting up to the hour mark when the teams seemed evenly balanced, this combined with near identical core gameplay mechanics to these titles does start to make us wonder whether Paragon is going to struggle to pull these more “hardcore” players from their beloved titles off the third person mechanic and fancy graphics alone? 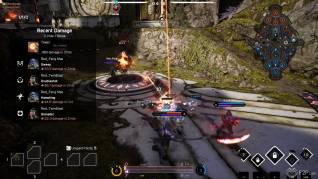 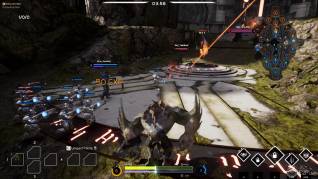 Other MOBA do seem to really be pushing more innovation with their games, whether Gigantic with its huge boss battles and insane game speed, Heroes of the Storm with its multiple maps/modes, Arena of Fate with timed matches where you score points to get an ultimate victory… Paragon doesn’t have anything new from what we can tell, and that’s disappointing. If as a MOBA player you fall into the “hardcore” camp or the “casual” camp based off how long you like your matches to be, Paragon is going up against the two biggest MOBA out there with very little under its belt to compete with them.

The game is pretty fun, the third person isn’t something to overlook and we do feel it’s a step beyond the likes of Smite, but behind Paladins and Gigantic, overall if it wasn’t for the graphics we feel that Paragon could definitely fall off into obscurity and due to that its future is uncertain for us and we’re not sure it’s going to live up to the hype.