Available maps too similar, too few skills for characters, point capture is too fast.

We got the chance to check out Paladins, the new first person shooter from Hi-Rez Studios (Tribes: Ascend, Smite) that is currently in closed beta; this was the first time we got to have a more extensive hands on playthrough of the game since we checked it out at GamesCom last August.

The game is a fast paced point capture focused shooter with currently nine player characters to choose from where each will battle it out on two different teams across different maps. There’s lots of comparisons with this being a MOBA meets Shooter MMO (even among our own staff!), personally in this reviewers opinion there’s absolutely nothing MOBA about it (at least in the traditional sense of what a MOBA is); it’s a shooter with a few different mechanics. We got to put a few hours into checking out the game and, well, we have a few thoughts.

As far as the actual base gameplay goes the game is really fun, it’s very fast and you feel like you are constantly in battle; low respawn times (but high enough to make a difference to the flow of battle) as well as the quick summons of mounts to get around the otherwise pretty large maps means there’s not much unnecessary walking and you rarely go 15 seconds without getting in a gun fight. This all trends towards much quicker matches that are generally fun and fulfilling, but have their own issues when combined with other factors (read on!) 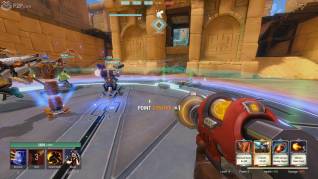 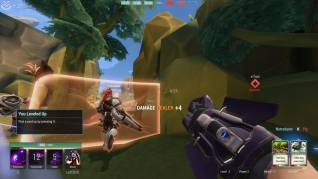 The different characters are well done and offer some nice flavour and differences in playstyle between them all, depending on your team pick in a standard 5v5 you can at least at this stage manage to avoid terribly bad team compositions. Each characters own unique abilities can generally be used in a variety of ways, the likes of Buck’s “Cataclysm” ability which throws up a huge stone wall is great for providing a temporary shield for your team when defending a point, but also great for separating off a few enemies from the group so your team can mow them down. For some Champions abilities are very situational and so not always useful, which is a problem when you only have 2 main abilities and 1 escape/movement ability (as standard for every Champion) so often you don’t feel like you’re doing all that much other than using your standard left mouse click attack.

Characters can be customized with Cards that are available for each specific character, in battle three random cards from your deck will appear each time you level up and you can choose which one you want to give you extra boosts and bonuses based on their rarity. This type of in game levelling is where we feel reviewers are making the link to MOBA style features, but levelling up in battle is no more MOBA than it is gaining talent points in an MMORPG. Cards are either collected from loot chests when you win a match, or you can craft them with a fairly simple system: collect three cards of the same rarity and you can combine them to get a random Unique card of the same rarity, or you can combined five cards of the same rarity to combine them into a chosen card of the next highest rarity. Simple and effective.

So onto the maps and modes; for our playtest it seemed like the Enchanted Forest was the only map currently in circulation to get some heavy testing and feedback on it, though thankfully we’d played Temple Ruins at GamesCom so we could make a comparison. Other than the theme/look the maps played very very similar; two team fortresses and three capture points that were also very similar between the two maps (enclosed in area with some buildings, a town like building with lots of levels, and an open “bowl” type area). Combined with the fact that it is the same objective for each mode: be the first team to capture a point, summon a siege cannon, escort it to the enemy base and blow your way through two doors into the vault. 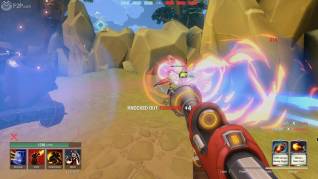 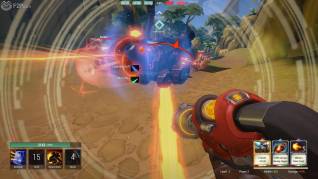 The fact that both maps were so similar was quite disappointing, even if the layout was slightly different there wasn’t anything so monumental that it made us stand up and go “Oh wow looks how different this map is”. Then there’s the whole point capture mechanic. On paper it’s not the worse mechanic at all, it’s actually pretty fun, but our issue is that personally it feels like the capture timer ticks up way too quickly (more so as it doesn’t tick down). The reason for this is that if you lose one or two people during the capture engagement or, more likely, you lose people right before the engagement en route to the fight (which happens about 20 seconds after the previously summoned Siege Cannon is destroyed) then you have pretty much lost the point. It takes a good 15 seconds from your spawn location to get back to the capture point as you watch the enemy capture gauge slowly fill up.

We’ve not played enough to know all the nuances about team composition, but it honestly felt like If you don’t have a heavy tank character who can soak some damage then it’s pretty much impossible to capture a point, you get on there and you will be pushed or deleted off it very quickly and if the enemy is on there the points tick up so quickly that it forces otherwise low health (but high damage) characters to be too aggressive because there’s not a chance that they alone can push an enemy team off the point (particularly as the tanks have a lot of defensive measures). The likelihood of having a tank is high whilst the available characters only sit at 9, but with more… we don’t think anything but a tank/heal heavy composition would work.

Overall the game is fun, the maps are decent, the characters work, but without a lot more content and some drastic changes to the maps and modes… we just don’t think as is the game is good enough and we simply hope it’s nowhere near release. It genuinely needs more of everything if it’s going to keep players engaged for any long period of time, at least for us, and if it does manage to do that then it’s going to be a great title. 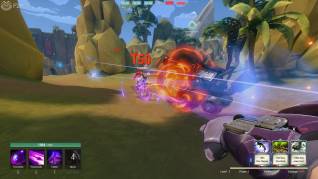 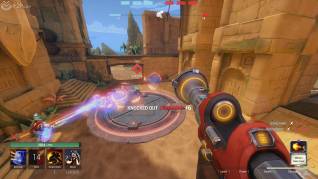