Some okay boss mechanics, convenient browser gameplay, will be free when released.

This weekend we spent some time trying out the third closed beta of Abyss: Dark Arisen from NGames. It’s an Asian free to play RPG that can be played through web browser and we took out a few hours to check the game for ourselves. Being launched in the west we’re always intrigued (with a little bit of trepidation) when testing these Asian RPGs to see how they play out, so many of them are identical to each other that the names honestly become meaningless after a while because there is very little between them. Would Abyss: Dark Arisen be any different?

Starting out things didn’t look too promising, the standard three available player classes saw us with a choice of Warrior, Mage or Priest, a typical trinity that doesn’t do much for the imagination, further added to the fact that (as we found out later) there’s very little customization and players only get 4 skills to use per character. If you’re only going to have 3 different classes then at least give players enough to make the characters different to one another.

We picked up the Mage, a long range caster who we managed to absolutely tear our way through the initial opening dungeon with, one shotting everything in our path until we came to the first boss, an Ice Dragon, that we were way too low to fight and so as per the story got our assess handed to us and were told to run by our NPC master. An odd quirk of the translation we found was that he kept calling us “My Kid”, which we can only presume was a bad translation meaning the same as “My Son” or “My Child” perhaps, but this was far from the worst of the bad English translation (again, not wholly unexpected). 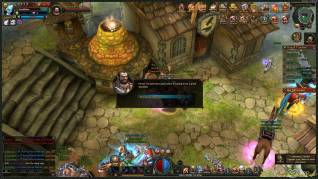 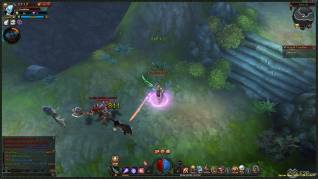 Beyond the tutorial combat typically took place in the Solo Dungeons, staged levels within each region where you had to progress through them in order to advance through the zone. Our first region was the Boneyard which for some reason was a mine theme, though there were a couple of skeletons around to be fair. Here we thought things would start to get a little more challenging, but we were way off. Everything was still killable with one hit, even worse we picked up an AoE so we could one hit kill entire groups that we came across, not that there was a rush to kill anything as stood within a group of mobs all attacking us we never went below 90% health. Zero challenge.

The lack of challenge and mediocre combat (with unintuitive aiming that couldn’t make its mind up whether it would aim towards your mouse or towards the closest target) was only part of the problem, the level designs for each dungeon were a linear one way path, clumps of mobs en route to the finish line and culminating in a boss fight filled with an entire room of enemies. Again, not a problem, we could clear the entire room with one AoE and then a few shots later the “Boss” was dead. The linear dungeon and lack of challenge made our first Solo Dungeon a bit of a bore, around ten minutes of grinding through the stage. Then we got to hand in the quest and play stage 2…. Which was nearly identical to the first, rinse and repeat a further eight times with 10 stages per region and by the end of the zone we were pretty bored of the game. The final boss (our Ice Dragon) was a little more interesting and had a mechanic where he would freeze us in an ice block and we’d have to repeatedly tap space bar to break out, aside from that he could be killed in a few hits as well *yawn*. Happy to clear the region for a bit of a change of pace, we were met with heartbreak as the Solo Dungeons in the next zone, the Dark Jungle, was identical in style and layout to the previous zones but just had different graphics… we had no desire to grind through another hour of the same level. 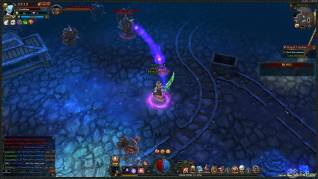 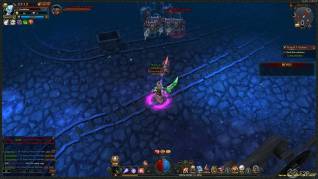 The progress of the game is story-driven and level focused, by levelling up you access the next stage, which gives you the next part of the story, the quest givers themselves are all in the main town (the place where you click a portal to access all the region Solo Dungeons that you are supposed to be traveling to I guess). The repetitive nature was felt here to, it was the same “get the quest to go into the next area > Complete the stage > hand in the quest for XP and Gold > get the quest to go into the next area” rinse and repeat. For the first 2 hours of gameplay it literally felt like we had one quest and one level that we had to complete over and over, ludicrously one quest actually DID task us with having to complete the same level multiple times to get some sort of Ore from completing it; thankfully we had the “Blitz” option to spend out Stamina to auto-complete the level a few times.

Earning XP was easy enough and gold seemed to come quite often, more from completing quests than actually playing through the stages (which makes sense as they are repeatable), and was typically spent on Enhancing our gear. Gear was dropped in the Dungeons and would have you auto-equip it if it was better than what you were wearing, each item piece could be Enhanced so many times depending on the gear slot if was placed into, each Enhancement cost money based off the rarity/quality of the item. The prices were reasonable at first, with around 10 or so items we were able to keep them all upgraded (some requiring 5 Enhancements and some even having 10). Once we picked up better gear it was clear that our income of gold vs how much it was costing to enhance items was not going to keep up and it makes us think players will be constantly behind the curve power wise without paying some real cash to “Recharge” so they can refresh their stamina and complete some of the other features that gave the best rewards, but used a portion of Stamina each time. 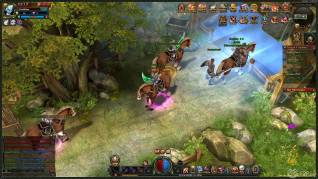 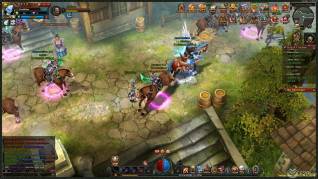 One such feature was the Multiplayer Dungeon, once we clicked to join it we were transported to a Tavern where players could try to recruit from a group by clicking a button, which gave an invite to the chat channel, or join someone else’s group. We joined someone else’s group and then ended up sitting there for a few minutes as they clearly didn’t know what to do. We ended up quitting and just going solo into the Dungeon, though it recommended three players, it was just as easy to kill our way through as the Solo Dungeons at this stage and we managed to pick up some purple items... woo hoo (they cost a lot to Enhance).

If it isn’t apparent already then let us clear things up, Abyss: Dark Arisen is a pretty tedious game, the same content over and over that seems to be geared towards having boring grindy early content and focuses on players unlocking better features as they level up. The game is seemingly skewed towards making people want to pay if they want to be competitive, but honestly we don’t see the game having much appeal to a western market due to the bad translations and generic Asian RPG content. The game is obviously a little popular as there were lots of people filling up the town, which absolutely nailed the games performance making it sluggish and laggy. All in all not a great experience.

If you want to know more about this game, check out our profile by clicking on the "info" button.