Limited to only three classes currently, some of the dialogue is a little short and at times pointless

The guys over at Hex Entertainment have just launched their long awaited PVE campaign for their trading card game HEX: Shards of Fate, a free to play TCG MMO with some extremely interesting concepts and features, their new PVE campaign being the latest addition. Stepping into the game and into the campaign we were prompted to make our character, right now we can choose from three classes; Warrior, Cleric and Mage, available in all eight races from the two main factions, players can expect to see the Warlock, Rogue and Ranger down the line though. Each class has its own abilities, much like an MMORPG, which define things like bonuses, extra hitpoints, what their ability trait does (which is charged up each time you spend a resource card) and other stuff.

We went with a Shin’hare Cleric, the Shin’hare are essentially feudal Japanese style rabbits, whose ranks are made up by samurai and ninjas; they fall into the “Underworld” faction (shared with other subterranean races), which initially might seem like the “evil” faction, but the reality is that as with many things in the games’ lore the traditional and expected have been turned on their head, where even Orcs and Elves are allies, taking a big step away from fantasy tradition. Our Cleric had a “Bless” trait where, after each two resources spent, we could use the hero feature to add a Blessing card into our deck, which would be a free spend and allow us to heal ourselves if we drew it into our hand. 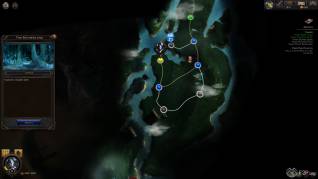 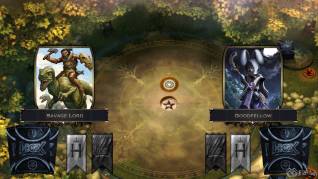 The PVE Campaign was very story driven, throwing us right in the middle of the plotline revolving around the fallen Hex shards, the different NPCs that we spoke to were filled with character, ranging from a stoic drill sergeant, a very zen like enemy coyotle shaman and a weird troll like fortune teller we met on the road. Our first mission was to try and reach and recover a piece of Hex that our spies had found in a nearby castle ruins, accepting the quest from the main Shin’hare city where we could speak to different NPC quest givers, it took us out onto a Dungeon map for the ruins’ location.

The actual map of the area was a large illustrated map of the vicinity that could be travelled around from different connected nodes, each node being some form of story moment or an actual encounter battle. For the ruins we had to fight through different nodes making our way into the castles main area, fight across the drawbridge, through the courtyard until we came to the Dungeon Boss (our zen-like coyotle shaman). Here’s where we came to our first problem. Our first few battles were fairly breezy, but the Boss was really good at stacking up his units and making them very difficult to take down, especially against our faction whose main fighting style is to “breed” tons of low defense/0 attack “Battle Hopper” bunnies that we can then build up. It took us four attempts to defeat the boss simply because we had to get pretty much the perfect balance of resource cards and troop/action cards, getting stacked a little too much either way meant we couldn’t field enough units to deal with the enemy quick enough before we were defeated. 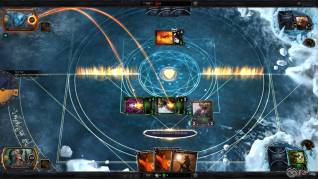 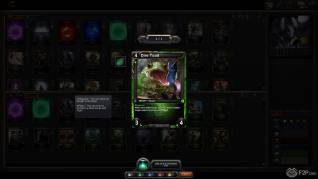 Defeat didn’t mean much, other than wasted time, as we could re-challenge the enemy over and over, but this is only because it was the first training dungeon, in later dungeons players get three lives to complete the entire dungeon (excluding the first defeat in a battle) and if they lose all three lives then they have to start the entire dungeon again and advance through all the nodes. Our annoyance was that we couldn’t seemingly edit our deck, we had been given a set of cards and had to wait for perfect conditions to defeat the encounter, something we have had serious problems with in previous TCGs such as Magic Duels. Fortunately, once we had completed the dungeon and levelled up, we got access to the full deck editor that was filled with 200 free cards for our faction, so we had a huge amount of customization to try and advance through the campaign.

A second concern that was quickly laid to rest was the linear fashion of the nodes on the map, worried that it was going to be a fairly straightforward progression, with every player having essentially the same adventure. We were pleasantly surprised that this was not the case as we were introduced to the Adventure Map, a huge overland map of the world that we were essentially given free rein to explore, where reach a node could unlock multiple new nodes (all of which were invisible until you unlocked it, so you didn’t know where it might lead) into a huge network of nodes that we could choose our own route on. The nodes lead to new locations, one off battles, short story encounters, or large instanced Dungeon Locations, which became more sprawling maps of their own with multiple routes to the Boss. 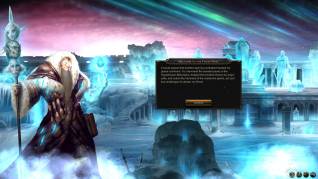 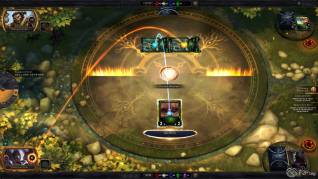 The journey was filled with encounters, not just combat, we came across a travelling fortune teller who, for 100 gold (we actually had to pay him from our earned cash) gave us our fortune, some random chat about the enemies we would face soon as well as a drawn random card that would give us a random health threshold in our next battle. We also acquired a taming ball that we could use to tame animal cards with the “Untamed” keyword, much in the way of catching them with a Pokéball we had to build up resources in a match to use the ability and catch them, thereby adding that card to our available deck! We earned prizes, cards, currency and XP as we travelled, including some Rare cards and socketable cards where you can equip gear. Each time we levelled up in the campaign we also got a talent point to spend in the huge talent tree, which gave us access to new perks, cards, or boosted our traits.

Whilst only at the beginning of the campaign we have to say that the inclusion of the open Adventure map, with multiple routes to explore, the developers have really done a remarkable job of bringing a true PVE exploration experience to a TCG format. The different facets and nuances really bring a strong element of RPG to the game and once more have shown us how the innovation coming from the Hex Entertainment studio is really helping to redefine what people should want and expect from their online card games. 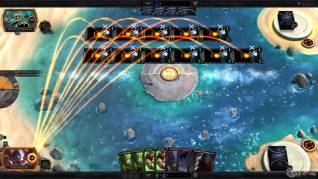 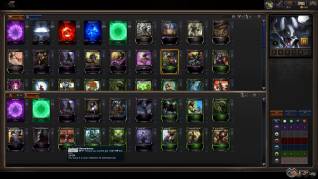