Quests that update automatically when completed, class changing from the menu, decent graphics

Gameplay is a bit old fashioned, questing is tedious, has no features a modern MMORPG needs yet

We got access to the pre-Beta of Artix Entertainment’s new MMORPG AdventureQuest 3D, a rebooted version of their original flash browser game. The game is still heavily under development with most of the final features still missing, for our test we had access to the first three zones and a level 12 cap, the early game content being what was mainly playable.

When we logged into the game the first time we had a level 5 character already made for us, initially we were a bit concerned that we appeared to be a Warrior class as we’d been told we were getting some stuff put onto the character by the developers, which meant that we couldn’t delete the character and as there wasn’t more than one character slot we wouldn’t be able to check out the other classes. Or so we thought. The neat thing with AQ3D is the ability to switch your class right from the menu, with the push of a button we could change into a Warrior, Rogue, Mage or Guardian, each of which had four primary mana using skills and a fifth basic attack.

The classes were fairly standard as were the abilities they had accessible; our biggest issue is the complete lack of customization between classes; there’s no deviation, no talent system to change them up, currently everyone has exactly the same skills as everyone else and given everything else that needs adding into the game we can’t see this changing in the near future. The UI itself is good, big, bulky buttons in the bottom right allow you to use number keys or mouse clicks, but it’s plain to see the entire GUI has been built with tablets and mobiles in mind. 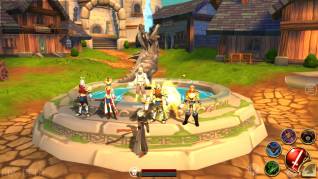 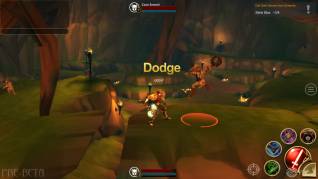 That is one of the big perks about the game, and something Artix Entertainment love to push front and centre in their list of features: cross-platform compatibility. Whether you’re a PC or Mac user, accessing through web browser, or joining the game on your tablet or phone, you will be able to meet up with everyone in the same world and play together no matter where you are. It’s a pretty cool feature for an MMORPG, but we wonder how much has to be sacrificed in order to bring on board the mobile crowd (graphics, combat complexity) which puts AQ3D a little more into the “casual” bracket for us.

The starting area of Battleon was a pretty open town and the fountain the main gathering spot for players, though was far from the hustle and bustle of other MMO hubs. There were a lot of placeholder buildings in the town that had signs for various shops and places, but we couldn’t enter all of them; those we could enter would load up a new instance of the area, but it was difficult to work out which buildings we could and couldn’t visit (no visual indicator, no open doors, no mini-map).

Grabbing a few quests we were directed to go to a cave complex, unsure of where it was (as there’s no map) we did find an insta-travel feature in our menu to go to any of the three zones that were currently playable. We’re pretty sure this might just be a pre-beta feature or something on our account specifically, but it did allow us to jump to the quest location. Inside we found a Trolloc Warlord who tasked us with going killing some other Trollocs, this required us fighting through various mobs at the entrance and working our way deeper. We found two Trollocs and killed them, and they respawned pretty quickly allowing us to complete the quest, when we did we could claim the rewards there and then and the quest itself updated to the next quest, which we really liked and made it so we didn’t have to go back and forth to the quest giver. 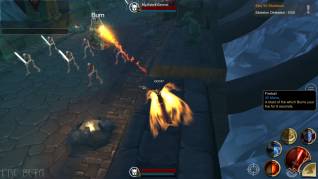 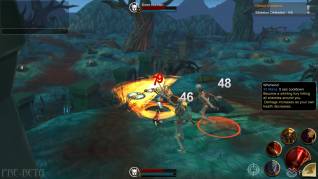 However, we weren’t spared going back and forth altogether.

After killing these Trollocs we were then tasked with destroying crates in a Trolloc camp, which obviously was filled with Trollocs, meaning we had to fight and kill more. In other MMORPGs this would have just been two quests that could have been completed at the same time, instead if felt like a waste of time and effort. Our quest updated and we had to go back to kill some of the mobs at the beginning of the cave, so the questing lacked the natural progression from the beginning of the area to the end. Worst still after completing two more kill quests we then had to collect yellow and red leather, which was a random loot drop from….. yes… Trollocs. The whole experience was quite tiring, frustrating and grindy and we were a bit disappointed.

Doing a few more quests and having a look around the world design wasn’t too bad, but a huge pet peeve of ours is seemingly open areas with paths leading to somewhere that are blocked with invisible walls to signify the border of the zone. There’s far better ways to do this and more aesthetically pleasing ways than invisible walls. We logged out of the game and when we returned later we found our character had been upgraded to level 12 and now had a full suit of level 12 Knight Alpha II armor (which was pretty good) a Soulborne Axe and some fiery wings (which were purely cosmetic). Heading to the town of Battleon was quite fun as there were the usual preening players stood on the fountain showing off their high level armor and items they’d earned or bought with their Kickstarter donations. Then we turned up with our fiery wings and we were like a rockstar (as far as we’re aware the wings aren’t in the game yet). We had good fun with a few people making up fake quests on how we’d attained the wings; truth is we’ve no idea. 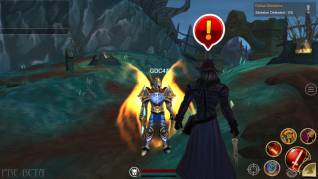 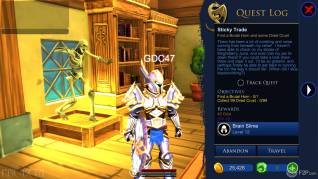 As we were now level 12 we headed to the end zone, a shadowy area known as Doomwood filled with all types of undead. We were pretty much able to kill anything apart from the two end of zone bosses; the Gate Wraith (level 12) and the final boss of the zone General Gathmor (level 15); we gave it a try but absolutely got our asses handed to us and it definitely takes a group of players to bring them down.

Overall what was on show was decent enough for a casual MMORPG, the core mechanics lending themselves to mobile devices mean it’s unlikely to be a complex title. Gameplay wise there was nothing to do other than complete the quest chain then grind end level bad guys to try and get enough gold for high level equipment (at least that’s what players were doing that we spoke to, or playing games of Hide and Seek with each other in different zones). It is hard to judge how the final product is going to be as it is so far away from being complete, it lacks so many features we’ve come to expect of an MMORPG these days: Crafting, PVP, Housing, Mounts, Pets, Skill/Talent Customization, Maps, Friends List, that we’re not sure how long it’s going to take to implement all these things. 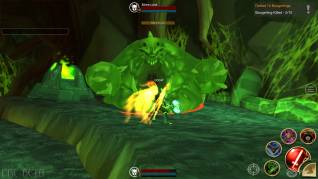 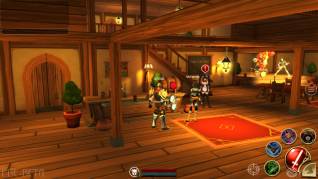