New mechanics, wide selection of cards to choose from

Terribly designed interface and website, lots of time out issues, no obvious way to progress past the tutorial and get cards to play other players

We recently checked out the new trading card game from Iron Belt Studios, Battle For Gea, a free to play fantasy-based browser MMO currently in public beta. With many other TCGs on the market we were interested to check out this new game and see how it would hold up against the competition and see what new features it may have in store. As with many TCGs it retains many of the classic features such as collecting cards, managing decks, PvE campaigns against AI opponents and a shop to purchase Booster Packs using the in game or real-world currency.

Registration was simple enough, creating an account on their website allowed is to instantly log into the game for the open beta and start playing through the tutorial/campaign mode. The game is fully browser integrated , though the listed features from the publisher mention word of a client download for Windows, though we couldn’t find this on the website, as well is an app, so one of the things you would expect is a well-structured website that can complement the game. Involved in this wasn’t the case, minimising the browser window smaller than the game frame create some terrible clipping issues and elements that covering each other, having buttons and generally making a bit of a mess. Once we got into the actual game the actual size was an odds ratio, playing at a 1920x1080 resolution there was a lot of blank space below the game frame and it didn’t seem particularly well designed for a classic 1920x1080 ratio, so much so that we actually had to zoom in our browser so that we could read any text on the game cards.

The game has a padded out lore and players will uncover the background and story arc through the various stages of the tutorial campaign with fully illustrated and text narrative story frames. The studio is from Spain, which was pretty obvious given that the top ranked players (if they weren’t actual developers) were also from Spain, which almost never happens in any game. Similarly the translations into English were just off, a mix of bad spelling, bad grammar and some translations just didn’t make sense. 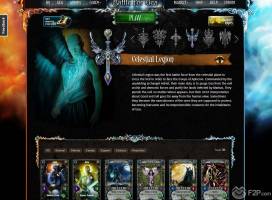 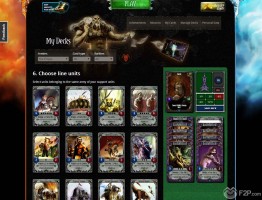 So that was the first impression, but what about the game? Well graphically it didn’t look particularly breathtaking, the illustrations for the cards were an odd mix of styles ranging from digital art, hand drawn illustrations and graphically 3-D rendered images and whilst individually they looked fine it just lacks consistent in style.

The actual mechanics weren’t terribly difficult to pick up, for the tutorial we were given cards that were already laid out on the battlefield, four in total with three on your front line and one on the backline; typically cards can only attack those are in front of them with the exception of the backline unit card that can defend and attack from any other card (though you don’t get to choose which card you are attacking, it is up to your opponent to choose which card they want to use to defend). Cards have their own Strength rating and Damage value, when you make an attack both the attacking and defending cards go head-to-head and whoever has the highest Strength rating wins the dual and they deal their damage directly to the enemy General ‘s Morale Pool (once this hits zero the General/Player is defeated).

The strength of a Unit is modified in various ways, primarily from the Unit cards own abilities that can give them bonuses on their Strength against certain unit types for under certain conditions
as well as abilities from the players General card and their Support card. Primarily players will use Command Points, also from the Generals pool, which we had 9 of and could apply one or more to each card during a duel; every Command Point applied would multiply the Units strength. With no idea how many Command Points the opponent player is going to use during their attack creates a fine line between weighing up the tactics and complete guesswork, to use tactics players are almost forced to do quite long winded maths to work out the best odds as to how many command points they should apply to each unit.

Some of the abilities that cards have didn’t make sense, bought this is no doubt something that players will pick up after a while, and sometimes we found that where we thought we were going to be getting bonuses we didn’t, so it wasn’t completely obvious at times.

For our experience the tutorial mode ended abruptly as our fifth and final match against the AI kept bugging out, in our video it seemed to crash and trying again afterwards we still didn’t have much luck even after logging out and logging back on again, showing that there are still quite a few problems. Our further exploration into the features also came up short, trying to play against other players we were told we didn’t have a General card to make a new deck, checking out the Shop to see if we could purchase a Deck pack and our and currency from the tutorial and fruit was we have lots of Silver Coins practically everything that you will want requires Ingots (in fact we couldn’t see where we would actually spend Silver Coins). To add to all the problems we visiting the site later gave us a “There were too many redirects” error from Google… not a great thing to happen for your Browser based game.

All in all the game feel nowhere near finished or polished, with a number of glaring issues that mostly fall around the poorly built web design. Whilst on one hand you can say the game is in Public Beta, which is a more than reasonable excuse, unfortunately players these days see Public Beta as a “chance to play the game early” and expect so much more from games. Public Beta should be a stress test to ensure the game can handle the users and get some wider feedback, but the game should at least be much closer to a release state than Battle for Gea is and the major issues are something that anyone playing the game can see even before entering Public Beta phase.

Not a great first impression, but aside from all that the game was somewhat enjoyable and with some of the major issues fixed it could be one to come back to.

Very soon we'll publish a first look gameplay commentary video, so stay tuned if you wish to know more about this new title.