Exceptional graphics thanks to the CryEngine, high levels of customization

Too many snow maps, same objective for each battle, very similar gameplay to other tank shooters

Just recently Armored Warfare, the future free to play modern tank shooter from Obsidian Entertainment and published by My.com, went into early access closed beta and we got the chance to check out the game for ourselves. The game will enter the ranks alongside War Thunder and World of Tanks, two already extremely successful MMOs and so we were curious as to whether Armored Warfare had the fire power to make any dents in these two titles.

First things first is that the game is being developed on the CryEngine, just logging into the game and you could instantly tell the level of detail was pretty formidable, something that was only further displayed as we switched across maps, from urban sprawl, snowy industrial complexes to desert facilities. Whilst still being tweaked in places, as is the entire game, we were extremely impressed with how beautiful the game looked, combined with a sleek and clutter free UI we had all the information on our ammo, map position, vehicle damage indicator and more. 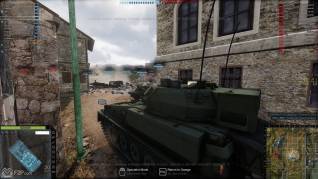 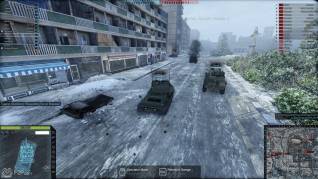 Having not played many tank shooters to any great extent the lack of tutorial was a momentary concern, but in all honesty the clear explanations for each features and detailed descriptions on gear made navigating the game pretty easy. Giving a cursory glance over the initial Garage features where our two initial tanks were located, the M113 and PT-76 light tanks/recon, there’s plenty of ways to customize your vehicle including your Commander giving you a choice of instant buffs such as an extra 10% speed, armor reload or vision range as the initial three that are available. In the same vein are the Crew choices, with 4 slots to fill they have similar effects as Commanders but can be further retrained to customize their perks individually. Throw in different types of Ammo, consumables such as repair kits and an already pretty long list of tanks and it was clear that the choices and customizability was already off to a good start. At this stage though we lacked the in game funds to be able to do much so we jumped straight into a PVP battle.

So into combat, well for a closed beta the queue times actually weren’t too bad, we logged in shortly after the servers went up and they’d already drawn in a few thousand players, so thankfully the loading times weren’t particularly bad and ranged at around the 1 – 2 minute mark (though this isn’t always the case and sometimes players can queue for upwards of 10 minutes, though it in no way reflects the final release population). 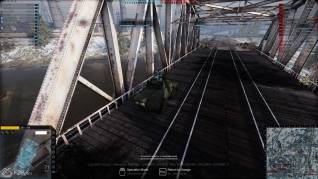 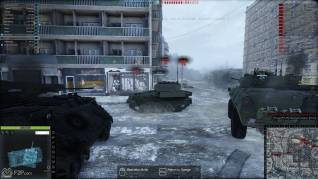 For our first few games we simply tried to weigh up just exactly what we should/could do, sticking with the main vanguard more to see how they would do things and not make ourselves a lone target to be picked off. From time to time we’d get a little too adventurous and push forward, which would pretty much always end up with us facing the barrel end of a Tank Destroyer and needless to say with our Light Tanks we rarely got the indicator to show where we were being attacked from and were just met with an explosion. Already some players are pretty skilled and at decent levels to have some good vehicles, we always found it quite difficult to judge where an enemy was when their red target popped up on our screen, flagging them up miles away it wasn’t until we saw them rolling by that we felt comfortable enough to take a shot, but other players just seem to be sniping enemies pretty successfully from miles away.

The city map was probably our favourite to play, particularly as our more mobile M113 (whereas the PT-76 was slower but had better armor), we were able to zip down streets, cutting up side streets to outmanoeuvre our opponents, scouting them out to flag them for our other team mates. With destructible environments rolling through streetlights, wall and cars was fun; though the graphics make them just explode into pieces of debris as opposed to more realistic physics, which is a shame when you compare it to the other environmental effects like dust clouds, water effects, smoke, etc. 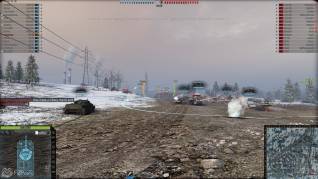 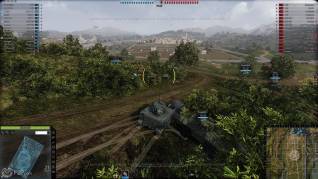 We died quite a lot, but every cloud has a silver lining, and we were able to switch between team tanks in the spectator mode (or skip back into the garage to jump into another game whilst our current tank was busy). Watching people play shows a much greater level of patience and thought, the top players on our team knew when to hold back and when to go in guns blazing, though very often tank battles ended up being two tanks circling right next to each other, or ploughing into each other head to head and trying to outgun one another.

Right now the game modes only focus on base capturing objectives, with a secondary win objective by destroying all the enemy team, which is fine but isn’t always the most interesting as both team are making a beeline to the same place every time; personally we’d like some sub-objectives that can tip a map in a teams’ favour before pushing the primary objective… maybe it will come, but we doubt it. What will be coming is PVE single player campaigns and team coops, something that Armored Warfare’s main competitor World of Tanks is lacking in favour of a multiplayer competitive PVP experience.

Graphics and potential future PVE content are unfortunately the main differences between Armored Warfare and WoT, in reality both games play very very similar to each other and the features aren’t a whole lot different. Imitating the primary competition isn’t something new in the MMO world though (just ask League of Legends and World of Warcraft), but we would have loved to see something a little different instead of “this is what WoT would be with better graphics”, which is how it felt, but perhaps for many that’s all they really want? Overall the game was enjoyable to play, but it feels like Obsidian have been a little reserved with the innovation and instead focused on bringing a title with an already working formula, the fact that Armored Warfare has a modern setting does open up other technologies (future-tech?), ideas and possibilities, but it will depend on just how different Obsidian want to be. 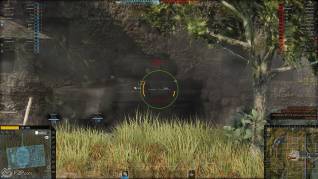 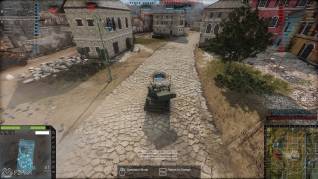