League of Legends: The Good & The Bad

League of Legends: The Good & The Bad

A free to play MOBA and the biggest title in the genre, League of Legends sees players battle it out in team based battles pushing waves of minions to try and destroy the enemies Nexus. As the most popular MOBA in the world it’s hard to deny that there’s a lot that is great about League of Legends, but as more contenders appear what sort of negatives does it highlight in this popular title?

Lots of Players - With over 30 million unique players joining the game each month, there are currently over 100 MILLION players each month playing the game; that's as though EVERYONE in North Korea, South Korea and Australia were playing the game...

136 Champions -There are 136 playable characters in the game, with new characters added every few weeks. Each Champion fills different roles to suit different play styles, and so there is undoubtedly something there for everyone

Masteries and Runes - With these two different systems players are able to augment and enhance their preferred champions increasing their abilities prior to a battle, giving them various new upgrades to customize how a hero works with their play style

Diverse Item Choice - Similar to Masteries and Runes, Items are used to customize a hero, but are bought during each match using gold earned through the battle to customize a Champion just for that match depending upon their team's composition and their opponent; with hundreds of items available there are near endless ways to customize a character and change them

Rewarding eSports Scene - Consistently the most viewed game on Twitch with hundreds of players streaming their battles, the 2016 World Championship pulled in a prize pool of $5,070,000 (albeit only a quarter of what DOTA2 had that year), making a lucrative eSports scene

Toxicity - Every gaming community has an element of elitism and toxicity, but the game seems to be extremely volatile with a high number of toxic players cursing players out in game and trying to bring them down

One "Main" Map - With a variety of other MOBA available and them introducing a variety of maps to play, it can get a little tedious playing the same "Summoner's Rift" map in League of Legends and every battle objective essentially being the same

Surrender System - Players are able to surrender a game, if enough players in a team Surrender then the game is over; the problem is that so many players are quick to surrender after one or two misplays so that games feel like a complete waste of time as there is either no comeback mechanics or players are only happy if they are dominating from the first minutes

Extremely Long Match Times - It's not uncommon for a single game to last 45+ minutes, this not only means that it is hard for players with only a little time to play to commit to a game, but also you can spend 45+ mins on a single match that you might lose... which doesn't feel good...

Champion Expectations - More so than other MOBA, due to the primary game mode and map always being the same, certain Champions are expected to do a specific task and in a specific way; deviating away from generally brings on a lot of hostility from teammates who have specific expectations on what you should be doing 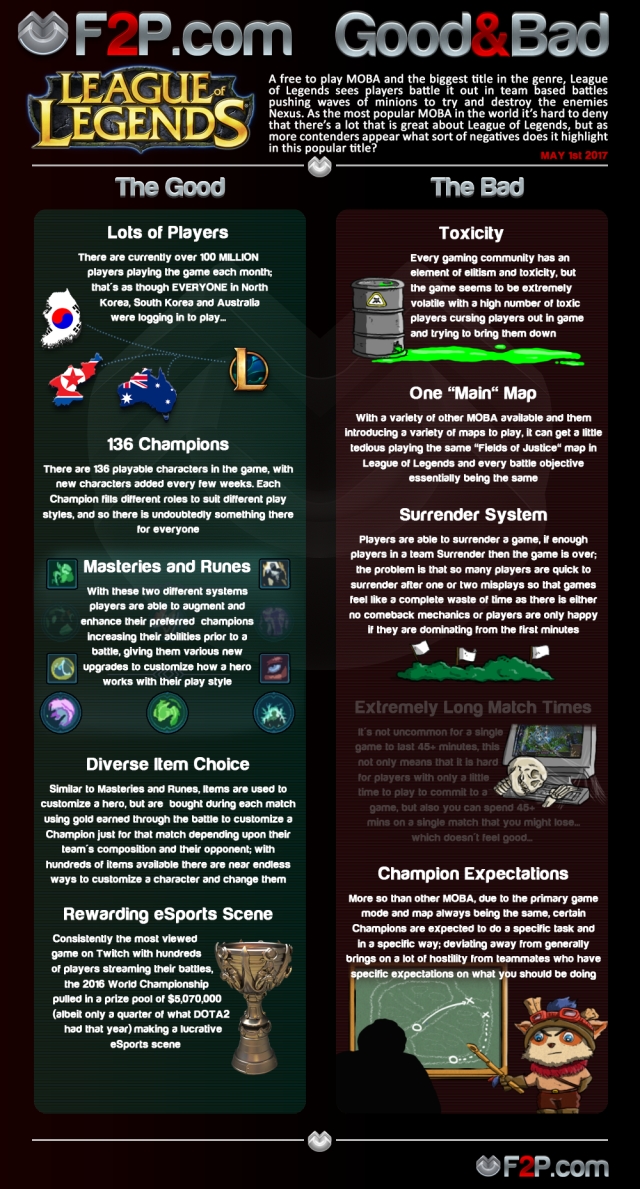 **NOTE: The name of the "main" map is wrong. It's called Summoner's Rift.League of Legends: The Good & The Bad