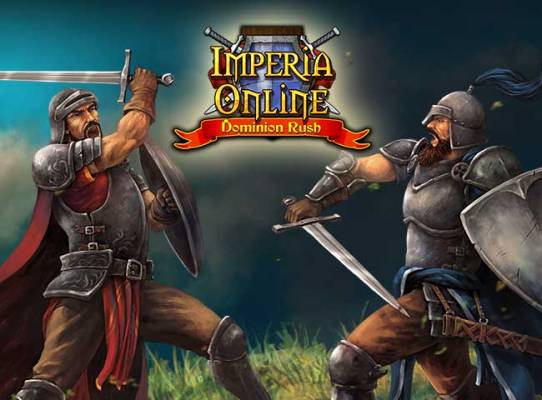 Only accounts at level 20 or more are eligible to participate. This does not apply for version 5 accounts, for they have no levels. To register an account from version 5, it has to have more than 500 points and its registration must have been made more than one week before the tournament registrations. Imperia Online employees are barred from participation.

The Time Has Come for New Territories to be Conquered!

You have asked for it and now it is here!

Are you ready to conquer castles and hold them off as much as you can... again?

The Dominions are here and they are ready to be rushed! But beware, Dominion Rush is arguably one of the most trying tournaments we organize.

The rules are draconian, strategic alliances are crucial and tactics are decisive. Your spirit, perseverance, wits, and courage are to be tested in unfathomable ways.

Will you join the epic territorial tournament?

Rules of the tournament

- All players start with 1 million of each resource and bonus items.

- Alliances are limited to maximum 10 members.

- The occupation of an alliance castle is going to happen through a new module – allegiance. Successful fortress sieges against an alliance castle will not drop levels from its fortress but will rather take away points from the new indicator allegiance. Each castle will have a maximum allowed allegiance according to the level of its fortress. The only way to increase allegiance is through time – 2 points are recovered every 12 minutes until the maximum is reached. When an alliance conducts a successful fortress siege against a castle a certain amount of allegiance will be taken from the castle. The exact amount of allegiance taken will depend on a new alliance technology – conqueror. The higher its level the more allegiance points can be taken in a single hit. A castle is considered taken when an alliance manages to reduce its allegiance to 0. This new technology will have a second type of effect – it determine the starting allegiance of a newly taken castle – be it independent or conquered from other alliance. The independent castles don’t have allegiance, an independent castle is conquered when less than 1000 military units are left in it.

- In order to conquer a castle, which is already occupied by a rival alliance, you should have at least 1 level of Conqueror researched.

- Castles controlled by alliances will be subjected to ascending by level nomad attacks every 2 hours. Each defended attack will give Defensive points. The castles can be simultaneously attacked by other alliances as well.

- Each subsequent nomad attack will be of higher level and more powerful than the previous, but it will also give more Defensive points. Each nomad attack is visible to all players in the realm. Losing a nomad attack also brings an automatic loss of the castle.

- Defensive points are accumulated inside of every castle.

- Accummulated defensive points are added to the total score of the alliance only in case a nomad attack is lost.

- If a castle is conqured by another alliance, this alliance also acquires all defensive points accumulated in the castle. The castle is protected from attacks from other alliances for 30 minutes after conquering but is not protected against nomads.

- The new owner of the castle continues its defense against nomad attacks from the level which the previous owner reached.

- If a nomad attack is lost then the castle becomes independent and can’t be attacked by alliances for 2 hours.

- After the independent castle is retaken by any alliance, the nomad attacks against it start from the lowest level.

- Nomad attacks will not grant gold from supply train.

- Nomad attacks will grow in strength by 5% each day.

- For each castle an alliance owns the nomad attacks against it will grow in strength by 5%.

- The limit for deployed army in an alliance holding is increased to 500 million soldiers.

- The price and building time of Great temple are reduced 4 times.

- The positive and negative effects for accounts under castle influence are increased 4 times.

- No tournaments will be available.