Hi-Rez Studios (developers of Smite) announced their new first person Team Shooter Paladins last week and we were delighted to see the game on display on the show floor at Gamescom this year, and with our press meeting with them we got to jump the queue and play a game ourselves. Sat down at a table of ten we were playing with other members of the crowd, who weren’t all so fortunate to have press access so had to queue for a loooong time, for those that did though I’m sure they’ll agree the game was well worth it.

Paladins is most definitely a shooter game with level based talent progression, before heading into the battle players get to customize their own deck of cards that as they level up through the game by getting kills/XP/unlocking objectives they get to choose between a strength, utility or defense card and customize their character throughout. This is definitely a feature we’re seeing more of in the MOBA genre (not that the team are calling themselves a MOBA, but everyone else seems to be making some vague connection), particularly with Heroes of the Storm, the new Gigantic (a self-titled third person MOBA shooter) and now Paladins; though Heroes of the Storm is the only one that’s really a MOBA.

Stepping into the game we were on a huge open map that had a desert meets tropical island feel, starting in our own base we were locked into one of the available characters; a fast little squirrel type character that shot ranged explosions and could heal or use a skill to increase my speed (oddly the character felt very similar to the character I’d played in Gigantic). Accompanying me on the team were a Spartan/Legionnaire type hero who could summon a huge forcefield for everyone to take cover behind, a Native American Indian meets orc that used a staff that fired off lasers like a machine gun (pretty awesome), a robot that could fly through the air for some time and a couple of others; quite the motley crew. 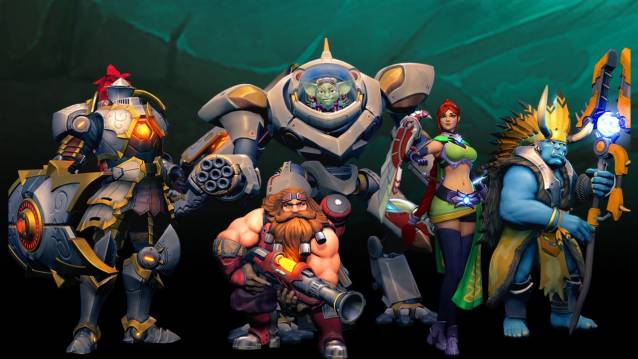 The loading screen informed us that the objective was to gain access to the enemy vault, located within their base, we’d have to blow the doors off to win the game; presumably you could do this by just attacking the vault directly, however there was a little extra help at hand. On flanking sides of the map were two control capture points, one was situated in a town with different buildings, ledges and had lots of cover and corridors to fight in, the other was an open area in a bowl like valley with cover all around the outside of the bowl. The town area was a lot more tactical, players fighting around the rooftops as much as in the open town square where the point was capture, whereas the bowl was an endurance battle, whoever was in the middle on the point was very much in the open and at the mercy of the attacking team.

The objective was to stand on the control point until it reaches 100, fighting your opponent off the point and taking control means your own teams ticker starts going up, but the other team don’t lose their progress so as not to make it a potentially endless battle back and forth. Once you reach 100 then your team spawns a huge mobile canon at the point that automatically starts rolling towards the enemy base, a huge fortress, shooting down the gates and ultimately heading towards the vault. The objective is to defend the cannon and provide some additional firepower.

The game is pretty intense and combat is fairly constant, each time you die you respawn in your home base, but with the handy mounts that you can quickly summon then getting back to the battle isn’t too difficult, but long enough where dying can seriously hinder the team. The environments were pretty cool and the two different point captures really provided a different style of combat with different strategies needed for both (we lacked them for either as we were a random group thrown together). Thankfully our team was more the cautiously aggressive type, identifying when we had a good chance to push, but smart enough to pull back when needed and not just suicide against the enemy, and ultimately it resulted in us winning the game in spite of the enemy team getting the first two cannons, our strong defense escorting the cannon really helped us seal the victory.

The game is only currently in Alpha, but even for early access what we saw and played both looked and played great; with additional maps and the easy implementation of different modes, we think Paladins is going to be a really fun and competitive game. There’s a definite Team Fortress 2 style to the game, both in look, design and humour, which isn’t necessarily a bad thing and these days who really cares as long as the game is good? Keep your eyes open for Paladins, the developers are aiming for a 2016 release to PC and consoles.