While we got the chance to preview Smite, the newest game from Hi-Rez Studios, we were able to take a few minutes to have a sit down with Bart Koenigsberg, Marketing Specialist for Hi-Rez, and take a look at what's new in one of their other current games; Tribes: Ascend.

First off was the reveal of a new game mode called “Blitz” that would be the newest mode put into game since release. Essentially this is to be your typical capture the flag but with a twist, each time an enemy flag is taken and returned to your base the flags respawn point changes to another area on the map; an interesting development for those in the Tribes community who have raised concerns with the higher scoring gained from being purely defensive. The game mode should be fast and fun (though we should say faster given the breakneck speed players fly around the map in Tribes) and forcing players to switch between both defensive and offensive roles to get the best out of their team.

Another new development talked about changes with the Technician role and new gear that they will be receiving:

· Remote Repair Kit – The ability to repair turrets without the need to sit on the spot and defend them, giving the Technician more tactical ability. 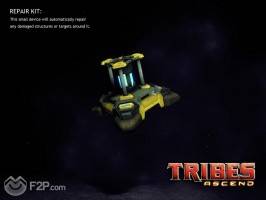 · A New Turret – This solo rate of fire turret does less damage but makes up for it with a longer range. 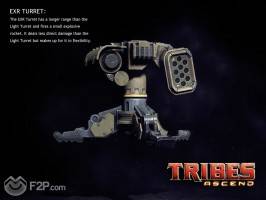 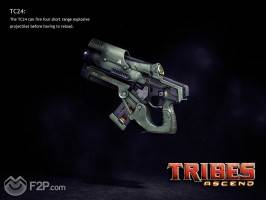 For those looking to invest some of their cash into this Free To Play game Hi-Rez will also be adding voice packs from Tribes 2 as a purchasable cosmetic item, something that should please the diehard Tribes fans who have followed the series.

Speaking with Bart it was clear that even with the release of Smite the Hi-Rez guys hadn’t forgotten about Tribes and were still trying to give their loyal community the attention they deserve “There’s a lot of attention on Smite, but Tribes is still my baby”. One such example was about the success they have had with the North American Star League (NASL) Tournaments where players are able to compete with each other for prizes, something they are now looking to bring over to Europe for their European players.

Similarly to show their commitment to the community Hi-Rez are teaming up with a player group called the Sandbox Clan, a group focused on helping players new to the competitive/PuG scene who want to learn to play the game. Run by a Tribes Ascend player called “Greth” the Sandbox Clan will be hosting a Newbloods Tournament where new players can compete for prizes, something that the Hi-Rez guys are going to be promoting through their own website and forums.