Not the most active population, Quickmatch games can take a while to build up a decent number of people and it sucks to start on the outnumbered team

After our break for the holidays we had the pleasure of checking out Tribes: Ascend from Hi-Rez Studios for our first review of 2016. We’ve been aware of the game for a while, watched videos, updated news, but never actually played the game. It’s been around for a few years now (Apr 2012 initial release) so we were half expecting something a little clunky and looking a bit crappy to be honest, though we’re happy to report it was far from it; the game looks decent enough and the controls and general gameplay were pretty fluid, but we’ll get onto that.

The Tutorial mode had a few options, but we decided to only try out the Skiing mechanic, a unique feature to the game that we had no idea how it worked (we could fudge the rest as the game is a classic WASD first person shooter). Essentially when holding space your character starts to ski, gliding along the floor and picking up speed depending on the gradient (downhill you go faster, uphill you slow down) and is a quick way to get around the map. This is balanced with a jetpack for getting uphill or flying to higher vantage points, getting used to switching between skiing and a quick jetpack glide as you’re travel really helps you pick up some real speed and using it in battle is essential. 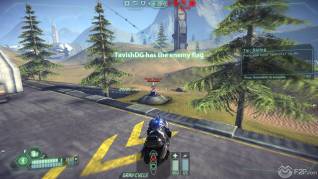 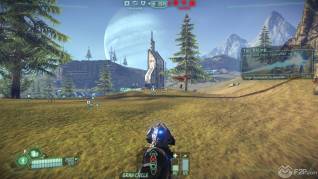 Quickmatch queued us into a team based Capture the Flag game, we could choose from three classes (Light/Medium/Heavy) and up to nine different loadouts, which was recently expanded, though we didn’t have any gear so we could only use the default weapons. We were automatically thrown into a game and could pick a team, not that it mattered as to start with it was a 1 v 1 with me and another guy, with 125 lives for the team and 25mins on the clock it looked like it might be a bit of an arduous battle. Fortunately as the game progressed new players jumped into the game and started to flesh it out, these players were carried into the next map automatically which meant a room could build up over time.

Starting out with the 1 v 1 wasn’t too bad though as it gave us a chance to zip around the map and get an idea of what we were doing; the game was Capture the Flag and you earned points for keeping hold of it (there are traditional capture and return games where you must take the enemy flag back to your own flag to win a point). 1 v 1 was a little imbalanced as the guy I was against just didn’t have my mad skills and once I got the flag I was pretty much dominating him, by the time other players joined I’d already accrued far too many points for there to be an feasible comeback and so it did mean just playing it out until the next game for them unfortunately. 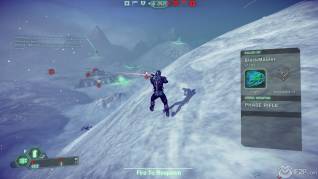 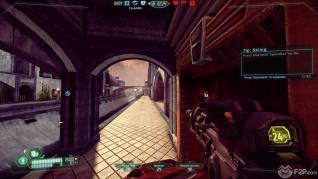 Jumping into a more balanced game to start out was fun, the skiing mechanic really comes into play in Capture the Flag as you are constantly having to pursue the enemy if they have the flag, keep away from them if you have it, or keep up with your team mate if they’re carrying. It’s pretty exciting and a lot of fun, and some simple team work really helps to retain possession, the hardest moments were finding that your team were fighting some people on the other side of the map whilst you were being gunned down by the remaining enemy actually trying to play!

There’s a variety of structures and landmarks on each maps, generally at the centre of the map, then the surrounding terrain is a mix of hills, valleys and cliffs to really get your skiing going. Occasionally one team would try and take a stand and have a gunfight at one of these locations instead of just skiing around the pretty huge maps, but for the most part it was a cat and mouse constantly heading towards the little flag icon.

Every class has a variety of weapons to choose that will cover them for different ranges, generally a short range weapon (automatic rifle or shotgun), explosives/artillery and then a long range sniper rifle that has a zoom function. Switching between them is simple and necessary as you quickly burn through ammo, thankfully there are ammo refill points all over the map to keep you combat ready. 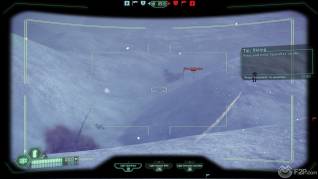 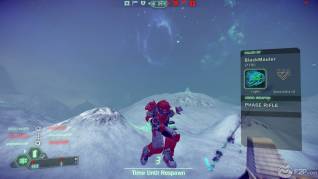 We got a chance to try out the new Perdition map through QuickMatch, an alpine style map with two small lakes with accompanying base, in the middle of the lake is a platform where the team flags are inconveniently placed. The map is very small and quite intense, which is fun if you load up with a team, but as we jumped in the game we soon found ourselves in a 2 vs 1 situation with us as the lone wolf; the map is way too small to keep away from the enemy (plus constant icons always show where enemy players are so there’s no option for stealth). The result was five minutes of just getting ganked over and over and it being pretty impossible to actually get the enemy flag and return it to my base; this ended with us quitting the match and being a little salty.

From the couple of hours we spent playing we have to say the game is definitely fun, the break-neck speeds that you’re whizzing around the maps and a really fun and tactical element, which comes into play more for some maps over others. With the new maps and content updates it’s good to see Hi-Rez haven’t let the game go without any updates and will hopefully keep it going for a little longer, as far as FPS games go it’s worth giving a shot given the free to play ticket.