We have inteviewed MrSaturn, lead Game Master and Project Manager for Mission Against Terror. If you are wondering about playing MAT, you should read it. 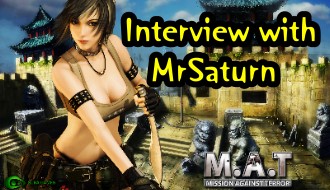 Now that everyone knows you, how would you describe MAT in a few words?

Answer: Something for everyone as Id like to say. Weve got serious game modes found in most traditional shooters and weve got game modes that arent so serious featuring some fantastical characters.

Within the FPS genre, what does it make MAT different from the rest of games?

Answer: MAT appears to take place somewhere around the present day with its assortment of weaponry and the clothing/appearance of the characters in it, and you can certainly play that way if you wish. There are also gameplay elements and game modes that dont fit within that boundary. You can dance for health (which provides a third person view of your character) and throw polymorph grenades to transform your enemies into cute little animals for instance. In terms of game modes, youve got game modes that cater to the audience that like that realistic feel in their shooters but youve also got game modes that are a little different where you go up against mummies, phantoms, robots and tanks.

Could you go deeper on the relation with the World Online Gaming League? What do you expect?

Answer: We partnered up with World Online Gaming League (WOGL) even before we announced that we were publishing Mission Against Terror in North America. Weve been working closely with each other ever since. Our partnership with WOGL means that we will be stepping into competitive territory with MAT. We also privileged to have MAT be the first game to use WOGLs brand new and comprehensive ladder system. We plan on holding major tournaments and competitions in the future.

One of our readers wonders about Dolby Axon technology, with which you can modulate your voice to make you sound like a member of the opposite gender. What can you tell us about?

Answer: We have two modulation items in the game currently, one intended to make you sound like you are of the opposite gender (male to female, and then female to male). If you are a male and you get the modulator that is intended for a female to sound like a male as an example, your voice will get deeper. Its a fun little feature that makes voice communication a little more interesting. Its possible that there will be more modulation options in the future with this kind of technology as well. Dolby Axon also enables 3D voice positioning.

We can say there are many game modes, enough to fulfill everyones necessities. But, whats the favourite mode of the players? The most played one.

Answer: Right now it seems to be Phantom Mode, likely because it was introduced in Open Beta so its newer than the rest. Team Deathmatch is highly popular as well.

Our editors have tested it and their favourite mode is the mummy one. Its very original. How did you come to do something like that?

Answer: Weve seen a few games that have a survival horror mode of some kind in them and with the success of games like Left 4 Dead along with the general interest in zombies in movies and that sort of thing nowadays, its only natural. Mummies in and of themselves are fairly unique but realistically theyre not much different than zombies. What mummies do allow for however is for some interesting scenery with Egyptian-inspired locales and certainly there will be more maps in the future with this style.

From your point of view, why MAT is more fun than the rest of FPS games on the market?

Answer: MAT was built with anti-hacking as a focus. While its not 100% hack proof(nothing is really hack proof), we have developers that have worked on security software, and they have worked on and continue to work on MAT. Many free to play FPS games have a big problem with hackers and we have been assured that hacking will not be a big issue in this game. Besides a low presence of cheaters, the variety of game modes and future plans to expand upon the current content of the game will have gamers, not to mention the growing competitive scene.

What will we see in the future? Is there something in your mind? New content? New maps? What can you say? Whats the plan beyond Christmas?

Answer: The clan system is set to debut in October, which is touted to be one of the most(if not the most) comprehensive clan system in its genre. October also has a Halloween patch. December will most likely have a Christmas patch and February will likely have a Valentines Day patch. We also have at least 3 more game modes, tons of maps, weapons, clothing and items that we have yet to release. Its going to be an interesting ride on the road to all this content delivery and were likely going to deliver it in increments.

Finally, do you have something to say to your players directly?

Answer: If you are interested in trying out Mission Against Terror, please visit its official website, where youll find everything youll need to get set up. Youll also find a weapon listing, maps, game modes and other great resources.