Celebrate 15 Years of NosTale with a Battle Pass, Contest, and Events!

Gameforge — the leading publisher of popular free-to-play multiplayer online games including AION, Metin2, and Swords of Legends Online — prepared a haunting ghoul-d time for the spookiest month of the year! We’ve got NosTale and OGame celebrating major anniversaries with big events, AION, Metin2, and SOLO in the holiday spirit, and I See Red preparing to drape a vermillion cloak across PC screens. There are no tricks here, so enjoy all of Gameforge’s treats!

Congratulations, all you NosTale players, for helping the game hit a major milestone! Naturally, Gameforge is celebrating with all sorts of special events. A new Battle Pass is in effect until November 2, with a celebratory Gloopy Cake, an 11th Anniversary Costume (Permanent), and a chance to get an anniversary-themed title.

Until November 2, The Great Collector’s Event is also running to honor the N, O, S, Y, E, A, R. If you collect those letters and the number 15 as you play, you’ll be able to get special prizes from Mimi Mentor. If you get N, O, and S, you can refill Specialist points. Grab Y, E, A, R, and 15, and you’ll get a 15th Anniversary Buff to increase your HP and MP by 10% for 53 minutes. The best reward comes if you get every letter and the number, as the 15th Anniversary Medal reward increases your attack and defense by 10% and makes you and your NosMates earn 10% more experience for 15 days.

There’s also a hint of things to come. Gameforge is offering players a chance to tell the story of four new specialists who will join NosTale later in 2022. The ten top authors will get the “Wordsmith” title and rewards like a Baby Panda for helping to introduce the Archer, Mage, Martial Artist, and Swordsman. Some of those same stories will also be used to help craft the quests that introduce each one to the world.

Fangtastic Events in NosTale for Halloween 2022! 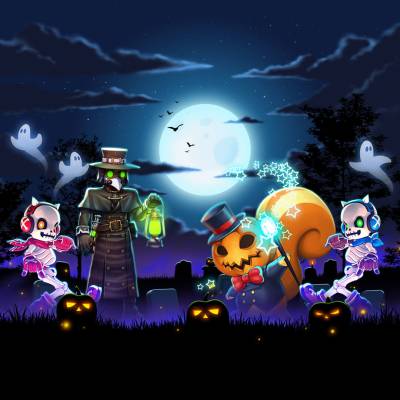 Tiny spideys are creeping in, more and more of them. ‘Where could they all be coming from?’ you ask aghast. You answer the door, and find a cheeky pumpkin grinning back. What’s this gloomy mood that has overcome you? You check your calendar and see the date. It’s the end of October. Time to celebrate: Halloween!

Get ready: from 26th October to 9th November, NosVille and Port Alveus will be decked out in eerie Halloween decorations and the mad Professor Macavity, Foxy and Jack O’Lantern will be causing all sorts of creepy mayhem in NosTale! An additional quest, a Halloween costume and a title with powerful effects are also waiting for you!

Jack O’Lantern and His Minions

Defeat the evil pumpkin Jack O’Lantern in the raid! He’s supported by his Pumpkin Bushi and Pumpkin Bomb minions. In reward for victory, you can claim a Halloween raid box.
Amongst others you can pick up a Glowing Pumpkin Hat and creepy Tarot Cards from the raid box in this event.
Foxy and Her Brood

Challenge Foxy and her sneaky brood in the raid! Use Foxy’s Raid Seal to confront her. If you’re successful, you’ll earn her Wonder Chest in reward. With a little luck it might contain Foxy’s Specialist Partner Card!
Foxy is a raid boss with super skills, as well as being a new partner. Tame her and she’ll be your loyal companion forever!

The raid seals can be picked up in daily quests. Plus you can earn more rewards by collecting flasks.

The mad genius feline is back! Rally 7 players around you and start the raid. Two of the eight players will be transformed into Professor Macavity and the Test Subject. Let the hunt begin!
Full details on the raid:

In reward for each of the three Halloween raids there is one of these titles in the raid box:

Talk to Mary in NosVille to start the quest and earn yourself a new title by successfully completing all three Halloween raids 13 times! The ‘Monstrous’ title gives you a 2% chance of triggering Horror when you attack.Daily Quests from NosVille NPCs

Talk to Eric, Eva Energy, Malcolm Mix and Teoman Topp and pick up handy items in the Trick or Treat Quests! For example, you can get Yellow and Black Pumpkin Sweets, the Halloween Blessing, a Glowing Pumpkin Hat or a Halloween Costume Scroll. Playing the quests will also get you Bags of Sweets which can be exchanged for Jack O’Lantern’s raid seal.

Pick your favourite monstrous costume and give enemies a good scare: during the event period, the Plague Doctor/Nurse Costume will be available in the NosMall.

When you use an attack skill while wearing this eerie outfit, you have an 8% probability of receiving a 10-second healing effect which restores your HP by 5% of the damage dealt (maximum of 1,500 HP per skill). You also benefit from a 20% increase in champion experience and an additional +1 movement speed.

Released in September 2007, NosTale has a very large and friendly global community that warmly welcomes new players to join in on their adventures through a world full of mystery. NosTale is available in nine different languages and can be downloaded from the official Gameforge site and Steam for Windows PC.

NosTale is a free-to-play anime MMORPG in which players head off to an exciting adventure in a land full of secrets as they master dangerous missions, tame wild creatures to turn them into companions and battle enemies alongside their friends.

The game offers varied activities, allowing players to create their virtual home in Miniland, invite friends, have parties or just relax from their exciting every day life as the hero.