Brick-Force, the unique cubic MMOFPS by Infernum Productions, has just announced the arrival, today, of a brand new season called Bricksaga. This new content update adds to the game a whole new set of gameplay possibilities with the new medieval weapons and costumes, new interactive bricks and more. 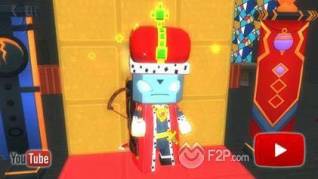 The new interactive bricks let you create some very nasty tricks and strategic dynamics through the use of trap dors, spike traps, portals and a lot of other tools.

Moreover, Infernum has further revised the Item Shop mechanics and the level progression in order to offer a smoother and more satisfying gameplay experience to the new players.

"Brick by brick - our players create countless new maps every day, fight action-packed matches for victory and ensure that Brick-Force stays No.1 among the sandbox shooter," says Daniel Ullrich, Chief Operating Officer at Infernum Productions AG. "We expect hundreds of thousands of new matches in the first few weeks and are pleased that we can contribute to that. With Season 3 - Bricksaga we bring many new features, costumes and weapons in the game. New game modes, and the medieval theme make for a completely new setting. Thus, Brick-Force has become another world again. It is particularly important for us to make the game more fair and beginner-friendly together with the community, which is the first step we want to achieve with Season 3. Our goal is more fairness and more fun - brick by brick!"