Atlas Reactor: The Good & The Bad

Atlas Reactor: The Good & The Bad

Atlas Reactor is a fast "simultaneous-turn based strategy" where players battle each other in team based battles, with a cast of unique and colourful characters this futuristic themed game has some truly unique elements with some exciting tactics where players must not only work out their own strategy but second guess what their opponent's will do as well. So is this reactor on overdrive, or is it gonna blow? Read on!

Simultaneous Turns - During a round players all get to choose what they do in the next turn whilst the timer runs, when the timer runs out certain action types occur in a specific order, so players must guess what their opponent is going to do next, attack the square they think they will be on, and try to evade attacks they think their opponent might make making a complex tactical strategy

Cooperative Gameplay - Working and communicating with a team allows players to double up on their attacks which can provide synergy to each other, adding a whole new level of team based mechanics to the battle

26 Customizable Characters - Beyond the various characters class roles and unique skills, each character can be customized with a variety of character only or generic modifications, allowing players to shape the character more into their preferred playstyle

Fully Free to Play - From the beginning of this year the game went fully F2P and now players can earn their Freelancer characters, Mods and Master Skins by playing and earning "Flux", where previously they needed to purchase them with premium currency (or only use the free characters on rotation)

The Bluff - Unlike the majority of other games of this type that typically rely on quick reflexes and reaction times, the fact that Atlas Reactor has a turn timer gives players the chance to think and actually bluff their opponent; where a dash here or an attack there might seem like the most obvious/optimum strategy, players can quite easily fake it and head in a different direction keeping their opponent guessing!

F2P Players Hinder Teams - Typically this comes in the form of players not being able to pick up needed characters during the team draft because they are F2P and simply don't own them, this can create some serious issues for the rest of the team versus a team with paid players who already have all the characters unlocked

Really Poor Promotion - Unlike other titles Atlas Reactor just isn’t one of those games that gets talked about a lot, or that you see being advertised a lot, which is a shame because it is a great game with a bad marketing strategy that makes population growth difficult

Generic Maps - The maps just don't feel all that different; whilst some offer more or less cover and open spaces, there isn't enough diversity or unique elements to each individual map so the map choice doesn't feel all that important

Limited Game Modes - The core gameplay is 4v4 trying to score 5 points through kills, whilst there are variations on this with custom mode (5 v 5, increased turn timers, multiples of a character on a team), other than the new "Extraction" (keep a case and keep it away to score points) the game is severely limited on game modes

20s Turn Timer Tough for n00bs - With each turn there is a lot to take in, what your enemy just did, what they will do next, what you can do, what's on cooldown, what your team want you to do; with only 20 seconds to decide and take your actions it can be very demanding on new players 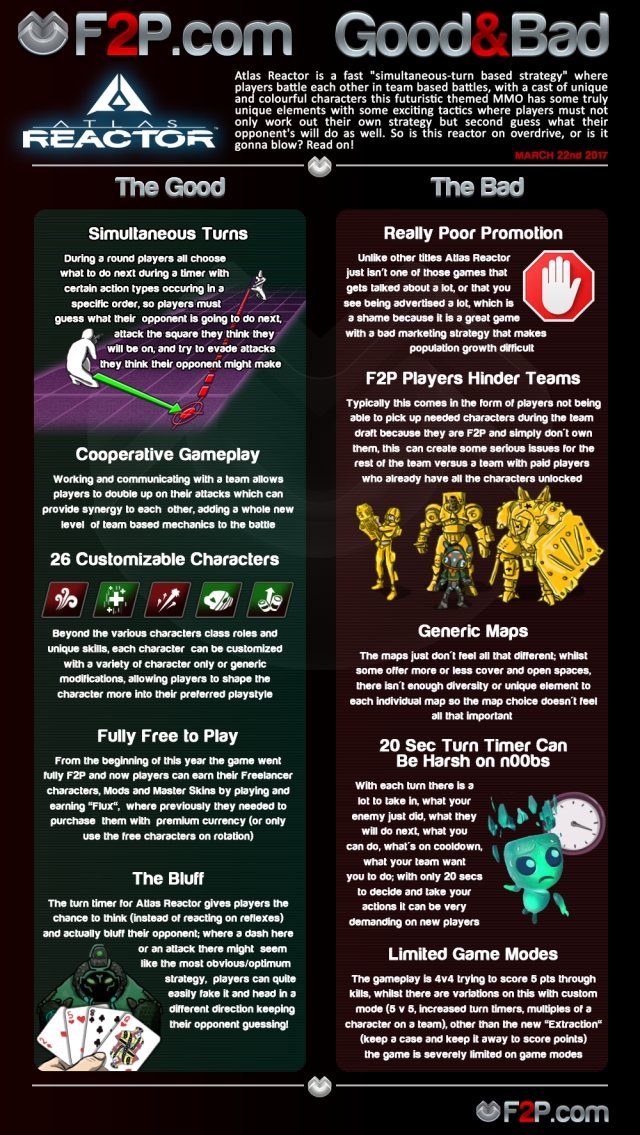