ArcheAge is a fantasy themed sandbox MMORPG in which players can carve out their own lives in a huge open world, claim and run their own land and households, craft, trade and explore. With strong PVP elements players will be able to battle against each other in huge sieges and even naval battles in huge crew run ships. With a lot of great features available ArcheAge isn’t without its downfalls, so let’s take a look at the game...

• Real Open World - Players can travel to pretty much anywhere and will rarely experience a loading screen apart from instanced dungeons.

• Tradepack System - Players can transport tradepacks to make money, they can only carry one in their backpack, but can carry more with vehicles and gain more money the further they transport them, even across the land in caravans or across the ocean aboard ships.

• Piracy PvP - As part of the Tradepack system players can also play the role of bandit or pirate, attacking other players trying to transport tradepacks and stealing them for themselves.

• Skill Based Characters - The game has no fixed classes and players can choose from 10 Skillsets such as Shadowplay and Sorcery making a stealthy mage assassin!

• Mounted Combat - You can battle atop of your mount using their own abilities or firing off your attacks and spells whilst riding around on the back of your Snowlion, Horse or Dairy Cow

• Court and Prison - Stealing crops, killing the same faction, and other crimes can land you in front of a court of real players who pass sentence and give you a Prison sentence (isolated in prison for a number of minutes depending on your crimes) where you can break rocks to reduce your sentence!

• Regrading - Gear has 12 grade levels and players can improve their grade/quality, which has a higher % fail rate the higher the grade and can even destroy items. However, players can pay real cash for "Charms" that increase your chance of a successful regrade, forcing players to spend money to upgrade without potentially losing gear.

• Labor Points - The game has an "energy/stamina" system known as Labor, where everything you do (craft, opening loot bags, farming, regrading, etc.) uses these points and you need to wait a long time IN GAME for your Labor points to recover... or you can pay real cash to buy Labor Potions and regenerate it quicker...

• Endgame Gear $$$ - So many of the materials needed for crafting high tier gear can only be purchased in the cash shop.

• Limited Real Estate - There's lots of land in the game, but there's only such a small portion of it allotted to player housing/farms and so whilst housing is a big feature it is one that most players can't take full advantage of.

• Gear vs Skill - Whilst early game it is not much of an issue, at late game PVP is so much more about your gear and how much you have regraded and very little to do with actual player skill and gear score will dominate talented players almost always. 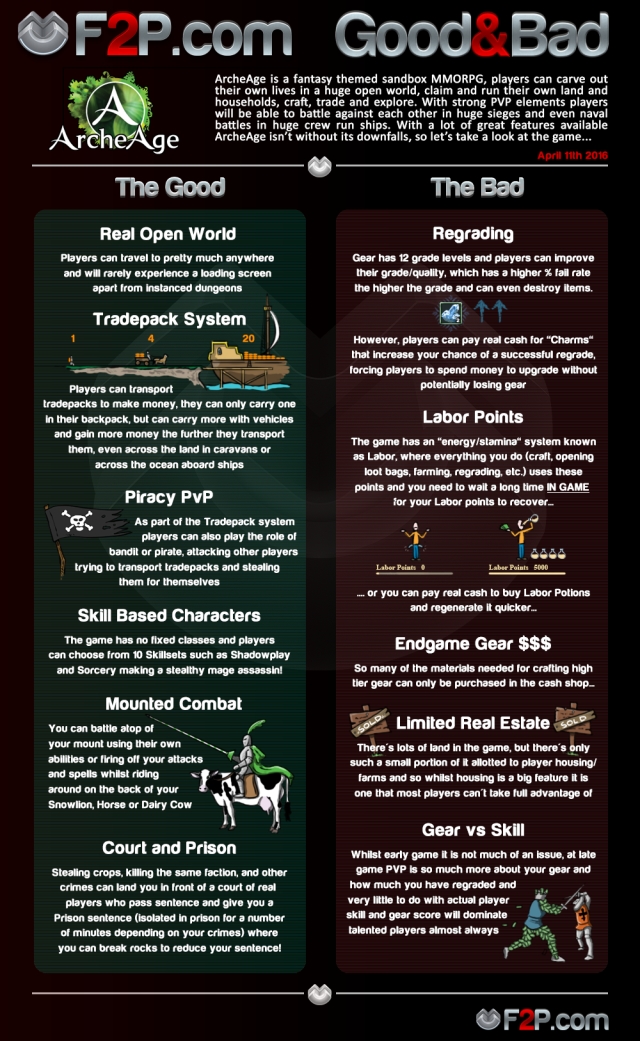