March 1, 2019 — Ahead of Bellator 214, World of Tanks Blitz announced a collaboration with MMA fighter, Aaron Pico. Ever since, the tank shooter has been in Pico’s corner, backing him to titles.

Pico is a mixed martial artist currently signed to Bellator, competing in their Featherweight division. He recently visited the development team responsible for World of Tanks Blitz and filmed a collection of short ads along the way. 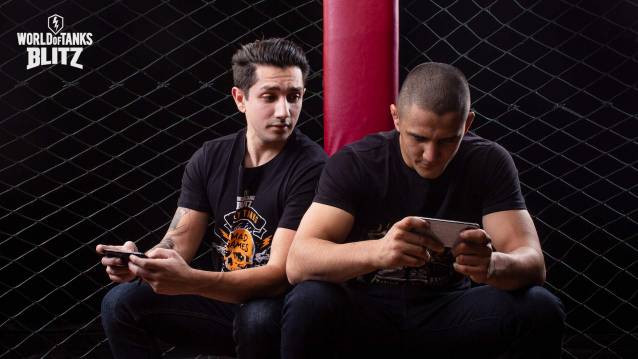 The concept behind each advert was a slight jab at things commonly associated with the sport of MMA and advertising agencies alongside the madness behind their pitches.

“We all sat down to come up with some ideas for the ad. We started with common preconceived notions of both mixed martial arts and the overenthusiasm and creative craziness that is born from advertising agencies,” states Thaine Lyman, General Manager, Wargaming Mobile. “We all know these are just misconceptions but by poking a little fun, we really thought it added to the humor and when we pitched it to Aaron, he really got into it!”

The combination of a mobile game and an MMA fighter might seem a little strange itself at first glance, but they have more similarities than meets the eye. Both World of Tanks Blitz and mixed martial arts are about strategy, tactics and, of course, the feeling of power. When discussing the sport, Pico had this to say:

“In this game, you have to have a strategy going into the fight because there are so many weapons that guys possess and so many options. To go in there blind would be an absolutely foolish thing to do.”

Pico’s challenge for belts and a player’s journey through World of Tanks Blitz share the same path: to succeed, whether it be in the cage or on the virtual battlefield, raw power isn’t enough. A fierce competitor needs a combination of skill, strategy, strength and savviness to overcome their opponents and claim victory.

About World of Tanks Blitz

World of Tanks Blitz is a fun, lighthearted approach to the genre that bends the rules of reality, putting an engaging twist on tank combat. Deep mechanics and realistic physical models across both authentic and alternative historical settings combine to create fluid gameplay and tactical diversity.