Artix Entertainment has published their first ever novel The Dragons Secret. Taking place during the Great Fire War in AdventureQuest (AEs first fantasy adventure game), The Dragons Secret tells the story of an apprentice mage and his many encounters with dragons, dwarves, and dark magic that will keep young adults spellbound. Reading is an award of its own, but in addition to the Novel and its 232 pages of endless adventure, The Dragons Secret unlocks exclusive items in each Artix Entertainment game using the special promo code found inside the front cover.

Written by Lyra Trice Solis, a member of the AdventureQuest storyline team, The Dragons Secret introduces its readers to John Black, a young mage who loses his entire family to a dragon attack and vows to get his revenge. John does not think things can get much worse until he discovers a secret about one of his best friends that pushes his loyalty to the limit. Throughout the story, John must choose between revenge and friendship and decide whether or not to risk everything to stand up for what he believes in. Readers embark on perilous quests with John and his friends as they escape confinement, battle dragons, stow away on a pirate ship, face off against an evil mage, and confront the underwater Council of the Mer. 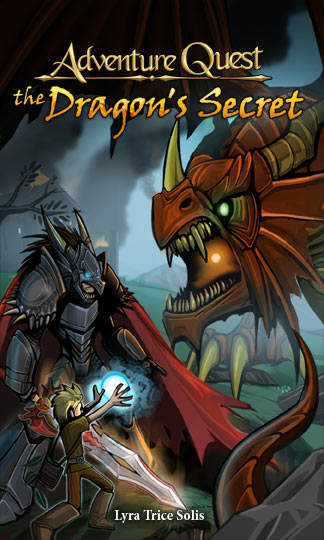