For our newest feature The F2Peer Review we went in search for some of our community members to get their opinions on some of your favourite F2P games out there, we searched far and wide for a broad spectrum of players to voice their thoughts on the games we asked them to check out and hopefully give the rest of you a more varied set of opinions. Each of them have key areas of games that they love and loathe that they’ll be focusing on, but as ever we want to hear your opinions on what you think as well!

First up is user JimSlam who is a self-confessed e-sports fan, both watching and participating, he generally leans more towards the PvP aspect of games or end-game content where he can compete. IAMJohn says he enjoys games but doesn’t get to play them as often as he liked, focusing more on titles with strong solo content that he can play casually without the pressure of groups or guilds. KittyPride says she actively plays MMORPGs preferring the exploration and discovery element of games, trying to find new places or pick up rare items and collectibles. Of our submissions we have to say that Ballgon was probably the most.. passionate… about the F2P genre in general, tries a little of everything but in his own words “I’m sick of seeing the same games reskinned and regurgitated over and over, it’s about time Developers started making something new”. Tenbrae is our resident roleplayer, who has dipped in and out of the RP scene most of her MMORPG career, running her own RP communities, she is a sucker for character creation and customization. Elijah is a proclaimed gamer nerd and probably our most hardcore gamer, at least in terms of how much time he plays (he says around 10 hours a day!). Finally Your_Nemesis is our granddaddy on the block and has been online gaming for a good 18 years so he reckons he’s been there and seen it all.

So introductions done, we asked our players for their opinions on… Hearthstone. 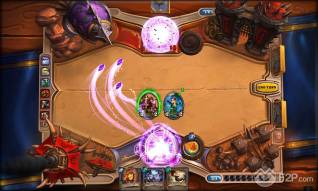 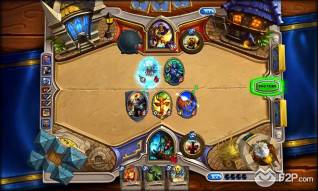 JimSlam:
Hah, funny you should have started with Hearthstone as I actually play this all the time, so I’m pretty biased. I’m active in a few different MMOs and this is definitely one that I check in for a few hours nearly every other day or simply watch some of the streams or popular YouTubers games. What I always liked about it was how easy it was to get started, but as you start to climb the ladder and see some of the higher level cards and deck builds it’s always interesting to see just what kind tactics people come up with, combinations you would have never even thought about.

If you’re a casual then the game is still pretty fun I think, but the more you play the better you get and the more you learn, so it’s well worth putting the time aside and watching some of the pros play to get a better insight into the game. Like they often say, it’s easy to pick up; hard to master. In comparison to some other TCGs it definitely confirms that Blizzard know what they’re doing.

IAMJohn:
I’ve actually played Hearthstone a little as some of my friends are really into it so I’ve watched them play. Personally I thought it was pretty fun, though I think some of the classes are pretty imbalanced, at least as a new player, and are pretty difficult to play as. I made the mistake starting as a Warlock and I found it pretty hard to mitigate around the self-damage taking to draw cards without making myself too weak.

It’s a game I’ve kept installed though and one of those that I always gloss over the icon and think “Should I boot it up today?” but for some reason don’t, however, every time I do I always get lost in the matches and spend a couple of hours playing as it’s a fun game.

Kittypride:
Hadn’t played the game before but obviously knew of it, I’ve always liked the idea of trading card games but never really took the time to check them out so it was an interesting first encounter for me. The mechanics seem pretty simple, but the game is pretty challenge if you’re not used to the system and thinking with this kind of strategy. I didn’t do that much PvP, instead I got sucked into playing through the Solo Adventures trying beat each AI class using each player class so that I could get access to all the classes starting deck cards! You can’t go into these things unless you are well prepared!

Ballgon:
Boring game that, to be honest, has been done better by other people. They made it too simplistic and take away a lot of the strategy that make TCGs a challenge, essentially this is a lesser mans’/children’s TCG that will appeal to the strategically inept that can’t really handle a more in depth system.

Save your time and play something else, if the annoying dwarf jabbering away all the time doesn’t make you instantly reach for the uninstall button (or jam a pencil in your ear depending on which is closer) then the reskinned classes that all feel pretty much the same and the repetitive gameplay will. If it wasn’t made by Blizzard then this game would have failed a long time ago, but as ever the fanbois keep propping it up and shelling out cash #eyeroll #GetABrain

Tenebrae:
I love, love, love World of Warcraft, I didn’t love Hearthstone. Don’t get me wrong people, it’s not a bad game, but it just wasn’t for me this time. Already familiar with the classes I jumped straight into choosing the sexy Miss Proudmoore (that’s “Mage” to anyone unfamiliar :D ). It was fun to see some of the spells that you see in the game, hearing the voices of the characters you’ve come to know and love, but it just felt like if I was going to get anything from the game I’d have to put a lot of time in. As much as I wanted to really try and work out some good strategy, it just takes too long to work out what type of deck will work in a match. If you like card games then I think people will like Hearthstone.

Elijah:
I played the hell out of Hearthstone when it was first released and, if I’m being totally honest, have easily dropped a couple of hundred bucks, which I RARELY do because I usually spend enough time in a game that I can get everything I need just by playing. However, opening those trading cards is like a crack habit or Pringles (whichever you prefer), and once you start it’s really hard to stop!

So yeh I nip back into the game every so often and dust off the old decks, usually when a new release comes out and then I buy up a few packs, hardcore it for a few days straight and then drift again away! Hah! Good game though, graphics are pretty solid and you can tell the team put their heart and soul into designing it.

Your_Nemesis:
I used to play Magic the Gathering as a kid, so have quite a lot of hands on TCG experience under my belt, though Hearthstone was the first online one that I’d tried when it was initially released. I was pretty sceptical at first as MTG is a pretty robust system in terms of what you can do with your deck and how a match plays out, and everything about Hearthstone looked like it was geared towards a younger audience and considerably more casual.

I have to say I was pleasantly surprised and whilst I’ll still typically go for a system more like Magic (e.g. I much preferred playing Hex), I can see that it has its place in the market, but honestly I see it as being more of an introduction/tutorial into the genre until people want a deeper system.