Gameforge has announced today that in February 2013 the European version of his fantasy MMORPG TERA will be switching from the former subscription model to free-to-play.

Free-to-play model will have 2 types of accounts: free user and veteran (players that acquired TERA by purchase will be ranked as veterans). These accounts will allow players to enjoy the all the contents of TERA. This includes the races, classes, instances, equipment items and player versus player content for example, but also unique features such as the political system. Limitations exist for free users merely in the form of functional option restrictions, such as the number of character slots or the number of safe deposits available.

In addition to the accounts free user and veteran have the possibility of becoming a member of the TERA club, which has virtually the same benefits as current subscription to the game (those who have subscription will be members of the Club TERA automatically) as well as several advantages such as shorter cooldown times for instances, increased experience point yields or an epic mount.

Also with the arrival of the F2P version of the game, a new Dungeon and a new 3 vs 3 arena arrive at the game. 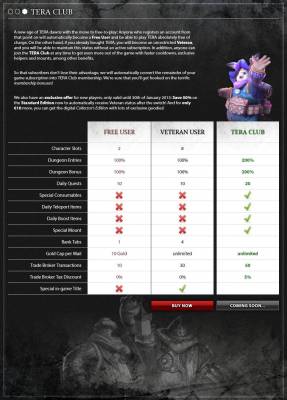 “We are very pleased to be able to in future offer the game content of TERA to its fans for free and in addition, to offer all who are interested the opportunity to see the quality of the game for themselves”, said Eva Schmitt, Product Director of TERA.
Source of information: press release of Gazillion Entertaintment