We had the pleasure of meeting up with the guys from En Masse Entertainment, the NA/Canada publishers behind TERA (in Europe the game is published by Gameforge) to check out a press reveal of their newest class; the Gunner. Logging into the game and joining the guys on a Skype call we were greeted by PR rep Tyler, Lead Writer Scott, and Producer Patrick who would be our main guide for the evening. We always enjoy jumping back in the game with these guys, they’re good fun and we do actually think TERA is one of the better MMORPGs on the market, so we were pretty excited to check out the new class for ourselves.

Logging in we were joined with another reporter and jumped straight into the game, set up as a max level 65, with what we were told was the best gun in the game acquired through crafting, a huge fiery mammoth of a thing accompanied with flaming wings and from butt to muzzle was about as tall as our character looking like something straight out of a Final Fantasy epic manga. It looked awesome, though the early guns come in different varieties with and some looking like standard guns, canons and crossbows, but they will all typically be bigger than the player.

As TERA is an action MMORPG it does mean that there is no target locking on and players have to aim with the reticule in the middle of their screen, particularly important for a ranged class such as ourselves, where if you fire a shot and aren’t pointing at the right target then you’re gonna miss. The class falls into the heavily armoured ranged DPS category making them powerful at a distance but able to handle enemies that do get up close and personal. There are two big differences with this class in comparison to the others, first and foremost is that unlike other ranged classes it does have a “run n’ gun” style where you can fire and shoot instead of all abilities requiring you to a stand still and cast. The second big difference is the Wisdom bar, which we will talk about later.

We loaded up next to a bunch of Spring Valley Intruders to get to grips with the controls and Patrick walked us through our different abilities, we have to say that given we haven’t played the game that much and had never seen the Gunner before it was actually incredibly easy to pick up, much to Patrick’s surprise we were quickly holding our own against the mobs.

So a rundown of the skills:

Mouse Attacks - Left mouse click was your typical normal shot, right mouse click allows the player to do a roll and reload skill allowing you to get in and out of combat a little bit quicker

Mana Missiles - one of your only charge up attacks, holding down the skill key charges up the ability, the longer you hold it the more powerful the attack as multiple glowing missiles fire at the enemy

Arc Bomb – it is a grenade that you toss towards your enemy, which explodes on impact and damaging nearby enemies

Time Bomb – throws a bomb to wherever you target and then, after a few seconds, will explode and hurl enemies up into the air dealing them damage

Replenishment - this isn’t an attack but replenishes both a players MP and their Wisdom bars, it also has the chance of cooling down some of your other abilities. Wisdom is pretty much a rage bar as you may see in other games, when starting out the only way to build Wisdom is by killing enemies but as you level up and acquire glyphs simply attacking will increase your Wisdom as well. If Willpower is stored up and unused it will deplete quite quickly over time if you don’t stay in combat, but once fully powered your Wisdom bar allows you to perform three extremely powerful attacks:

Burst Fire - this attack can be triggered with any amount of Wisdom, when triggered the player keeps mashing the spacebar button to keep firing one after the other in an awesome succession of powerful shots; the more Wisdom you have longer the Burst Fire is active for

Balder’s Vengeance - by far our favourite attack, the character charges up a super shot, jumps up in the air and fires a huge beam at the enemy which is powerful enough to even knock your own character backwards; it looks amazing

Aside from that we also have two different Constructs, “HB-7” a droid type character that you can summon for around 30 minutes with one skill and he can give you some heal and targeting benefits, you can also give it instructions to either stay or follow you on the same skill. HB-7s final skill gets it to lasso you and drag you directly to it instantly, which has up to 40m range, and will even recall you if you are knocked out. The other Construct is a turret which you can throw into the battle and will do some pretty good damage on your enemies automatically for a little extra firepower that you don’t need to think about. The final attack allows you to destroy all your constructs that you currently have summoned which will damage all enemies that are nearby. Pretty cool. After that we headed out a little way to fight some Orisk’s, and as Patrick was telling us how to attack the creatures we’d already Leeroy’d and jumped into the fight; they didn’t seem to give us too much trouble and we did have Scott healing us as his priest.

With the test we also got to check out the new EX TRM mount, which will be free for two weeks to those players that log into the game once the Gunner is released, but will then be available to purchase in the game store, and essentially looks like a new walking Golden “machine-ical” (coined by Patrick and is a combination of Machine and Mechanical) … thing, that kinda moves like a spider.

The class looks and plays amazing, and it is super exciting in comparison to the other classes that we’ve played previously, even killing the same creatures for the best part of 40 minutes we still really enjoyed blowing the crap out of them. The only really disappointing thing for many players may be that the class is a female only and bound to the Castanic and High Elf races, which we imagine not everyone is going to be happy about.

The class will launch on May 5th, along with the EX TRM mount and a number of events to celebrate the three year anniversary of the game; definitely worth checking out. 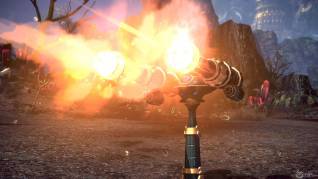 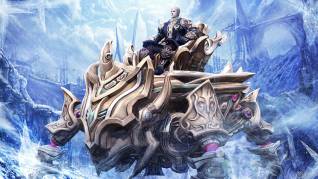